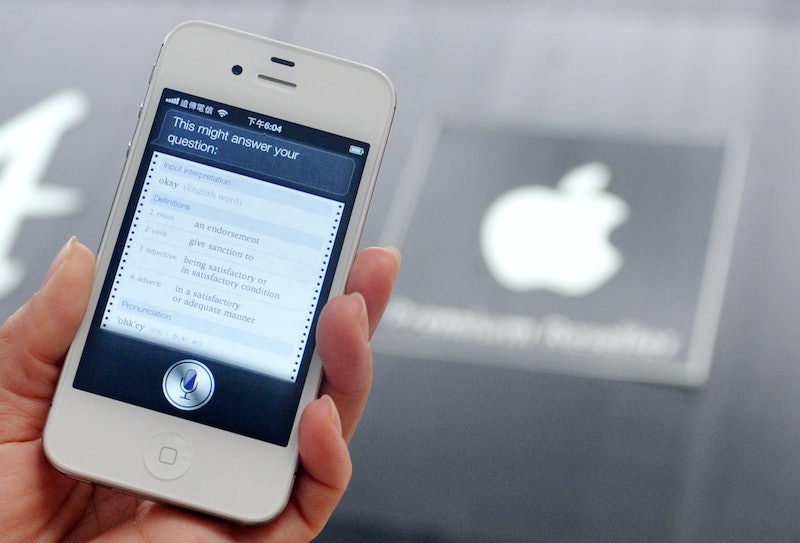 Halloween is nearly here, which means the time frame in which you'll be able to find a decent costume is rapidly dwindling. Luckily for the procrastinators out there, Apple has heard your desperate pleas and come up with an ingenious solution of its own, to combat the last-minute panic that accompanies a not-so-last-minute Halloween party invitation. With the latest iOS update, the tech behemoth managed to program in some truly hilarious Siri Halloween costume ideas as well as holiday suggestions that might even be better than a king-sized candy bar.

Of course, the operating system narrator doesn't exactly have all the answers. When I tried my hand at the spooky new upgrades and asked whether dressing up as sexy Donald Trump — yes, that's a real thing — was a bad idea, Siri seemed flustered. "I'm afraid I don't know the answer to that," she replied. It's alright, Siri, we all understand that confusion.

Still, the virtual assistant is able to dole out other sound Halloween advice and suggestions, even if she's a bit flummoxed by the loudmouthed real-estate mogul. For example: When asked whether she liked candy corn, Siri politely and diplomatically suggested that I try it with "a nice dry Chardonnay" (still gross). When asked about the holiday in general terms, she quipped, "I'm puzzled that there's a particular day humans dress in strange costumes and eat candy — in my dimension, we do this every day."

Siri's costume suggestions were even quirkier (and at times hilariously punny):

The first time I asked Siri what I should be for Halloween she came back with a dreadful joke. "You could dress up like chapstick and tell people you're 'the balm,'" Siri replied. Go ahead and face-palm with me.

Given that we recently witnessed a rare blood supermoon, this one feels particularly poetic. Also, it's an incredibly easy costume to assemble with the things in your own closet. Win-win, right?

Combining her first two suggestions (because the virtual assistant is a huge nerd, it seems), Siri suggested a spooky astronomical phenomenon which doubled as terrible joke that your 11th grade science teacher would have loved. "Dressing up as a black hole would be attractive," she suggested. Groan.

I'm still not sure whether this pun is clever, funny, or just downright terrible. After lamenting once more that I had no idea what to be for Halloween, Siri suggested that I don some scrubs and hold a few instruments. "Tell people you're an 'operating system,'" she replied. At this point, I'm surprised she didn't tell me a dad-joke too.

This one's for all the math geeks out there. I'm so sorry.

At this point, I was getting tired of asking Siri for suggestions (there are only so many hilariously bad puns you can take in one sitting), and was starting to get curious about Siri herself, so I turned the question around and asked Siri how she was planning to dress up for Halloween instead.

I'm not sure where Siri thinks she's going to find jeggings and a cat-sweater in her size, but alright.

Yowch. Siri is really not feeling the 2016 presidential field. Although, with candidates like Ben Carson, who compared women who had had abortions to slave-owners this week, and Trump still in the running... can you really blame her?

Mocking the fact that millions of people across the globe can't even leave their phones behind when going to the bathroom, Siri decided to throw some serious shade. "I'm going to dress up as the Force (Star Wars) because I'm always with you." Rude.

In case you're wondering, Siri was referring cheekily to the astronomical system of stars, interstellar dust, and dark matter, not the Samsung phone. Although, if she's not more careful with these terrible jokes, I might just have to trade her in for one of the latter.