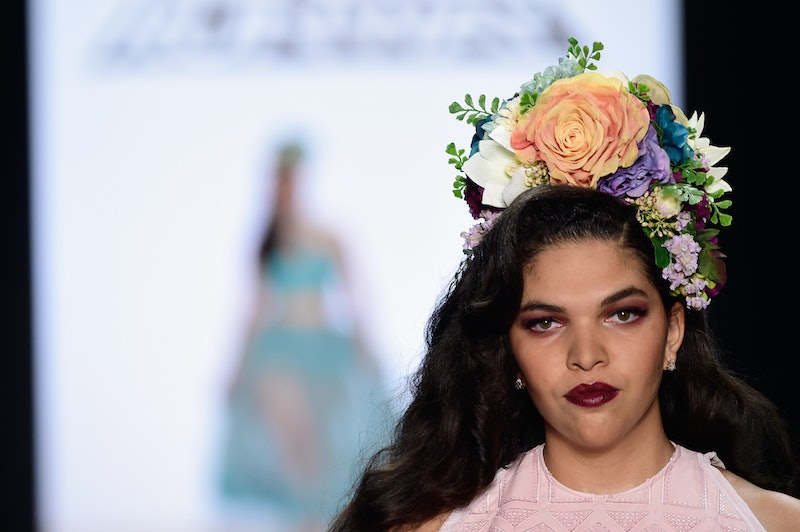 The final collections have been shown, the catwalks have been strutted down, and Project Runway's Season 14 winner has been announced. A huge congratulations goes out to designer Ashley Nell Tipton — who made history by being the first designer to win the American version of PR with a plus size collection, beating out the three other finalists to be crowned as the season's top designer. "I've just realized that things will never be the same after this," the designer tells me over the phone.

Tipton stunned judges and fans alike with the colorful, daring, and feminine collection she sent down the runway at New York Fashion Week. While the collections were presented anonymously during NYFW, many had speculated that the lacy pastel plus size daydream of a collection, which featured plenty of skin-baring peek-a-boo cutouts, belonged to Tipton. Bloggers, fans, and fashionistas of all types drooled over the collection, which was inspired by "Mexico in the 1950s," and which Tipton showed on plus size models.

Having people want to wear your clothes is maybe the most important part of being a designer, but having seasoned industry experts approve is maybe just as significant. The judges lauded Tipton for a collection they described as "bringing something new" to the plus size market, playing with silhouettes have been considered taboo on women of size, and the chic and imaginative flower tiaras that she accessorized her models with. This wasn't just a win for a talented designer — it's obvious that Tipton's collection was a huge score for the plus size fashion community and body positivity.

I caught up with Tipton Friday morning to talk about what comes next for her as the Project Runway champion. Tipton has been keeping the secret of her win for almost a month, but that doesn't mean she's been sitting back with her feet up and just biding her time until the news became public. "I've been a busy bee," Tipton tells me. "I've been working on my new logo, my website, finding a team that could be there the entire way with me, meeting with potential partners, there's a lot that I've been working on since then."

For Tipton, who was an indie designer who self-produced a line before being on PR, her win has fast-tracked her career immeasurably. "Once people hear what I've been working on, I think it's just going to explode. I definitely feel a lot of doors are opening up right now." For Tipton, the work now is picking new projects and collaborators carefully and deciding which doors are the right ones to walk through.

Tipton is thrilled with what lies next for her and calls what she is currently working on a "dream project [...] Not many people get the opportunity that I have right now."

Outside of her immediate future, the young designer has big plans, with her eyes set on creating an online plus size destination that "includes everyone." Tipton adds that she hopes to unveil unisex and men's lines eventually and isn't ruling out designing for non-plus customers in the future. "I don't want to put limits on myself," Tipton tells me. With vision, determination, creativity, and skill like hers, I doubt that Tipton will hesitate to succeed.

More like this
Instagram & Facebook May Finally Lift Their Notorious Nudity Ban
By Allie Fasanella
'Love Island' Tanyel's Latex Versace Dress Was Gifted By A Former Islander
By El Hunt
This 'Bachelor' Contestant Had The Best Reaction To Wearing The Same Dress As Another Woman
By Grace Wehniainen
Every Single Thing In Maya Jama’s 'Love Island' Wardrobe
By Darshita Goyal
Get Even More From Bustle — Sign Up For The Newsletter
From hair trends to relationship advice, our daily newsletter has everything you need to sound like a person who’s on TikTok, even if you aren’t.