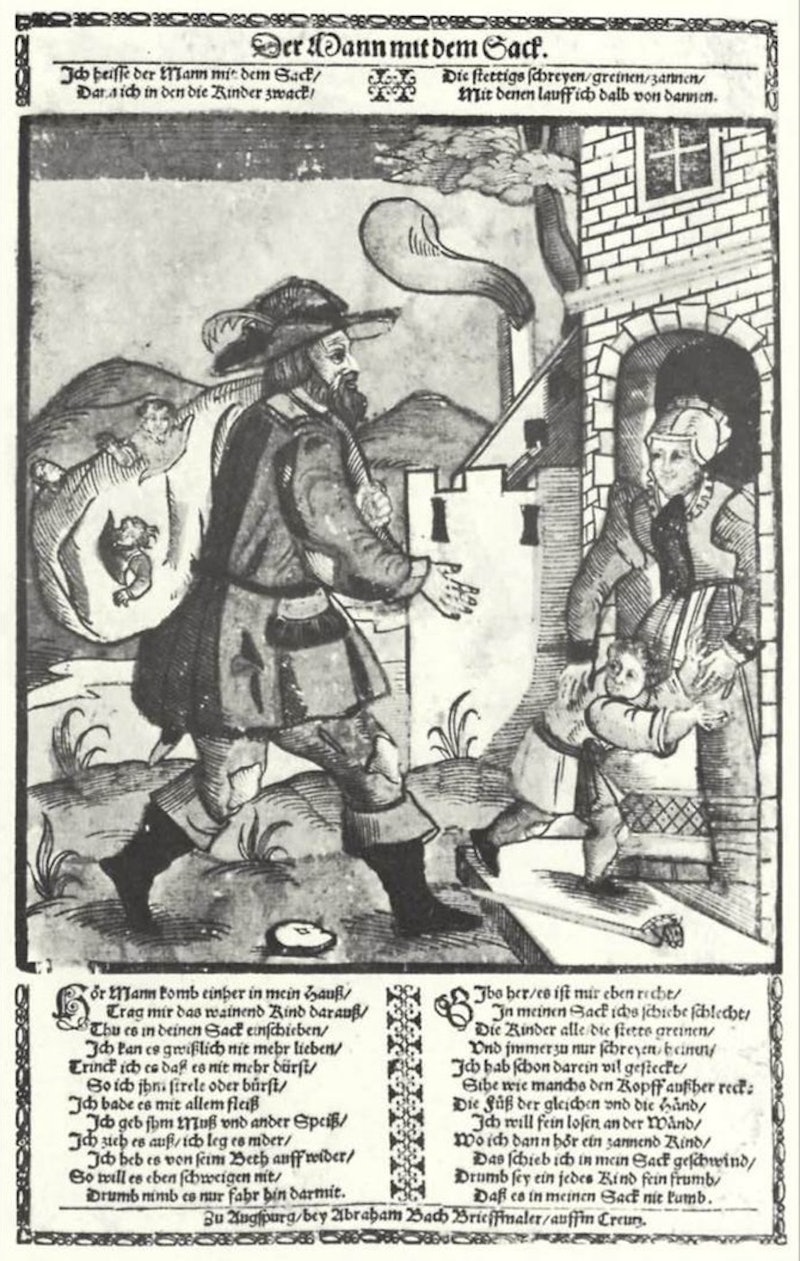 The holiday season (which runs from roughly Nov. 1 through Jan. 1, because who are we kidding?) is a time many consider to be the jolliest of the year. Everyone is drinking hot cocoa, giving and receiving gifts, and getting their eyelashes kissed with frost. What could be more perfect? But when something seems so pure and spotless, naturally there has to be a dubious flip side — and when it comes to the winter season in particular, there is at least one creepy holiday legend or myth for every snowflake that falls. Many of these spooky legends were invented to keep naughty children in line throughout the year, but the consequences of bad behavior are often much more severe than the ol' lump of coal.

Many of these tales and legends originate in Germany and other surrounding countries, which makes sense when you remember that Germany invented many of the Christmas traditions we know and love. Combine that with the fact that the country also brought forth some of the absolute creepiest fairy tales known to humankind, and, well... you do the math.

I know, I know — Halloween has been over for ages, right? It's time to ditch all things creepy in favor of all things cozy. But hear me out — some of these stories are just too ridiculous not to share. In case you weren't already shivering enough this season, here are 10 holiday myths and legends that will send a tingle down your spine.

Originating in the Alpine region of what is now Germany, Krampus is guaranteed to liven any holiday celebration with his signature form of cheer: Whipping misbehaving children. Krampus' signature look features fur, hooves, horns, and a long pointed tongue that would make any KISS fan proud.

He's such a popular guy, he even has a whole day (well, night, actually) dedicated in his honor. On Dec. 5, otherwise known as Krampusnacht, naughty children are guaranteed a visit from his royal creepiness.

The Yule Lads are a group of 13 Icelandic trolls who are essentially the equivalent of a Christmas frat house. Though their modern reputation is one of cheer, their origins are certainly dubious and involve things like leaving rotten potatoes in children's shoes.

The best part about the Yule Lads is their their ridiculous names. Particular gems include Window Peeper, Sausage Swiper, and Spoon Licker.

Perchta is one sneaky lady. The story of Perchta originates within the Alpine pagan tradition, in which she is a goddess. She is known as the "guardian of the beasts" and appears as either a beautiful woman or the classic hag that seems so popular in these traditions.

Perchta appears during the 12 Days of Christmas. In Austria and Bavaria in particular, she is said to check up on sleeping children in order to determine whether or not they have been good that year. If the children were good, Perchta will reward them. If not, the punishment is pretty severe: She'll cut open your belly and replace your intestines with straw. That's slightly more threatening than, say, a lump of coal.

Fun fact: "Perchta" is the origin of the English name "Bertha." So, you probably don't want to mess with any Berthas you know.

Despite having a name that sounds like a tasty German dessert, Belsnickel is no joke. Similar to many other spooky Christmas figures, Belsnickel is thought of as an anti-Santa Claus — though unlike others, Belsnickel travels alone.

He appears as a disheveled traveler, wearing furs and occasionally a mask. He also carries a switch or whip for the purpose of — you guessed it — beating naughty children. Some tales have Belsnickel appearing throughout the year to deliver his punishment, while others say he only appears on Christmas Eve.

Belsnickel is unique in that he's one of the few grim holiday traditions that has some preservation in the United States: This legend originated in Southwestern Germany, but modern Pennsylvania Dutch communities still share this legend.

Of course, everyone probably also knows Belsnickel best from that one The Office episode.

According to the world of Futurama, Robot Santa won't actually be constructed until 2801. But for our great-great-great grandchildren's sake, we should all be poised and aware.

Though Robot Santa was originally invented to bring presents to people around the world, a glitch leaves him with impossibly high standards and therefore an impulse to destroy everyone.

He goes by many names: The Sack Man, the Bag Man, or the Man With the Bag. However you slice it, though, he's uber-creepy. The bag/sack element is reserved for the misbehaving children he carries off after stuffing them inside of it.

What's most interesting about the Sack Man is just how universal he is. A variant on his character appears in numerous countries, including Brazil, Armenia, Georgia, Portugal, Spain, and more. The representation varies from place to place, as does the level of freakishness. Haiti, in particular, associates the Sack Man with Father Christmas: while Father Christmas brings cheer and joy, the Sack Man can be trusted to haul away any and all who dare misbehave.

It's not all Germany and Iceland that are bringing you the weird side of the holidays. France has its own patron of Christmastime punishment known as Père Fouettard. According to the legend, three children were once captured by a butcher who beat them repeatedly. St. Nicholas intervened and saved the children and was therefore recognized as a hero. The butcher became known as Père Fouettard and is forced to forever trail behind St. Nicholas in shame.

That doesn't keep him from continuing his antics, though. On Dec. 6, St. Nicholas strolls through the streets of French villages, accompanied by Père Fouettard. Whereas St. Nicholas brings gifts and treats to well-behaved youths, his accomplice is there to dish out whippings and spankings to those who don't behave.

Affectionately known as "The Christmas Ogress," Gryla is another element of the Icelandic Christmas tradition. She is, in fact, considered to be the mother of the Yule Lads — yet somehow she is worse than all of them combined. Beyond just leaving you a rotten potato, Gryla has no problem just flat-out devouring you if she senses you are misbehaving. Sometimes she even rounds up enough naughty kids to make a stew.

If you're a cat lover, you might feel some sympathy for this ogress after learning that her sidekick is none other than the Yule Cat, a giant black cat who — surprise! — also has a taste for children.

Though it's marketed as a tradition that's been in families for generations, the Elf on the Shelf was actually created just 10 years ago in 2005. The small plush elf accompanies a picture book that details how Santa sends out elves between Thanksgiving and Christmas Eve in order to determine who is behaving themselves (and therefore deserving of Christmas presents). Though Elf on the Shelf sales have managed to rake in more than $10 million in annual sales, many cultural critics have taken issue with the franchise, claiming that it bullies children into behaving.

More like this
23 Super Sweet Things To Write In A Valentine's Day Card
By Karen Belz and Lexi Inks
12 Aphrodisiac Desserts To Spice Up Your Valentine’s Day
By Kaitlyn Wylde
8 Things You Can Do To Appreciate Lunar New Year
By Elizabeth Tsung
8 Charities To Donate To During Black History Month
By Alexis Morillo
Get Even More From Bustle — Sign Up For The Newsletter
From hair trends to relationship advice, our daily newsletter has everything you need to sound like a person who’s on TikTok, even if you aren’t.