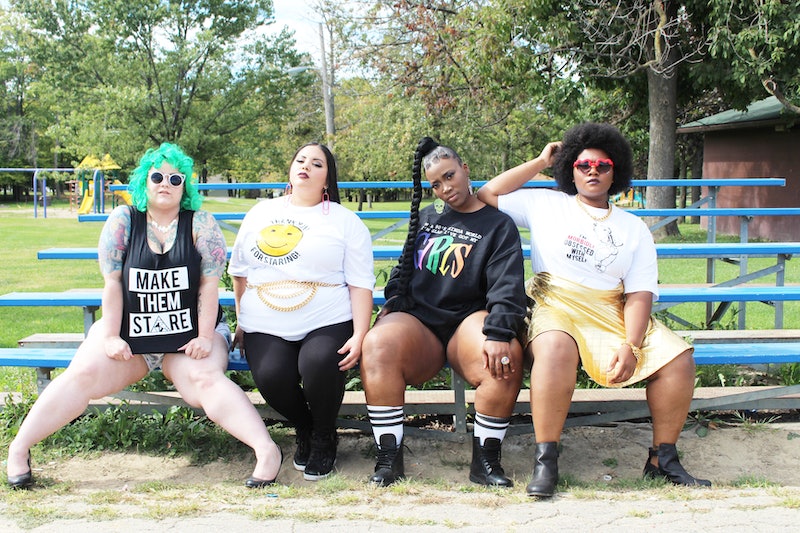 Most women who've been harassed for their looks probably don't feel very thankful. However, thanking her harassers for staring is exactly what plus size designer Alysse Dalessandro is doing with her brand Ready To Stare's latest line of plus size, body positive T-shirts for all genders. "Thank You For Staring" is a collection that fires back at the people who harass and body shame others on the Internet. It's inspired by Dalessandro's own experiences and plays on the brand's signature unapologetic style.

It's impossible for Dalessandro to remember a time before she was bullied for the way she looked or dressed. "I distinctly remember being told by a 'friend' that another one of her friends said, 'If I looked like her, I wouldn’t wear that,' in reference to me wearing a fitted neon sleeveless turtleneck sweater," the designer tells me via email. " I decided then and there that I wouldn’t apologize for what I wore or change it for anyone else."

As many plus size people on the Internet (myself included) know, bullying doesn't end when you grow up, graduate, or leave the high school hallways. In fact, oftentimes the harassment that is lobbed at fat women gets increasingly worse and much more violent with time.

If you look through my Twitter mentions from the past six months, you'll find a smattering of gems that the cretins of the Internet have to offer: Ad hominem attacks about my appearance, people letting me know that they think I'll end up lonely because my fat renders me unlovable, or the accusation that I lie about my lifestyle. While it always hurts to be insulted, looked down upon, threatened, and harassed, there are arguably few things as harmful and as affecting as the ways in which people dehumanize fat individuals, and women especially.

"I’m used to being called every name in the book, but the comments that still bother me are the ones that strip me of my humanity," Dalessandro says. "I have been told that I should kill myself, multiple times, just because I am a fat person wearing a bikini or posing on a basketball court."

The designer, who says she has never been able to post a photo of herself in a bathing suit without an influx of harassment, was targeted by Project Harpoon earlier this year, an Internet group that Photoshopped fat, happy, and visible women to make them look thinner. "I had my photo stolen by Project Harpoon and in response to the original post on Reddit someone said, 'Ugh just Photoshop her out of existence and do the whole world a favor,'" she recalls. "The only thing that these people knew about me was that I was a fat person and that alone made them want me dead. That is very de-humanizing."

For people who haven't been on the receiving end of such deplorable behavior, trolling coming from a computer screen might not really seem like that big of a deal. They might even think people being harassed should just tune out those emboldened by keyboards to spread hate, but that's something easier said than done. "It's hard not to be affected by this harassment, and I've learned that whatever reaction I have is valid and that I need to make sure that I do some extra self care when these things happen," Dalessandro says.

For most of us fatties, harassment and bullying happen so frequently — even in the spaces carved out specifically for body positivity, like certain Instagram accounts — that it can feel like we're never safe. "I feel very much a part of the community of individuals who also engage in this valuable work, but unfortunately connecting with that community online opens you up to being seen and targeted by people who make it their life’s work to hate on fat people," Dalessandro tells me. "These fat shamers troll our hashtags and follow our blogs just to hate on us."

Plus size blogger Corissa Enneking of Fat Girl Flow echoes those statements to me via email. "For some of us, our online environment is where we feel safe and understood. When your autonomy is taken, it makes you feel unsafe not just in your body, but in a place that you really rely on for daily support."

It was the need to feel empowered and the desire to respond to harassers (rather than log off and pretend they don't exist) that fueled both Ready To Stare's collection and the adoring responses from people who could relate. "This line was designed specifically to empower other fat individuals. It’s also definitely a statement to the harassers. It’s the clap-back that I always want to write in the comments but don’t," Dalessandro adds.

The designer says that while she loves all of her tees, picking a favorite is easy. "I am obsessed with 'I’m Morbidly Obsessed With Myself.' [...] I knew that it was really going to be a strong challenge to both conventional beauty standards and health concern trolling." Dalessandro adds that the shirt she considers to sport the boldest statement has actually been the most popular, too.

More designs will continue to pop up in this collection and Dalessandro, as always, is interested in what her customers think. She even hopes to create some shirts inspired by the experiences they share with her as well.

Personally, I dare to dream of a world in which my size isn't the thing that defines me. In which we let people who have bodies just live. As long as there's body shaming in this world, however, I'm glad that there will be a bold and stylish way to fight back.