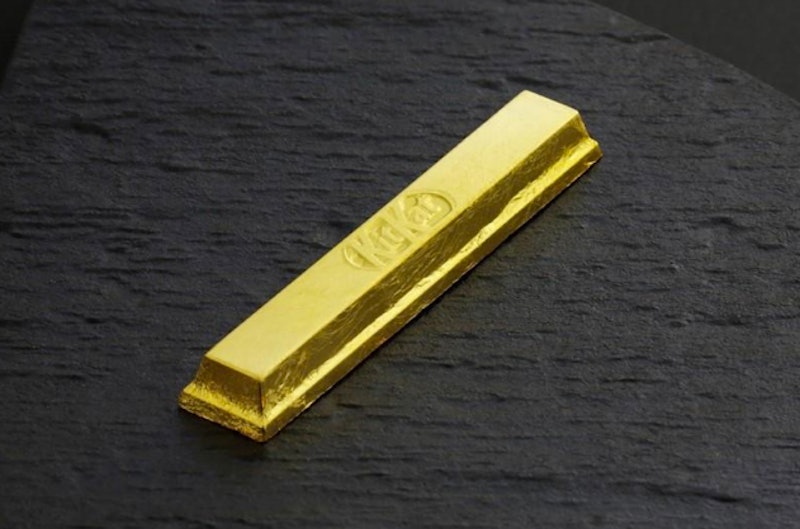 Talk about rich chocolate: One of Nestle's international branches just introduced the most decadent version of everyone's favorite breakable snack. You can actually purchase a Kit Kat wrapped in 24-karat gold leaf in Japan now. It's shiny; it's special; and most importantly, it's edible.

According to InterventorSpot, this literally rich treat is being crafted to commemorate the one millionth visitor to the amazing-sounding Kit Kat Chocolatory. And it's not just for eccentric billionaires, either; the candy, which will come as a single bar instead of Kit Kat's signature pair, will be sold for 2,016 Yen each. At the current exchange rate, this is equal to approximately $16. Essentially, you can decide between lunch at your favorite takeout joint and the most glorious candy of all time. I think the choice here is pretty clear.

Unfortunately, the golden Kit Kat is a Japanese exclusive and will not be available on our side of the Pacific; as such, we Americans will only be able to appreciate the beauty of a gold-covered Kit Kat from afar. If you're lucky, maybe you have family member or a friend in Japan who can send you one. They'll have to hurry, though — Nestle is only releasing 500 of these bad boys.

In honor of this gleaming Kit Kat, let's check out a few other spectacularly decadent treats, past and present. Are they ridiculous? A little — but sometimes it's nice to have ridiculous things.

XXIV Karat Grande Cuvee is the only thing better than regular wine: Wine with actual gold floating in it. The bottle contains a plethora of gold flakes that will make you look like you're in a Pitbull music video. And you won't even believe the best part: It's only $25 a bottle.

Sushi is hailed as a traditional, simple, and elegant food, but adding a touch of gold and diamonds might turn the whole concept on its head. Yet tradition didn't stop one chef from the Philippines from creating a five-piece sushi platter worth $2,750.

It's no surprise that in Abu Dhabi, one of the swankiest cities in the world, even something as simple as coffee comes with a touch of luxury. One hotel in particular serves up cappuccinos sprinkled with a dusting of gold. For $25, it could be worse — but when you drink as much coffee as I do, you'll have a daily coffee bill of about $500.

If you're really committed to a decadent lifestyle (and I mean really committed), you'll want to invest in these $425 gold pills. Pop one, and you'll see the results when you go to the bathroom, if you know what I mean. Just, y'know, in case you've ever wanted to poop glitter. Literally.

5. The Most Epic Sundae

Serendipity 3 is a New York City restaurant known for specialties like Frozen Hot Chocolate. Nothing else on offer, however, is more extreme than the Golden Opulence Sundae. Sumptuous Tahitian vanilla bean ice cream is drizzled with chocolate and 23k gold leaf. The ice cream feast requires 48 hours advance notice and costs $1,000.

More like this
15 Black-Owned Liquor & Wine Brands To Add To Your Bar Cart
By Alexis Morillo
12 Aphrodisiac Desserts To Spice Up Your Valentine’s Day
By Kaitlyn Wylde
16 Trader Joe's Appetizers That Are Total Party-Pleasers
By Kaitlyn Wylde
Dolly Parton Released 4 New Baking Mixes With Duncan Hines
By Alexis Morillo
Get Even More From Bustle — Sign Up For The Newsletter
From hair trends to relationship advice, our daily newsletter has everything you need to sound like a person who’s on TikTok, even if you aren’t.