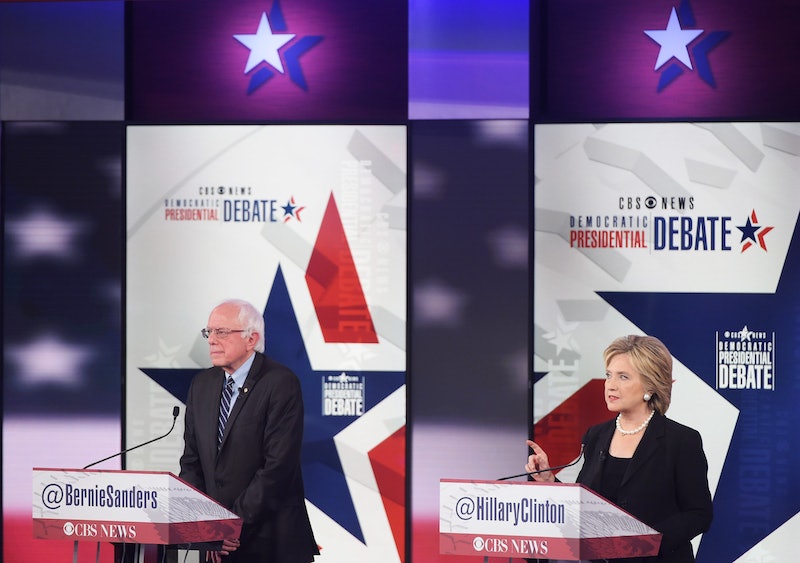 Now that Democratic long shot Martin O'Malley has officially withdrawn from the presidential race, the Democrats have just two candidates to choose from — Bernie Sanders and Hillary Clinton. In a recent Quinnipiac University poll of Iowa voters, it appears that those on the left are almost evenly split on candidates with 51 percent supporting Clinton and 42 percent supporting Sanders. It's unclear where O'Malley's four percent popularity will go now that he's no longer a factor in this primary election. This marks one of many moments in voting history where voters' choices were narrowed down to just two candidates. These five presidential primary races with two people show the precedent that has already been set for a moment like this.

On the Republican side, though three candidates have dropped out over the course of the primary election, there are still 14 GOP presidential hopefuls vying for the nomination. This also has its own precedent. The 1920 Democratic primary race had a dizzying 17 candidates at one point. Ultimately, the party's nominee of James M. Cox would fall short and lose to the nation's 29th president, Warren G. Harding. The primary race was so incredibly contentious that it took officials at the DNC in San Francisco until the evening until a final decision had been made and ballots were fully counted. History may very well repeat itself this year if all 14 GOP candidates hold strong and nobody drops out.

One of the closest primary elections to involve two candidates — both of whom would eventually go on to become president — took place during the 1976 Republican primary. Outgoing California Governor Ronald Reagan pushed the race between himself and eventual GOP nominee Gerald Ford to the absolute brink, nabbing 1,070 delegates. Ford only narrowly received the delegates needed to nab his party's support, finishing with 1,187. Democrat Jimmy Carter would ultimately win the presidency, serving for one term while Reagan would ultimately best Carter during the 1980 election.

1896 was a rather contentious year for the Prohibition Party. Rather than having two candidates face off with just one presidential hopeful emerging as the overall nominee, the party split into two factions. It was the highly contentious motion to endorse free silver rather than gold that ultimately divided the Prohibition Party into the separate "Broad Gauge" and "Narrow Gauge" factions. Ultimately neither nominee would win the presidency. That honor would go to Republican William McKinley.

The final year of the Greenback Party's existence saw two candidates face off — the party's chairman Jesse Harper and Massachusetts politician Benjamin Butler. The fact that Butler was chosen over the already established Harper shows the clear divide within the party, which had lost major steam following an economic upturn that rendered their platform of advocating for greenbacks (a form of Civil War-era currency) obsolete. Back in the late 1800s, the many third political parties that sprung up almost acted as lobbying groups for special interests and currency control. As you can see from the Greenback Party's collapse, the move was an ineffective one.

Formally known as the "Know Nothing" party, the American Party served as a partial precursor to the Republican party. The lone election in which the American Party formally nominated a candidate had its primarily European and Catholic members choosing between former president Millard Fillmore and George Law. Fillmore would ultimately receive the nomination but finish last in the overall presidential race.

Way back before conspiracy theorists had taken to online forums to lay out their negative assumptions about the shadowy organization known as the Freemasons, a political party had sprouted up explicitly against them. The Anti-Masonic Party held the special designation of being the first official third party established in the United States. Two confirmed nominees would face off in their primary election, with William Wirt beating out John McLean for the party's support. Ironically, Wirt was a former Mason who'd only recently began to decry the organization. The Anti-Masonic Party would pose a non-threat to the general election and wildly popular Democrat Andrew Jackson would go on to win the presidency.