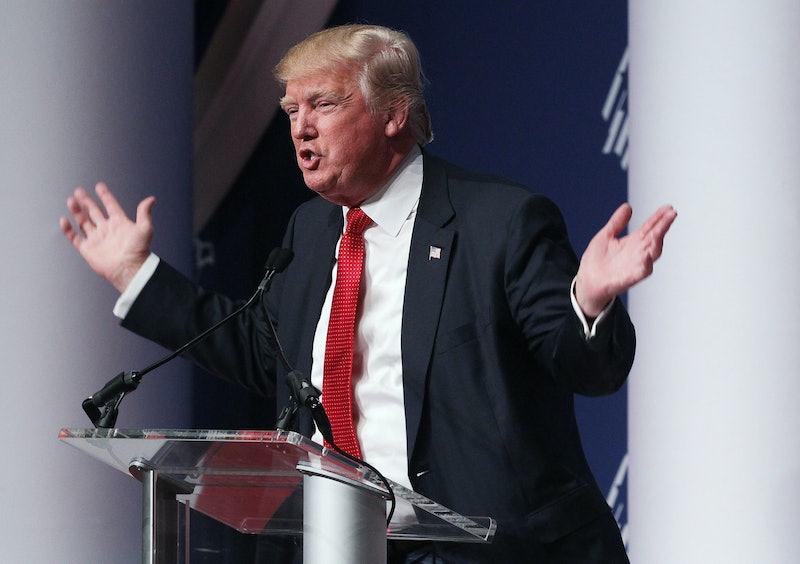 The last time you logged on to MapQuest, you probably had crimped hair and were using Windows 98. But you're going to have to put down Google Maps for five seconds and appreciate the greatest comeback of all time: MapQuest's #AvoidTrump Map. The Donald is sweeping the United States as he campaigns for the 2016 presidential election, spreading comments some find troubling everywhere he goes — but have no fear! Rather than finding yourself surrounded by either the candidate himself or his adoring fans, MapQuest is giving you the tools you need to stay far away from both. The map helps you avoid Donald Trump, no matter where in the country you happen to be.

The map charts the Donald's upcoming appearances in cities from Seattle to Walt Disney World (No! Don't you dare touch Mickey Mouse, you fiend!). For each location, there's a list of suggestions on how to avoid Trump in that particular city. For example, clicking on Phoenix, Arizona, takes you to a page with "Five Ways to Avoid Donald Trump in Phoenix." Activities include hanging out at a local coffee shop, seeing as Trump doesn't drink coffee, tea, or alcohol, or spending the day at the Arizona Latino Arts & Cultural Center.

The #AvoidTrump Map also proposes, "If you can't flee him, be him," and consequently offers an extensive list of golf clubs and top-notch restaurants in cities he'll be visiting. "One thing is for certain: the dude knows how to live large," says the map. While this may be true, I'll probably stick to the aforementioned coffee shop.

If you live in states like Maine, Nebraska, North Dakota, or Montana, you're truly in luck. Trump won't be bringing his reign of terror there any time soon, so you don't even need a list of clever ways to hide from him. For the rest of us, maybe we should all use MapQuest's Parachute travel booking site to get a hotel somewhere in Boise, Idaho.

More like this
The 3 Best Heated Steering Wheel Covers
By Margeaux Baulch Klein
Ashamed Of Your Screen Time Stats? Here's How To Change That
By Alexis Morillo
How To Turn Off TikTok Profile Views So You Can Stalk Other Accounts In Secret
By Alexis Morillo
This Is When Netflix Is Going To Start Charging You For Sharing Passwords
By Darshita Goyal
Get Even More From Bustle — Sign Up For The Newsletter
From hair trends to relationship advice, our daily newsletter has everything you need to sound like a person who’s on TikTok, even if you aren’t.