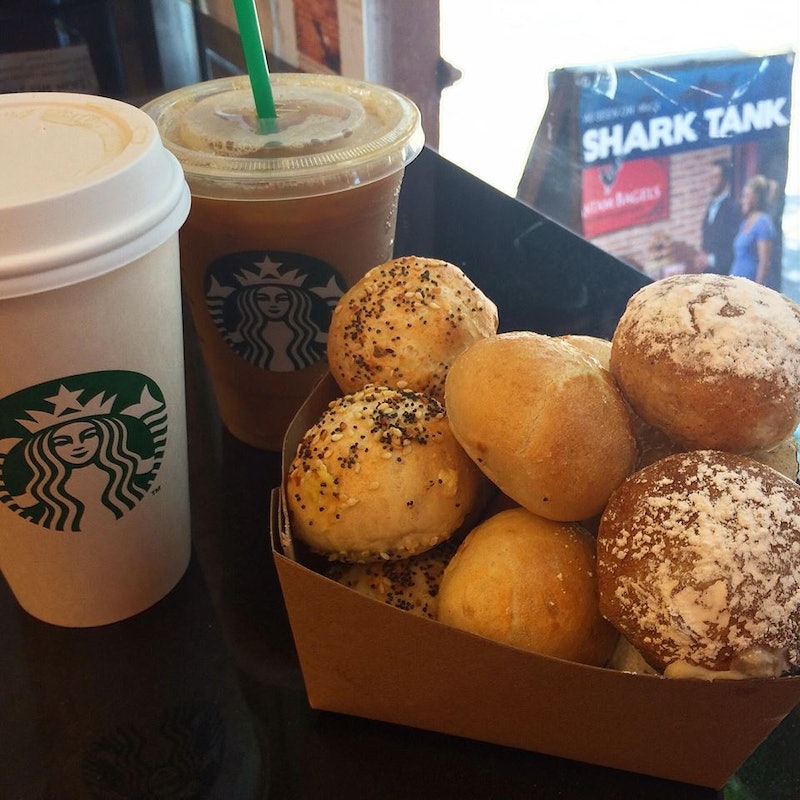 'Tis the season to eat as much as physically possible, and hey, guess what? Your favorite coffee chain is making is even easier for you to reach your carbohydrate-based dreams with the latest addition to their menu: Starbucks bagel balls are a thing now, and yes, they look as magnificent as you think they do.

BuzzFeed christened the new snack the "doughnut holes of bagels," and there's really no better way to describe what's happening here. The palm-sized dough balls are currently sold in three flavors, each featuring its own combination of outer flavor and inner filling. You can pick from French Toast (with maple cream cheese filling), everything (with veggie cream cheese), and classic (with regular cream cheese). How is a gal to choose?

Starbucks has Bantam Bagels to thank for the delicious new idea. Bantam is a New York City-based bagel company that specializes in the miniature morsels. After being featured on reality competition Shark Tank earlier this year, Bantam has seen the demand for their doughy creations skyrocket. Even Oprah declared the bagel balls one of her favorite things in 2014, so you already know they're heavenly. The bagel balls at Starbucks will set you back $1.75 each, or $2.95 for two.

As for how people feel about them? This tweet sums it up nicely:

The bite-sized bits are now available in more than 500 Starbucks locations. The bulk of bagel ball sellers are based in New York City, but you can also get the new treat in Philadelphia and Indianapolis. If you don't happen to live in one of those three cities, never fear. Bantam Bagels' website has an incredibly variety of their signature treat available for mail order. Consider it the ultimate stocking stuffer.

There's no word on whether or not the bagel balls will eventually be going nationwide, alas; we reached out to Starbucks and received no response by press time. We'll be sure to update you with any more information we get, though!

UPDATE: According to a statement provided by Starbucks to Bustle, the bagel balls have been available in New York since the summer. "As part of a larger effort to offer locally relevant products in our stores, we began offering Bantam Bagels in 30 New York stores last June," notes the statement. "Customer response has been positive and we recently expanded to 515 Starbucks locations in New York City, Philadelphia and Indianapolis. We will continue to evaluate customer response as we consider expanding into additional relevant markets." Fingers crossed for the future!