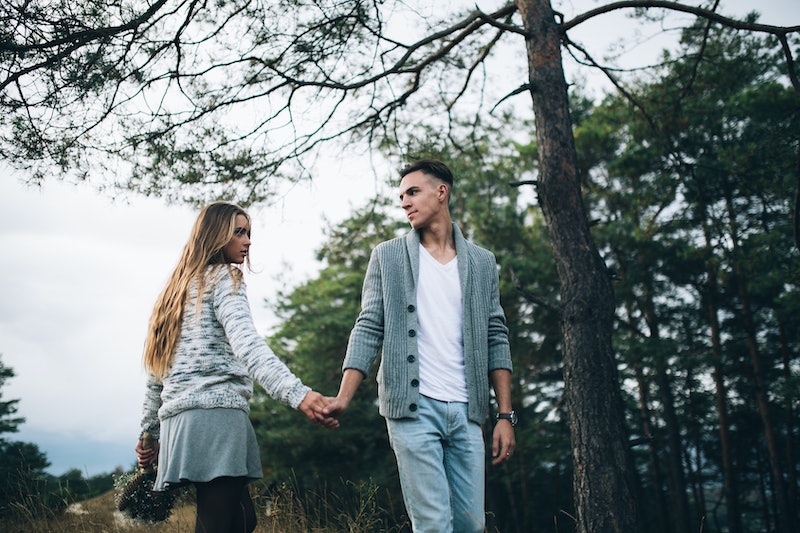 Burning question of the day: Does your name affect your love life? As my Magic 8 Ball used to say, signs point to yes. Tons of studies and surveys have been done over the years on the significance of names, and it turns out that the answer to "What's in a name?" is, in fact, "Quite a bit." But what, exactly, the significance is seems very hard to measure. Honestly, though lots of "scientific studies" have been done in this arena, I feel as though measuring the effect of one's name on one's love life is a lot like trying to measure the effect of one's horoscope on one's dating life: kind of impossible, too many variables, "but it's fun to think about" (shoutout OkCupid and their list of choices re: your standpoint on astrology).

In terms of lists of names that are "most popular" in the online dating realm (which very possibly has joined the ranks of hell's circles by now, ringing in at No. 10), I've never had a chance: Bibi, like Anouk and Victory, will likely never make it to any top 10 (or top 100) lists, merely by virtue of its rarity. It's just the same reason I could never get a keychain or decorative snow globe with my name on it when I was a kid. So, although most of these studies about how your name affects your dating life are imperfect sciences at best, they are still definitely entertaining — and rather fascinating.

1. If Your Name Is On This List, You Have A Better Shot At Online Dating

Is your name Brianna, Erika, Lexi, Brooke, Vanessa, April, Natalie, Jenna, Molly, or Katie? You're in luck, according a survey, "How Hot Is Your Name?" by dating app The Grade, which ranked names in relation to right-swipes.

Though I'm tempted to say that this has nothing to do with the name itself, I did a quick cross-reference with Social Security's website (it's truly not every day that I write that sentence), and found the top 10 girls' names of the '90s (which, somewhat disconcertingly for me, I'd guess is the decade from which most dating app–users hail at this point). They are: Jessica, Ashley, Emily, Sarah, Samantha, Amanda, Brittany, Elizabeth, Taylor, and Megan — in other words, there is zero overlap between The Grade's most covetable and Social Security's most popular (another infrequently typed phrase). Though The Grade doesn't seem to adjust for frequency of names among users or freakish hotness (maybe you're just way more likely to be a fox if your name is Brianna, idk), this is fun to think about.

2. If It's Difficult To Pronounce, It Must Be "Risky"

Is this why women are drawn to men with foreign or difficult-to-pronounce names? (Though the accents and lure of the unfamiliar certainly doesn't hurt). A study published in Psychological Science with the above-mentioned title — no, really, the article was actually called "If It's Difficult to Pronounce, It Must Be Risky" found that "low processing fluency fosters the impression that a stimulus is unfamiliar, which in turn results in perceptions of higher risk, independent of whether the risk is desirable or undesirable."

In other words, if it's hard to pronounce someone's name, the person having difficulty with their enunciation automatically associates risk with the person whose name is tricky to say. That could go in your favor — or not, depending on the way the person who is trying to spit out your name feels about risk in their dating life. Fingers crossed you meet someone with a bad-girl fetish.

Professor Frank McAndrew told SiriusXM's Doctor Radio that the less common your name, the less probable it is that someone on a dating site or app will drop a line. "When dating sites show only name and location (no photo!), those with “less familiar” names get fewer responses from others in their area," he says. Bad news for people like me, I suppose.

Thanks to straight-up egotism, another study, with the amazing title "How Do I Love Thee? Let Me Count the Js: Implicit Egotism and Interpersonal Attraction," found that basically people look for other people with similar names. So if your name starts with "A," you gravitate toward others with names that start with "A." If your name is Jenna, you'll delight in others with names like yours — John, Jana, whatever.

"People should gravitate toward others who resemble them because similar others activate people's positive, automatic associations about themselves," the study hypothesized and confirmed.

5. There Really Are Too Many Variables To Make This An Exact Science, But It's Still Fun To Think About

Yet another study, titled "Spurious? Name Similarity Effects (Implicit Egotism) in Marriage, Job and Moving Decisions" echoes my original sentiment: Though it's tempting to think one's name deeply affects one's chances in life and one's decision-making processes, that just might not be the case. Though this study "successfully replicates" previous studies that found "a disproportionate share of people choose spouses, places to live, and occupations with names similar to their own," it ultimately "shows that they are most likely caused by a combination of cohort, geographic and ethnic confounds, as well as reverse causality."

So names, after all, may have an effect on choices, but it's not as simple as implicit egotism — it's much more complicated. Just like dating in general, I suppose.

More like this
12 Active Date Ideas That'll Get You & Your Boo Outside
By Lexi Inks
50 Valentine’s Day Instagram Captions To Post If You’re Single
By Jessica Booth, Lexi Inks and Carolyn Steber
18 Hinge Prompt Answers To Try If You’re Looking For Something Casual
By Lexi Inks
My Partner Wants Me To Wear A Diaper During Sex. Help!
By Sophia Benoit
Get Even More From Bustle — Sign Up For The Newsletter
From hair trends to relationship advice, our daily newsletter has everything you need to sound like a person who’s on TikTok, even if you aren’t.