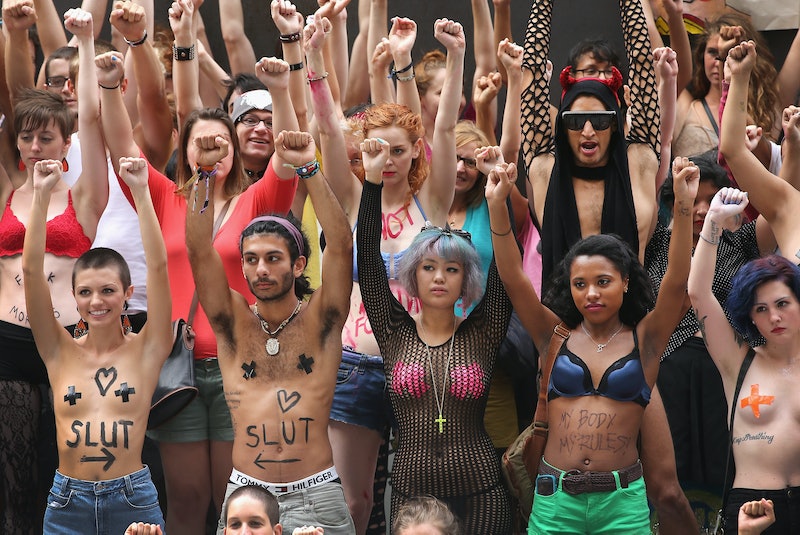 When my doctor asks me how many sexual partners I've had, my general rule is to take the real number, divide it by three, and then subtract five, using the formula .3x-5. I know my doctor won’t call my parents or even give me a judgey face, but I can’t help but feel embarrassed about my relative promiscuity.

Men tend not to have this problem, which is evident in the language we typically use to talk about sex. A man scores a lot; he's a player. A woman sleeps around; she's a slut. Of course, language is fluid. Men can now be called "sluts" (though usually the qualifier "man" is needed.) Women might say they "scored." But I really resent that no one, to my knowledge, has ever referred to me as a player. Here's something I resent even more: I've met men with kill counts over twenty who would only marry a woman who’s slept with fewer than five people.

While I experience a rage blackout, let's see what science has to say about this.

It is now estimated that the average number of men a woman has slept with is eight, while men reported an average of twelve. A University of Texas Austin study published in October of 2013 in the Archives of Sexual Behaviors may help us understand this disparity and answer the question: "Why are women having less sex?" Researchers found that men and women have entirely different regrets about their sexual histories. While the most common regrets for women were losing their virginity to the wrong partner, cheating, or moving too fast sexually, men regretted not being sexually adventurous enough when they were younger or when they were single.

We can conclude from this study (and many others preceding it) that women are generally more concerned with keeping their "numbers" low, as the possibility of regret is higher. We can also conclude this anecdotally; many women pause before going home with someone to ask themselves: “Is this man worth raising my number?”

The findings of this study reignite an age-old debate: is our sexual psychology hard-wired by evolution, or shaped by social convention? Is evolution to blame for women feeling like sluts when they sleep around, or is society to blame because society calls them sluts?

The researches of this study posit that women regret casual sex primarily because they face higher repercussions, like pregnancy and emotional attachment. This all plays into the standard evolutionary narrative: men produce loads of sperm at a fairly low cost, which drives them to gallivant about, bang chicks, and spread their seed with minimal consequences. For women, however, reproduction is costly and high stakes; there is always the possibility of conception, of growing a human inside you for nine months, of pickle cravings, and the potential ripping of your vagina.

So if men are driven by the need to spread their seed and women are driven by the need to conserve their wombs until they find a worthy partner for fatherhood, then how come women are able to have sex for reasons other than conception? Why are human females, unlike most of our primate relatives, always “sexually receptive?” That is, why are women physically able to have sex at any given time, not just when they’re ovulating and trying to reproduce? Riddle me that, evolution.

Sex at Dawn , a game-changing book published in 2010 on the evolutionary psychology of sex, stresses the unique position of human women, who do not outwardly show when they are fertile (our vaginas do not become five times their size before sexual activity). “Concealed ovulation,” as it’s called, indicates that women evolved the capacity to have sex for reasons other than reproduction: because it's fun, or because it feels good.

Yet the narrative remains that females value quality — as in, future baby daddy material — over quantity — as in, dudes at bars. Sex at Dawn cites a passage written by evolutionary psychologist David Buss. “Women in the past who failed to exercise acumen before consenting to sex were left in the evolutionary dust; our ancestral mothers used emotional wisdom to screen out losers.”

Well first I’d like to challenge the notion that losers have been screened out of the gene pool by evolution. Visit any fratty East Village bar and you will find proof that this is false. Second, I’m still waiting for proof that there’s a genetic basis for a man’s “preoccupation with paternity,” a trait that women supposedly consider when weighing whether or not to have sex with someone. Of course, LGBT experiences are entirely ignored.

Let’s fast-forward a few million years to the present. As we continue using evolution to prop up findings of female adverseness to promiscuity, it’s important to recognize that social convention informs how women feel about their sexual experiences. It takes one dumb comment in the cafeteria — or one dumb movie premise (see Anna Farris’ What’s Your Number), one Taylor Swift song, one Miley Cyrus "scandal" — to influence how a girl feels about her sexual identity, her sexual past. Now imagine the power of all of these forces in conjunction, plus Rush Limbaugh. Oh, and threats to birth control access.

Attitudes seem to be changing, however slowly. This past November, The Independent reported that women are starting to have sex earlier and are racking up more sexual partners over their lifetime than a generation ago. Perhaps this means the uneven attitudes about sex are evolving. Regardless, I know I’ll continue to keep my kill count private, while many of my male brethren revel in their conquests. I’m sticking to my formula: .3x-5.