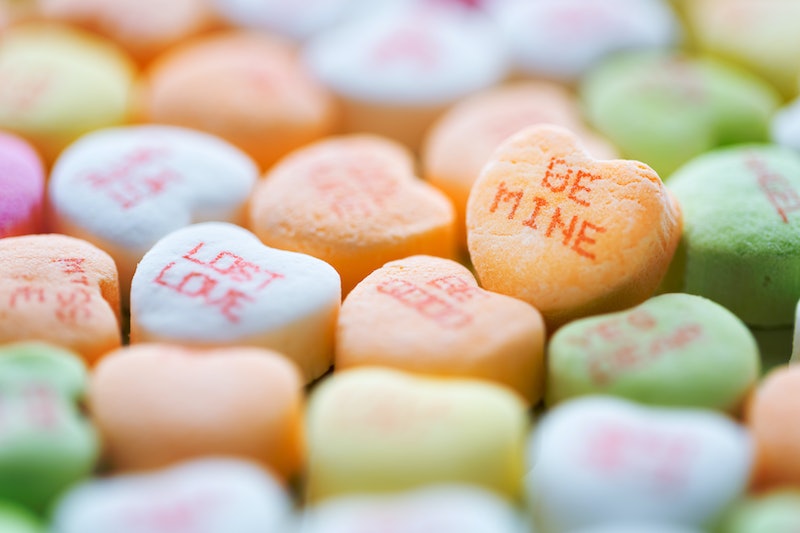 Their answers were forthright, surprising, hilarious, and moving. This isn't a holiday I've ever bought into, but hearing and reading the incredibly intelligent, funny, and articulate responses I received from the women in my life is making me rethink that.

If I had to boil down all of these responses into an idea, it would be this: on this day (of all days) let's all take a second and appreciate what we've got. Then, let's think critically about the ways we can better mothers, friends, daughters, lovers, sisters, girlfriends, women, and members of this planet. Valentine's Day is, fundamentally, about selling cards and chocolate. But that doesn't mean it can't be a reminder for all of us to treat those we love (and ourselves) as excellently as they should be treated.

1. A perennial AmeriCorps member who has a perennial on-again, off-again boyfriend

2. A native San Franciscan living on the East Coast

"My mom sucks at sending cute stuff, so I'd like a little care package from her from 3,000 miles away. It's hard to live so far from home sometimes. Also, a great dinner out at a restaurant filled with couples, but with my three or four best girlfriends. Not only for the great times and the food, but to show everyone in the restaurant 'hos over bros', always."

3. A West Wing junkie and one half of a fairly serious couple

"I want to spend Valentine's Day watching the new season of House of Cards. I haven't told my boyfriend yet."

4. The chillest of YOPROs, circa sophomore year of college

"A boy going to CVS and buying my conditioner, my face wash, a tooth brush, and then stealing his roommate's extra phone charger so that I could sleep at his place without having to bring my shit."

"A night off so a date doesn't devolve into splitting a cab home from work after midnight."

6. A member of the Bay Area tech community

"I just want everyone to stop hating on Valentine's Day for silly reasons and take the opportunity to think about someone or something they love. In my case it's my dog and the homeless guy on Polk [Street] who calls me sweetheart. I will be spending V-Day with him."

7. A woman in the midst of job application hell

"Big arms. That are attached to someone, obviously. Biceps for days, please!"

"I want my best female friends to buy me drinks for Valentine's Day so that the lonely old men at the bar will also feel comfortable buying me drinks, and then everyone will feel less lonely for a minute. Or, y'know, my mom could send me chocolates."

9. A Canadian just trying to get back to the States

"I would like someone to marry me — not for love, but for a visa."

10. An outreach coordinator at a nonprofit

"For Valentine's Day I want people to realize that love can be expressed (and not commercialized/purchased) the other 364 days a year, too. I want a sense of power and positivity, from V-Day or One Billion Rising or just some day-to-day conversations, that we can end gender, sex, and sexuality-based violence. Honestly, I want the usual: good intention, great sex, and a better tomorrow."

11. A woman working to educate teenagers on sexual health and responsibility

"On a cheesy note: seeing the people I love happy, loved, content, and for once not worried by the FOMO bullshit of our generation. On a curmudgeonly note: NO couples exhibiting excessive PDA on a packed train at 7:30 a.m. (can I get an amen?). On a selfish one: I'd really enjoy receiving a blow job."

"For everyone to stop freaking out about it. Also, chocolate."

"I want all the boys I am attracted to to dump their girlfriends and take me on a hike. Actually, I want to be attracted to someone who doesn't have a girlfriend."

14. A community organizer in Boston

15. A hopeless romantic who (really) is gonna marry her current boyfriend

"Fuck chocolate. I want sex. And lots of it."

More like this
How To Politely Reject Someone Who Keeps Asking You Out
By Laken Howard and Lexi Inks
8 Completely Unserious Tips To Make Your Cuffing Season A Success
By Ginny Hogan
10 Ways To Be More Empathetic To Your Partner
By Raven Ishak and Lexi Inks
Think Your Partner Is Cheating? These Tarot Cards May Confirm Your Suspicions
By Kristine Fellizar
Get Even More From Bustle — Sign Up For The Newsletter