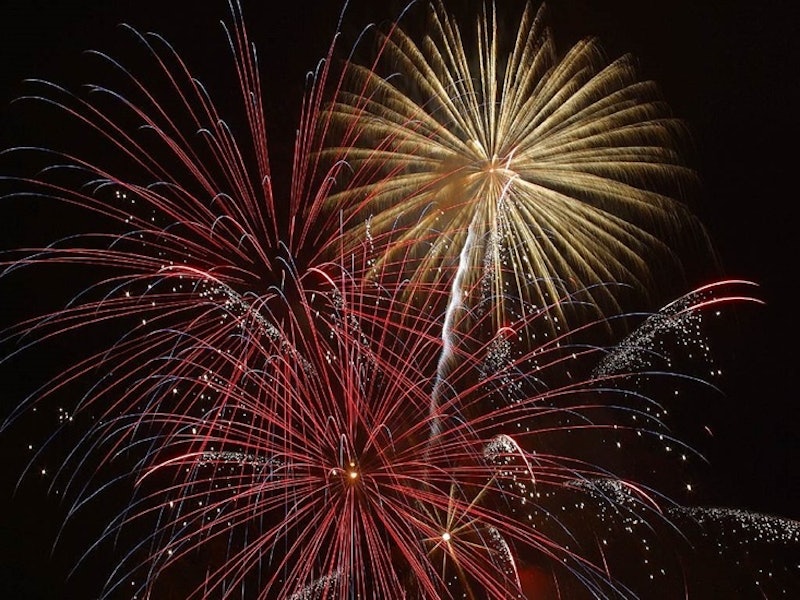 Wow — how scary is it to think that 2015 is approaching the finish line? Fortunately, though, any existential crises about the nature of time are always subdued by the awesomeness of New Year's Eve: The night where the world stays up late, drinks champagne, and welcomes the next 365 days with open arms. So, where is the best place to celebrate New Year's Eve? It might not be what you're thinking. Although from what see on TV from Ryan Seacrest and company each year, New York City is the best party in the world on Dec. 31 — but financial planning site WalletHub has done a little digging, and they've calculated where the best places to ring in the new year truly are.

WalletHub analyzed the 100 largest U.S. cities and calculated the results based on three categories: Entertainment and Food, Cost, Safety and Accessibility. Mix those all together and you have a certified list of the ultimate New Year's Eve party spots. Also on display in WalletHub's report are several other measures that might make or break a New Year's celebration, depending on your priorities: For example, Portland, Oregon, has the most nightlife options per capita, while Hialeah, Florida, has the least. Other categories include hotel prices, and cost of a glass of wine (important!).

Below, take a look at the top 10 best cities for maximum New Year's Eve satisfaction. They might not be the cities you had in mind, but we can guarantee they are where you want to be.

As if being on a beautiful island wasn't already enough, apparently Honolulu is a killer New Year's Eve locale. Many of Hawaii's best parties occur at sea, giving party-goers beautiful views of the fireworks. Oh, and the anticipated forecast for Dec. 31 is 82 degrees. Name one thing about all of this that doesn't sound incredible.

This is one of the more obvious selections on the list, as Vegas is already known as a partying mecca, no matter what day of the year it is. In particular, Fremont Street is known for its thrilling New Year's Eve party. Admission is only $30 — not too shabby!

Fun fact: Cincinnati's Eventbrite page yields over 170 unique events for the night of Dec. 31. Personally, I think the Night At The Museum looks fabulous.

One of the best things about New Year's Eve is sitting down for a delicious meal with friends and family. Portland is known for its unique culinary landscape, so you'll certainly have no trouble finding the perfect place to feast. After your dinner, Portland's Champagne Ball is a semi-formal charity event that looks like exactly where you'd want to be.

Though it may be mighty cold in Minnesota, the city definitely knows how to throw a blow-out party. The city has an entire website dedicated to various New Year's events, none of which fall short of spectacular. The Space Party is an intergalactic themed romp where "everyone is a VIP." Boom.

If you're looking for a good time in Arizona, Scottsdale's W Hotel looks like one of the most beautiful parties in town. Tickets are $100 for men and $75 for women (although admittedly I'm not sure why the prices are different...), so this party certainly won't be for the faint of heart.

As with any other city, San Diego has its fair share of extravagant New Year's events. But what sounds more beautiful than having a bonfire on the beach with friends and toasting to 2016 under the stars?

Atlanta certainly does not hold back when it comes to bringing Southern hospitality out in full force for New Year's Eve. One of the city's biggest events, the Peach Drop, featured Sugar Ray, Ludacris, and an 800-pound peach last year. The fate of this year's Peach Drop is currently up in the air — and one can only hope the peach will drop into 2016.

Of course San Francisco has the perfect combination of big club parties and off-the-beaten-path bashes. For a more alternative New Year's Eve, check out The Big One, which will feature The Flaming Lips, Ratatat, and Tycho, among others.

Orlando? Why would Orlando be the best place to... ah, right! Disney World, of course! Can you imagine how incredible it would be to watch fireworks above Cinderella's Castle? Or share a toast at Downtown Disney? There's a wide variety of holiday packages available, and all of them sound flat-out incredible.

This map gives you a good idea of where to get the party started on New Year's Eve this year; check out WalletHub's full report for more.

More like this
A Guide To All Of Zach Shallcross' 'Bachelor' Filming Locations
By Brad Witter
12 Aphrodisiac Desserts To Spice Up Your Valentine’s Day
By Kaitlyn Wylde
15 Black-Owned Liquor & Wine Brands To Add To Your Bar Cart
By Alexis Morillo
16 Trader Joe's Appetizers That Are Total Party-Pleasers
By Kaitlyn Wylde
Get Even More From Bustle — Sign Up For The Newsletter
From hair trends to relationship advice, our daily newsletter has everything you need to sound like a person who’s on TikTok, even if you aren’t.