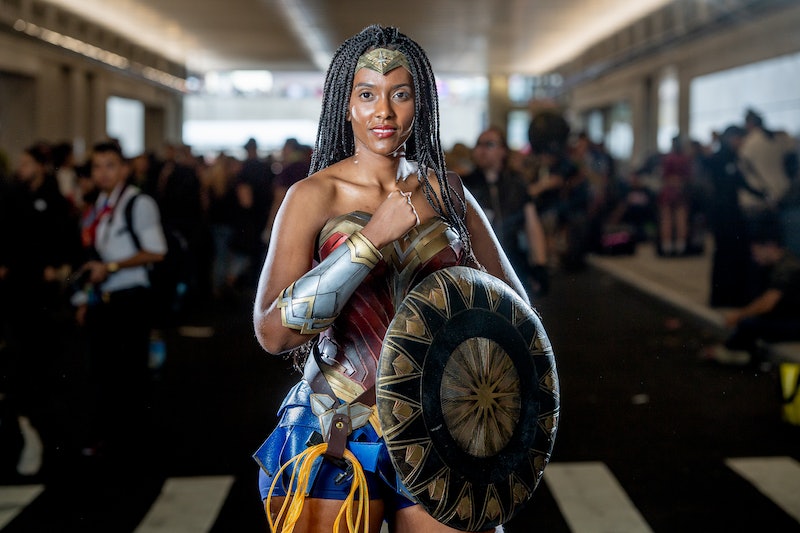 It's no secret that women's bodies are frequently depicted in unrealistic ways, manipulated through the use of Photoshop in everything ranging from fashion to music to film. The same is true in comic books, even though Photoshop isn't typically involved: Women are almost always drawn in "sexy" poses, rather than strong ones — and what's more, they're usually either difficult or impossible poses to hold in real life. But maybe there's not as much of a difference between these illustrated images and the Photoshopped ones we see in magazines and advertisements — because when BuzzFeed had real women recreate superhero poses, then altered their bodies to replicate the comic book illustrations, the end effect is pretty much the same as it is when a photograph is manipulated to create an advertisement.

Recently women have been achieving better representation in the comics world, both in general and in terms of inclusivity (Faith, for instance, who is all kinds of awesome). But unfortunately these examples are still the exception rather than the rule. Black Widow still doesn't have her own movie, the "Mary Jane Pose" has reached meme-level heights, and I still can't get over the fact that this was initially deemed an acceptable cover for Spider-Woman #1. Yikes.

And the women over at BuzzFeed proved just how absurd and sexist these portrayals actually are. The photo series features six different women attempting to recreate specific comic book heroes like Wonder Woman and Storm. Not only were the added-on Photoshop manipulations ridiculous, but the poses themselves look seriously unbearable — and, in fact, we know they're unbearable, because BuzzFeed also created a video to document the photo shoot experience even before the images were run through Photoshop.

Before the shoot, the women all though, "How bad could it be?" Later, though? As the woman posing as Storm put it while breaking out laughing, "I might have lied about this being easy."

Most of the women laughed at the ridiculousness of trying to contort themselves into these physically impossible poses — but even though it's funny, they also have a point. Why would anyone attempting to capture a bad guy also be so concerned about sticking their butt out just so? Again, the point isn't the sexiness — everyone can and should feel as sexy as they like all the time. But when sexiness is the only option — and when it's chosen over strength, which would undoubtedly be more useful for foiling villains — that's when it becomes a problem.

After the photo shoot was over and the women got to see the un-retouched pictures of themselves, reactions were mixed. Some were pleased with the "fierceness" of the pics, but the general consensus was less enthusiastic. Several of the women commented on how the poses made them feel bad about themselves and caused them to pick apart aspects of their appearance.

"I know these [portrayals] aren't realistic," says one woman. "But I do think that people who read these all the time probably absorb a lot of how they should perceive women's bodies... even if they don't know that they're doing it." This is where the real truth of the matter lies. Yes, these comic book women are an illustrated fantasy — but at what point does the fantasy become so ingrained in our mind that we start to hold it as truth?

Hop on over to BuzzFeed to see the fully re-touched images, and check out the full video of the photo shoot below:

More like this
25 Inspiring Quotes From Black Women To Celebrate Black History Month
By Kyli Rodriguez-Cayro and JR Thorpe
Twitter Is Identifying With Sally Field & Jane Fonda’s Friendship In New Viral Video
By Jake Viswanath
24 History-Making Black Women You Probably Didn't Learn About In School
By Ayana Lage and JR Thorpe
Phoebe Dynevor Serves ‘Bridgerton’ Underboob In Stunning Floral Gown
By El Hunt
Get Even More From Bustle — Sign Up For The Newsletter
From hair trends to relationship advice, our daily newsletter has everything you need to sound like a person who’s on TikTok, even if you aren’t.