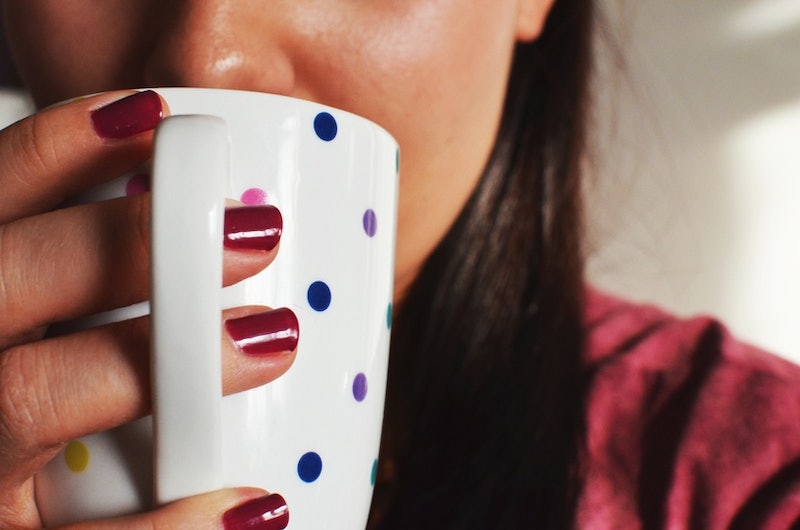 It's going on four o'clock in the afternoon and I'm reaching for my third coffee of the day. It's a pretty consistent cycle: There's the 8 a.m. wake-up cup, the noontime brew, and then the mid-afternoon pick me up. But what if just one cup could get the job done? That's the idea behind Nestle's new slow-releasing coffee. Researchers at the swanky-sounding École Polytechnique Fédérale de Lausanne and University ETH Zurich have collaborated with the Nestle Research Centre in Lausanne, Switzerland to craft a brew that will keep you going from morning to night. Good idea, or best idea? You be the judge.

The science behind the idea involves something called "cubosomes." Despite sounding like a Pokemon, cubosomes are actually "made of lipid molecules and water" and "mimic natural structures present in the body," according to a press release. Researchers are still playing around with their structures and properties, but the real power of cubosomes is in their ability to release things into the body at a controlled rate.

That's where the coffee comes in. Cubosomes have a variety of potential uses due to their timed-release capabilities. Researchers at Nestle think these li'l molecules could bring immense benefits for both the pharmaceutical and food industries in the forms of medicine and supplements. But of course one must ask: what will this new research do for coffee?

I personally love drinking coffee throughout the day. Having a fresh, cozy cup is something I always look forward to. But not all of us have watched enough Gilmore Girls to feel the same way; often, consuming excess amounts of coffee can bring on super-uncomfortable jitters, headaches, and anxiousness. Some people shy away from the beverage altogether despite the decidedly positive effects of a caffeine boost. But the slow-release coffee will provide the energy without the undesirable potential side effects.

The actual slow-release coffee has yet to hit shelves, but you can bet that once it does, we will all be very happily caffeinated all day long. I hope the baristas at my local Starbucks will still remember me when I start going in there only once a day.

More like this
An Expert Weighs In On The Viral Raw Carrot Salad Trend
By Alexis Morillo
Do Green Powders Work As Well As TikTok Says They Do?
By Carolyn Steber
15 Black-Owned Liquor & Wine Brands To Add To Your Bar Cart
By Alexis Morillo
12 Aphrodisiac Desserts To Spice Up Your Valentine’s Day
By Kaitlyn Wylde
Get Even More From Bustle — Sign Up For The Newsletter
From hair trends to relationship advice, our daily newsletter has everything you need to sound like a person who’s on TikTok, even if you aren’t.