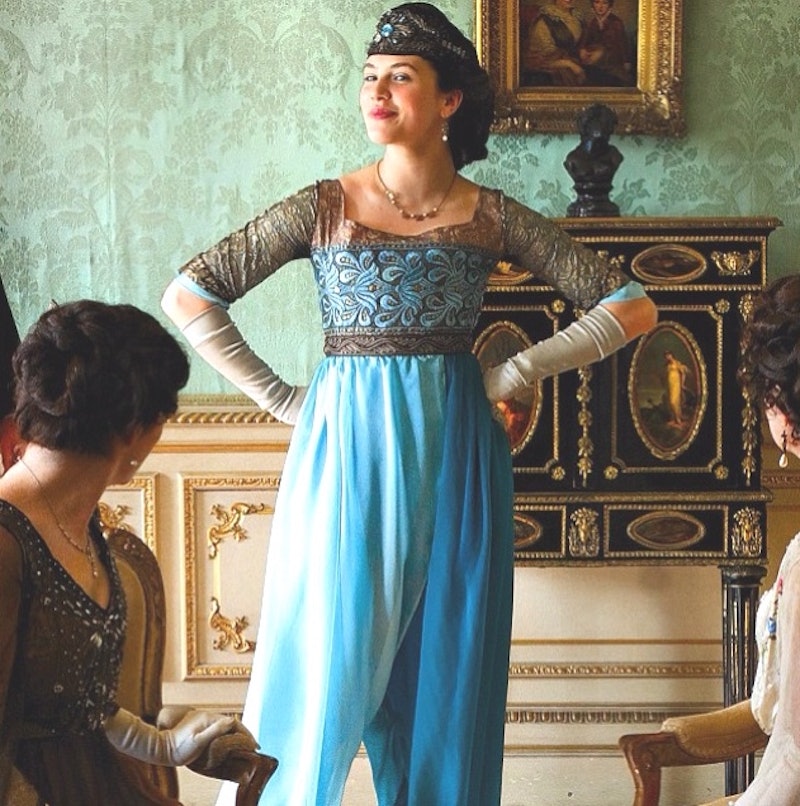 At some point during the past generation’s revival of retro fashion, “vintage," in the popular imagination, has come to mean “petticoats and victory rolls.” As a bona fide Vintage Girl myself, I’m not exactly complaining. I love a good full skirt, a kitschy novelty print, and a set of starched pleats, and I'm thankful that my preferred styles reside in the collective conscious. Minimal hunting is often necessary if I want to get my hands on these types of items, after all.

I do bridle, however, at one consequence of the alleged vintage comeback. Our current understanding of “vintage” has seemingly eclipsed the diversity of styles that actually existed in the decades of yesteryear. Search “vintage dress” on eBay, for instance, and you’ll find a cache of reproduction ‘50s dresses, but nary a genuine article. Let alone a genuine article from a decade outside of the '50s.

If that’s frustrating for me, someone who lives and breathes midcentury style, it must be doubly so for someone who's bored by contemporary fashion but doesn't care for the pinup look. All that said, I’ve done some digging into the many vintage looks missing from our sartorial repertoires. Here are seven vintage trends that your favorite "retro-inspired" e-retailer probably won’t tell you about.

A common fashion myth holds that sartorial adventures started in the ‘60s, and that Western style was mired in primness until the youth-quake arrived to set it free. That's simply not so. Probe the early aughts of the 20th century a little, and you’ll find a very different picture than the leg-o’-mutton stereotype might suggest.

Many European and American women donned romantic styles inspired by Renaissance art and the burgeoning Ballets Russes. The boldest among them sported turbans and draped silks in tribute to Scheherazade. In truth, the fandom was out in full force.

Any flapper queen likely knows that the beauty ideal of the Roaring '20s was slim, straight, and lithe to a fault. Few understand, however, precisely the lengths that these ladies went.

It’s fascinating to me that a practice so wholly wedded to masculinity today — chest binding among trans men and drag kings, for instance — was once the peak of the feminine ideal.

Snobs everywhere bemoan today’s persistent under-dressing, and it amuses me every time. You’ve heard it before, I'm sure: "How can someone wear pajamas in public?” Someone needs a vacation to the ‘30s, stat, when pajamas in public were the order of the day.

Pants for women were still a novelty back then, and many stylish girls tumbled headfirst into the trend. First worn by only the most affluent, silken pajamas quickly spread among the middle and lower classes, finally inspiring the palazzo pant some 30 years later.

So next time you find yourself prowling your favorite department store in flannels at 11 a.m., remember your glamorous predecessors and walk a little taller.

In the 1930s, Salvador Dalí and company washed the world in color, and the once-strict bounds of art and fashion began to blur. Highest couture sparkled with the sublime, the fantastic, and, of course, the surreal.

Designer Elsa Schiaparelli ushered in the gothic absurdities we might see today at Hot Topic or at a Halloween ball. She’s particularly famous for her "skeleton" dress, but her brassiere adorned with a pair of (fake) human hands remains my personal favorite.

Other designers, most prominently Sonia Delaunay, worked with cubist themes and the attendant garish brights. Women of the '30s, it seemed, wanted a little whimsy, and clothiers responded in a bountiful manner.

The Dior day dress — full-busted, full-skirted, forever feminine — has become emblematic of both the 1950s and the concept of vintage itself. Polaroids don’t lie: Many women of the day indeed enjoyed a nipped waist and blooming petticoat.

History, however, tells a fuller truth. Fashion is ever-cyclical. Many a late ’50s woman, courtesy of designer Cristobal Balenciaga, found herself in bust-flattening coats and dresses reminiscent of the roaring ‘20s. Though it was formally dubbed a "chemise," modern parlance has offered less flattering terminology: The "sack dress."

The trend proved a striking, if ungainly, equidistance from ‘50s curves and the long, leggy ‘60s. Ellen Melinkoff, author of What We Wore: An Offbeat Social History Of Women's Clothing, 1950 To 1980, quoted a wearer of the garment in her book:

I believe the chemise dress was one of the ugliest style[s] foisted upon American women by designers. The dress disregarded the bust line and the waist, dropping straight down until it fit tightly over the buttocks. My chemise was yellow, and I looked like a waddling stick of butter.

6. The Hostess Dress & The Overskirt

Many vintage mavens often credit Lucille Ball with popularizing the hostess dress: A sweeping gown often slit up the skirt to reveal a pair of pedal-pushers, worn for at-home entertaining. The style receded in the 1960s as pantsuits took the stage. Layered skirts, however, resurfaced in the ‘70s, albeit in tweedier, more bohemian form.

Annie Hall was fashion’s latest darling of the era, and it showed. In Fashion: A Visual History From Regency & Romance To Retro & Revolution , NJ Stevenson described the look as such:

A double skirt, with the split overskirt in large contrasting plaid, gave just the right amount of rusticity to urban fashions plus a nod to “le style anglais” — the peculiar Parisian interpretation of the English country look.

Recycled fashion, strange as it may seem, lived on the margins until the 1970s. A century ago, stylish women wore what the swanky elite bade, and “personal style,” as we conceptualize it today was downright alien.

It wasn’t until the ‘70s that individuality arguably started ascending and bohemian girls began raiding their grandmas’ closets, seeking styles that the fickle years had lost. Over the subsequent decades, secondhand clothes slowly lost their shabby connotations and developed a quirky mien.

Today, women (and folks of any gender) can enjoy all that history has to offer. We can rock ‘30s lines or indulge in ‘50s frills with nary a critical glance, and for that I’m very grateful. Our foremothers weren’t quite so lucky, after all.

To don ‘40s curls in the swinging ‘60s would have seemed unbearably outdated, even crass. Even if not all vintage styles have made a comeback, we're living in the golden age of sartorial influence, and I hope each and every one of us makes the most of it.

More like this
These Are The Best Socks A Woman Can Buy
By Lisa Fogarty
The Body Shop’s New Range Has More Antioxidants Than Retinol
By Justine Knight
The Velvet Nail Trend Brings Cozy Texture To Your Manis
By Jordan Murray
15 Chrome Nail Polish Colors For An Easy, Mirror-Like Manicure
By Audrey Noble
Get Even More From Bustle — Sign Up For The Newsletter