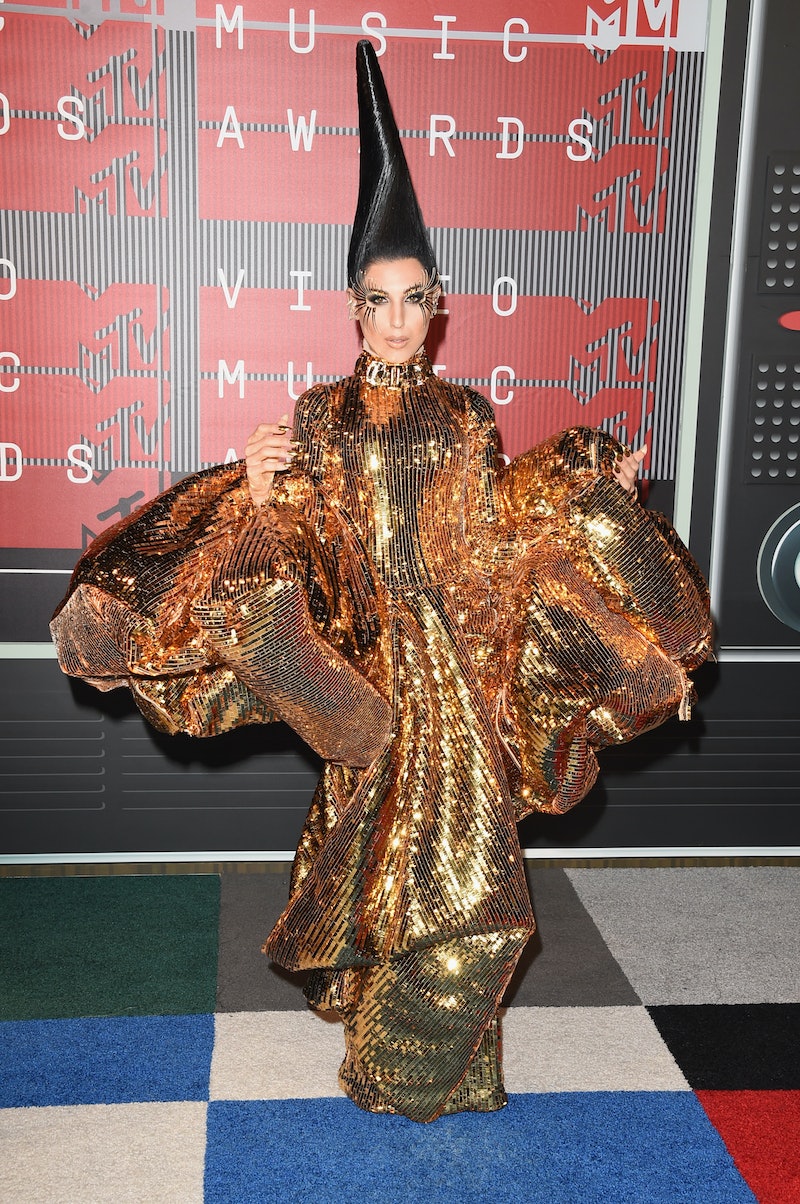 There is something about a red carpet that just brings out the bold, beautiful, and brave in those who walk it; and the carpets of 2015, with their myriad of bizarre red carpet looks, were no exception. The award shows, premieres, and galas of the last 12 months brought a bevy of fierce sartorial moments, but they also gifted us some of the best and weirdest looks to date. Subtlety was simply not the name of the game for the stars who were seemingly out to prove that OTT was the new black.

While the bright lights of Hollywood certainly saw some off-beat style moments, creativity was king for a multitude of stars in 2015. In review, it is quite clear that some of the most outrageous high fashion ensembles came down the carpets of the MTV Video Music Awards, American Music Awards, Grammy Awards, and Billboard Music Awards. Combine those musically-inclined individuals with one of the strangest Met Gala parades of fashion in recent years, and the celebrities of the world brought the bizarre to us in full force.

Fashion is nothing if not subjective, and I am a full supporter of rocking whatever threads bring out self confidence and personality. But even with a “you do you” filter, there were a handful of statement-making ensembles that won’t soon be forgotten. I bring you the top 10 most bizarre, boundary-pushing red carpet looks of 2015.

Harry, we love you and that will never change. But the full floral flares you sported to November's American Music Awards were a bit much. Sure, you pulled them off because the world basically can’t see past your flowing locks and charming British demeanor, but that doesn’t make them any less of a bizarre, Mick Jagger-esque choice. It was by no means the most outrageous ensemble of the year, but the number of memes it instantly spurred wins him a spot on the list.

Following up his bare-chested, bright yellow, smiley-face adorned Video Music Awards outfit from 2014, Jeremy Scott went sans shirt to the awards show yet again this August in a suit of candy-colored stripes. The world basically always expects the eccentric designer to show up in duds only he could dream up, but the bare chest/bright color combo reached bizarre new heights.

The queen of ska can pull off almost anything, but what even is this outfit? After staring at her ensemble from November's American Music Awards for upwards of 10 minutes, I still cannot decipher what it is. A dress? Is there a bodysuit somewhere in there? I am almost sure those aren’t pants, but I wouldn't be placing any bets. The whole thing reads very risqué funeral to me, which are two words that feel super weird when paired together. Major props for looking that fierce in all-over sheer fabric, though.

Madonna has proven over the years that the rules simply don't apply to her, but the matador style mini dress she wore to the Grammy Awards in February was a bit much, even for her. While she undoubtedly still looks like a badass in an over-the-knee, black leather boot, the rest of the outfit was less OTT when she sported it in her "Living For Love" music video than it was IRL.

Solange Knowles' Met Gala dress from May was sci-fi in every sense of the term. Just like unknown planets and life forms, it is mysterious, inexplicable, a little scary, and may possibly come to life and take over at any moment. Knowles is usually a style queen, though, so let's just chalk it up to the fact that sometimes fashion is art (and only art).

In the category of "random things people look like," Joy Villa basically wore snow fencing to the Grammys back in February. Her dress, seemingly made completely out of the orange plastic used to block large amount of precipitation during blustery winter storms, took the cut-out trend to a whole other level. Also, how did she even sit down?

Obviously, everything Miley wore during her hosting gig at August's MTV Video Music Awards was outrageous, but the peek-a-boo in the front, booty-baring in the back chandelier she sported on the red carpet was the pièce de résistance of the evening.

If it was a statement Dencia was looking for, she found it at May's Billboard Awards with this fully neon studded jumpsuit. Once your eyes stop spasming, you can even see that the stones actually make a face, with the eyes expertly placed over her lady lumps. And in case that wasn't enough to take the outrageous red carpet cake, the one-piece was topped off with mismatched glitter platforms and glasses that give a Daft Punk vibe.

From the highest of cone-shaped hair to the winged-out, gilded eyes to the metallic sequin dress with sleeves large enough to hold all of Miley Cyrus' outfit changes, Z LaLa brought mod madness to the MTV Video Music Awards red carpet back in August. Lady Gaga would've been proud. How did she even move in that excessive amount blinged out fabric? And could she blink? Did she fit through the door without ducking? So many questions I never thought I would have about an awards show ensemble.

Z LaLa for the win, ladies and gentlemen. The multi-lingual singer wore an octopus to the American Music Awards in November of this year. Cue the bizarre red carpet outfit mic drop. Any remotely off-beat thing that was worn on any red carpet this year pales in comparative weirdness to an under the sea, iridescent creature with a corresponding water plant headpiece and blue ombre talons.

Just like the world would be a boring place if we were all the same, the red carpet would be less exciting if everyone walked in a LBD. Props to these celebrities for being brave enough to bring the bizarre to the party in 2015.

Want tips for how to work OTT fashion into your wardrobe? Check out the video below, and be sure to subscribe to Bustle’s YouTube page for more styling tricks!

More like this
Lizzo Wore A Spicy Bustier Gown On The 2023 Grammys Red Carpet
By Alyssa Lapid
Harry Styles Brought Nipples & Sequins To The Grammys
By El Hunt
Taylor Swift’s Glitzy Grammys Look Is Giving Midnights
By Alyssa Lapid
Camila Cabello Wore A Pearl Bra On The 2023 Grammys Red Carpet
By Alyssa Lapid
Get Even More From Bustle — Sign Up For The Newsletter
From hair trends to relationship advice, our daily newsletter has everything you need to sound like a person who’s on TikTok, even if you aren’t.