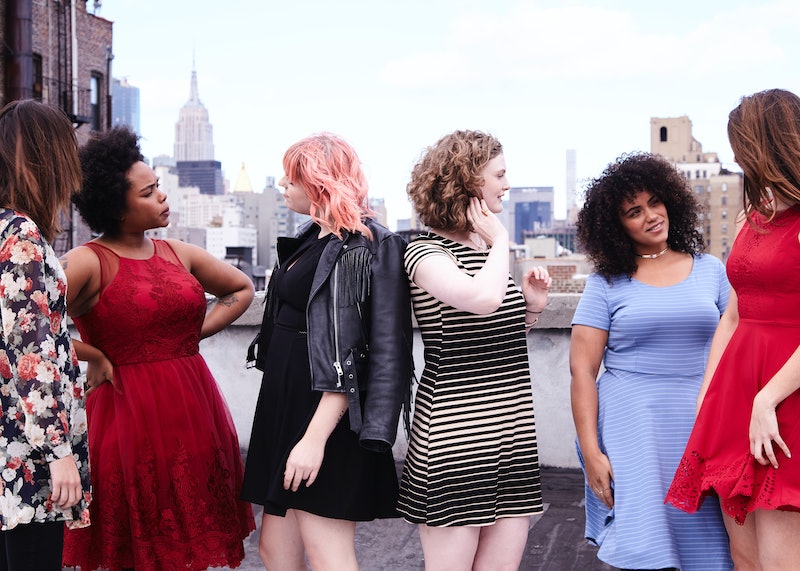 I moved to Charlotte from Syracuse, NY about four months ago, mostly because I was craving adventure and a change of scenery. It was the first time in my life that I'd ever moved away from home — I grew up in Syracuse, went to college there, and took my first job there. I know all of the roads and restaurants. I know about that massive pothole that comes out of nowhere on the highway and will blow your tire out. And I know who my friends are there, people I've known for years and years. The city of Syracuse is essentially like my favorite pair of sweatpants — it's just so comfortable. But suddenly I was hundreds of miles away in a place where I knew one person. I knew that hours spent bingeing on Netflix would quickly lose its charm and I would eventually need some human interaction, preferably in the form of female friendships. Thus began my adventures in the world of friend dating.

What is a friend date, you ask? It's when two ladies who don't know each other well (or at all) get together in the hopes of becoming buddies. I've done friend coffee dates, friend frozen yogurt dates, friend dinner dates, friend pedicure dates. It's almost exactly like a romantic date, minus the whole end-of-the-night kiss thing.

When you friend date, you're focusing heavily on developing new relationships. You're making sure that the great conversation you had at that one awkward networking event turns into a solid connection instead of just a cordial greeting when you run into each other at yoga. After going on friend dates with at least six different ladies, I've realized a few truths about the whole process.

1. You have to share a little bit to build a real friendship

When you first get together, it's OK to keep things superficial with generic talk about the mutual friend who introduced you or the event where the two of you met, where you live, where you're from, what you do for work, etc. But as you hang out more, you'll want to take that leap and confide in each other. No need to reveal every personal secret and insecurity, but you do want to show that you're more comfortable with her than, say, the barista you see every day who still thinks your name is Cassie.

Initial friend dates can have uncomfortable moments, particularly if the date is a blind one. You don't need to pretend that everything is cool and comfortable when really your brain is struggling to process the fact that you're trying to forge a new friendship with a total stranger. If you feel like you're in one of those Match.com "real first date" ads, make a joke about it. She's probably feeling a little awkward too, and the quip can break the ice.

3. You have to follow up and keep it going

A potential friendship can fall by the wayside if you go weeks without seeing each other. You may have had a great time together, but if too much time passes, you'll drift apart and the friendship will fizzle, just like in a romantic relationship. Make follow-up plans soon after the initial meeting. Don't just say "Let's hang out again soon!" If you see something that she'll find funny, text her about it. If there's an event you want to go to, ask if she'd like to join. These regular, little interactions help to slowly build up your connection.

4. You're not as creepy as you think

When I first started friend dating, I was very hung up on the creep factor of the whole situation. I wanted to seem enthusiastic but didn't want the girl I was out with to think I might try to kill her and wear her face as a mask. Then I realized: In nearly all cases, you're not as creepy as you think you are. I wouldn't suggest showing up at her place of employment with a fresh latte every morning, but a little enthusiasm never hurt anyone. You want to show that you enjoyed yourself and are excited about the friendship.

Though it may seem strange, friend dating is an essential part of making real connections when you're in a new city. We spend hours obsessing over romantic dating, so take some of that effort and energy and put it toward making new pals. Plus, no OKCupid membership required!