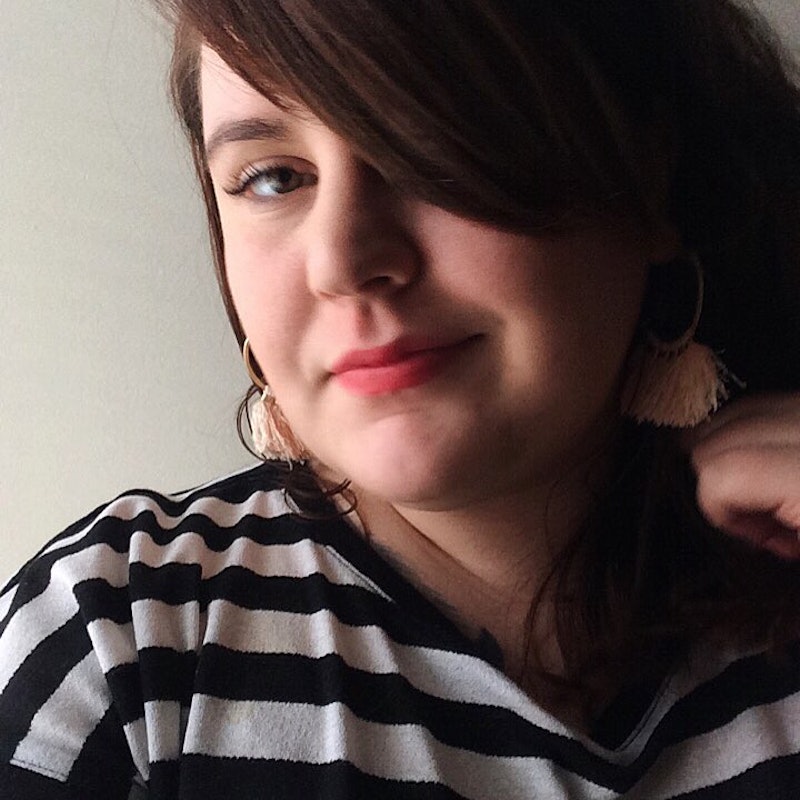 It’s been almost 14 years since that debut rose was handed out on the very first episode of the very first season of The Bachelor — and I’m still tuning in every Monday night. I'm a vocal feminist who loudly identifies as body positive, yet I'm downright obsessed with The Bachelor. I know; it's kind of shocking.

Every week, I make a date to watch the show with my mom, and while I wait patiently on Tuesday mornings to see if my Bachelor fantasy league scores have been updated yet, I also peek in on past contestants' Instagrams. Of course, I never follow them. That would be embarrassing, you know? Instead, I just loyally tune in to spend some time with America's uncle Chris Harrison despite every single problematic element of the show. And there are a few.

OK, there are more than a few things about The Bach that give me pause. My beloved weekly ritual relies heavily on gender stereotypes, reveres a single kind of relationship, pits people against each other to literally compete for love, and each season of each iteration of the franchise is filled with groups of humans who adhere to a pretty specific aspirational look, as defined by the mainstream. There's so much that's changed in the world, in my life, and about me as every most dramatic season yet passes by. But one of the biggest changes is how much I've embraced body positivity and started to see everything through its lens.

I was 14 years old when I started watching this show, and was just starting to question the things I had been told about beauty, femininity, and the "proper" way to earn the attention and affections of men. I also knew that I wanted that attention and, up until then, wearing Chuck Taylors with my school uniform, being an outspoken member of the debate club who listened to punk, and refusing to wear makeup hadn't really been inspiring much of that.

As I watched each rose ceremony, I wondered what dress I would wear if I was up there on those steps waiting for my name to be called. "Nothing white," I would think to myself. Despite being an athlete, I wasn't what anyone would consider small, so I knew I would utilize the tips and optical illusions one could employ to "trick the eye" into believing I was slimmer. My rose ceremony gown would definitely be long, black, slinky, and have a strip of something sparkly down the front. You know, to draw the eye inward and elongate my frame.

As I watched the smiling, slim, (mostly) blonde, (mostly) white women jump from a catamaran into the sparkling blue Caribbean waters, I wondered how they could have agreed to wear a bathing suit in from of all of these other women and on national TV. I picked apart my own body that seemed both too muscular and too flabby. I told myself that it was no wonder that the most I'd done with a guy was a quick and awkward grinding sesh at the latest school dance.

As I grew older and watched from a living room in my new apartment across the country, my friends and I began to heckle the TV: "No one really looks like that when they wake up at 4 AM for a hot air balloon ride," and, "You were up all night drinking at the rose ceremony, how is your skin as dewy as a freaking rose?!" were common complaints. We began to reject the notion that the images being shown to us were the only interpretation of beauty in this world, and the only interpretation we should strive for, as the Bachelors themselves were waxing poetic about how "gorgeous" the babes they were dating were.

Watching The Bachelor this season, the truth about what unsettles me so much about this reality show hit me in the gut. As the contestants talked about how they craved love in their lives or how they desired companionship, or how they were looking for someone to spend their lives with, it was obvious: The show was telling us that these singularly beautiful people were deserving of it. For every round of women who camped out in hotel ballrooms and left jobs or children behind to audition, only 20-something were chosen to compete for the heart of a single dude who was maybe (or maybe not) worth it.

It was when watching a bunch of near-identical young women traipse down the Main Street of a small Iowa town that I realized that I and so many of my friends weren't represented there. We weren't deemed desirable and worthy of love by a TV network. And when they did include someone who deviated from the thin, blonde, white, cis, able-bodied standard, it felt tokenizing. And these outliers were pretty much always voted off immediately. Quite frankly, that sucked.

But then I laughed at myself a little bit. While representation and visible diversity matter quite a damn bit, was this how I really wanted to be represented? Is this where it mattered? It could undoubtedly be powerful for someone to see a contestant up there who they feel looks like them — or to witness the Bachelor choose and openly desire someone who goes against restrictive norms of beauty. I can't deny that such a thing would be pretty rad, and it would probably reach some folks who could us a little body positivity in their lives. But for me, it's not high on my priority list right now. I fully realize this might be because the women who are generally on the show look like me in more ways than they don't — white, feminine, able-bodied, cisgender — but I'd rather get my visibility elsewhere. On a platform that can offer me more than a fix of addictive reality TV.

I'd rather see people with marginalized bodies killing it professionally, achieving greatness, and racking up recognition in relation to things other than whether they're considered "pretty" enough to be a contestant on a reality show. While the TV program that has its place in delivering me wistful and unrealistic romance (plus tear-stained drama) that I use for blissful escapism on Monday nights isn't going away any time soon, neither are the women who are excluded from its definition of beauty. We're here, we see you, and we know that our worth is so much more than whether you find us cute or not.