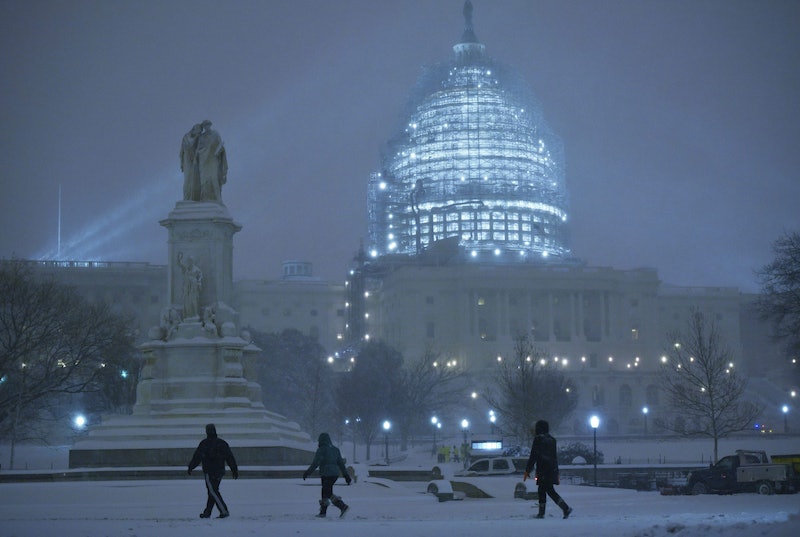 With campaign season underway in full swing, there's been a ton of focus on Republican presidential candidate Donald Trump and his antics. But there's a new player in town, and she's planning to take on not only the Trump rhetoric sweeping the nation but the larger topics at hand — fundamental voter issues like access to women's health care, ensuring debt-free college education, and expanding Social Security. She's State Sen. Pramila Jayapal, who announced a congressional bid on Thursday for Washington's newly vacated seat, hoping to succeed retiring U.S. Rep. Jim McDermott.

Jayapal's unique platform is a reflection of her own personal story. The state senator came to America after her parents raised enough money to send her from India at 16, when she attended Georgetown University. Since then, Jayapal has been heavily involved in civil rights causes and activism, including founding the immigrants' rights organization OneAmerica.

Though this is Jayapal's first bid for Congress, she's already made a name for herself in her hometown of Seattle. The state senator is known for her tenacity — and in the tough world of politics, she's got the thick skin necessary and isn't about to give up a fight. "I'm a bold progressive fighter who will stand up for Seattle's values," Jayapal said in her announcement speech at Seattle Central College. "I'm running for Congress because our system is rigged for corporations and the wealthy. The time has come to tackle this inequality."

Jayapal's no-nonsense approach to running her campaign is admirable, but what makes her most refreshing is her stance on women's health care. Accessibility to woman's health care is one of her main platforms. "With Planned Parenthood under attack, with clinics burning, we can't settle for being on defense. I will fight to expand access to women's health care, and that includes access to abortion care," she said in a guest editorial for Seattle newspaper The Stranger.

As a woman of color, Jayapal's run for congressional seat is making huge strides for diversity in politics. She's currently the sole woman of color in the Washington State Senate, and if elected, will be a member of a small minority of Congress, where women of color make up only 4.5 percent of members. But with Jayapal's bid for Congress and a female presidential candidate in the running, it looks like 2016 could just be the new Year of the Woman.