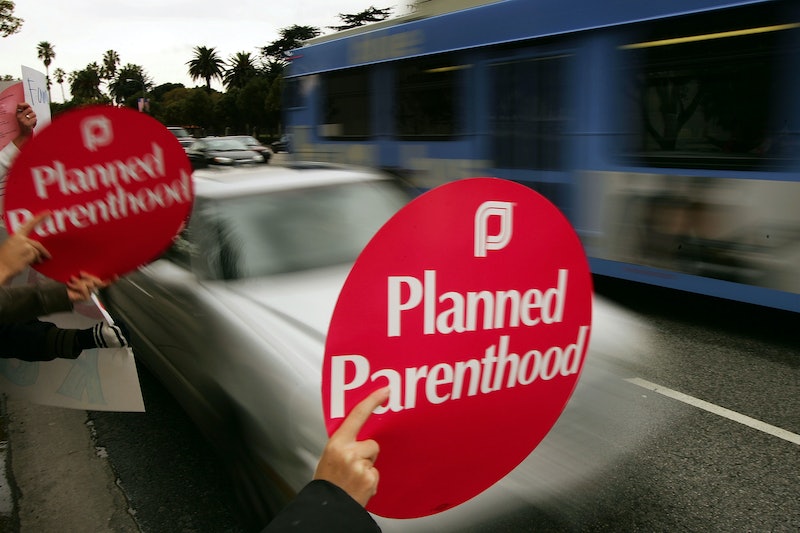 It's been more than six months since the Center for Medical Progress released its first video that claimed to show Planned Parenthood officials attempt to illegally sell fetal tissue, but the consequences of the undercover videos are still very much playing out. A whole lot has happened that led up to a Texas grand jury on Tuesday indicting two people who helped make the videos, including further accusations against the reproductive health organization and actions by every branch of the federal government. It may leave you wondering what the status of Planned Parenthood is today, but this timeline of the Planned Parenthood undercover videos controversy shows how the whole debacle has only made the organization stronger.

This isn't to say that PP hasn't experienced its share of scares since the first videos were released in the summer of 2015. A number of state leaders ordered investigations into the non-profit for alleged illegal activity, with multiple state officials announcing they would be cutting contracts with the organization. Both the Senate and the House voted on bills aimed at defunding Planned Parenthood. The discovery, however, that members of CMP released heavily edited videos in order to incriminate PP representatives has only served to make clear PP's commitment to providing quality reproductive health services for women across the country.

Here's how it all went down.

The Center for Medical Progress releases its first video, which shows Dr. Deborah Nucatola, Planned Parenthood's Senior Director of Medical Services, allegedly discussing the organization's involvement in fetal tissue donation. CMP admits from the outset that undercover actors pretended to be employees of a fake biotech company and presented themselves as potential business partners. Nucatola states in the first video that the organization determined the selling of fetal tissue is "too touchy an issue" for PPFA to become officially involved as a middleman, but the director also generates backlash at her stating there are conversations happening with affiliates "behind closed doors." In its response, the non-profit says the videotape "falsely portrays Planned Parenthood's participation in tissue donation programs that support lifesaving scientific research."

Planned Parenthood President Cecile Richards appears in a video statement to respond to CMP's allegations. In the video, Richards asserts that Planned Parenthood in no way profits from the donation of fetal tissue, and that the organization's practices follow all legal and ethical guidelines. Richards explains that "in some instances, actual costs, such as the cost to transport tissue to leading research centers, are reimbursed, which is standard across the medical field."

Over the course of nine days, CMP releases three more videos, all purporting Planned Parenthood's work with fetal tissue donation is carried out illegally. Two of the three videos include footage taken from inside a clinic, where PP representatives show samples of fetal tissue to CMP actors. The videos also bring StemExpress, a tissue research company and then-Planned Parenthood partner, into the controversy, with a former StemExpress tissue procurement technician appearing in the third video.

Officials from a number of states — including Indiana, Massachusetts, Georgia, Kansas, and Florida — order investigations into the practices of Planned Parenthood clinics within their states, with most failing to find any evidence of illegal activity. A Florida state health agency's report, which claims PPFA performed some abortions without the proper licenses, is later found to have been altered by the governor's office to exclude statements exonerating PP of illegal tissue donation practices. On the concluded investigations, Planned Parenthood Executive Vice President Dawn Laguens states, "We've said all along that Planned Parenthood follows all laws and has very high medical standards, and that's what every one of these investigations has found."

The U.S. Senate votes on legislation that would stop federal funding for Planned Parenthood, but the bill fails to get the 60 votes required to overcome a filibuster by Democrats. Following the unsuccessful vote, GOP presidential candidate and Texas Senator Ted Cruz states that the GOP should use "any and every procedural tool available" to defund the women's center.

The Center for Medical Progress releases three more videos after the restraining order is lifted. In video clips and related press releases, CMP regularly references the fact that the selling of human fetal tissue for profit is prohibited by law, and the edited film makes Planned Parenthood representatives appear as though they are negotiating prices for tissue donations. A former StemExpress technician who was interviewed in the third video appears again, and the footage alleges that tissue may have been used for donation without the consent of the women having the abortions. The accusations are made despite Richards's earlier statement that donations are done only with the "full, appropriate consent from patients."

In the eighth video released by CMP, actors speak with the CEO of StemExpress, Cate Dyer. Dyer states in the clip that StemExpress has received a lot of "intact cases," or fetuses, in the past. In the press release published in conjunction with the video, CMP suggests that these intact fetuses used for organ harvesting are "likely to be born-alive infant[s]." Two days later, Richards writes a letter to Congress, stating that "there is absolutely no indication [the centers] have deviated from the law or done anything inappropriate" and that "Mr. Daleiden and his associates have sought to infiltrate Planned Parenthood affiliates and unsuccessfully to entrap Planned Parenthood physicians and staff for nearly three years."

The U.S. House of Representatives votes on a bill that would defund the reproductive health non-profit for one year. The year-long window would allow an investigation into Planned Parenthood practices before reinstating federal funding. The bill passes 241-187, but with the expectation among government officials that it will not be approved by the U.S. Senate or, should it pass, it will be vetoed by President Obama.

While PPFA maintains it does not turn a profit from fetal tissue donations, the organization makes clear that one Planned Parenthood center in California legally received reimbursement for the costs of storing and processing the donated tissue. In the midst of the controversy, the non-profit announces that it will no longer accept reimbursements for administrative costs related to fetal tissue donations at any of its centers nationwide. Laguens states that the decision shows Planned Parenthood is "not going to be bullied ... into walking away from important research."

In November a gunman later identified as Robert Lewis Dear, Jr. attacks a Colorado Springs Planned Parenthood clinic, killing three and injuring nine. Dear makes a comment that includes the phrase, "no more baby parts," to authorities in an interview following his arrest, according to a law enforcement official who doesn't disclose his identity. And at a courtroom appearance in December, Dear refers to himself as "a warrior for the babies." Reproductive health care facilities reportedly see an increase in attacks by "pro-life extremists" following the release of the first video.

President Obama formally vetoes the bill put forth by Congress, stating in his veto message that eliminating funding for a major reproductive healthcare provider like Planned Parenthood will "disproportionately impact low-income individuals."

Planned Parenthood files a lawsuit against CMP and BioMax, among other groups potentially involved in creating the undercover videos, for federal racketeering. The non-profit accuses the companies of attempting to defraud Planned Parenthood and prevent the provision of reproductive health services to women and men across the country.

A Harris County, Texas grand jury indicts David Daleiden and Sandra Merritt, a CMP employee, on a felony charge of tampering with a governmental record. Planned Parenthood officials argue that the two edited the recorded conversations in order to falsely portray the organization's tissue donation practices as illegal. Daleiden is also indicted on a misdemeanor charge of prohibiting "the purchase and sale of human organs." If found guilty, the two anti-abortion activists face up to 20 years in prison.