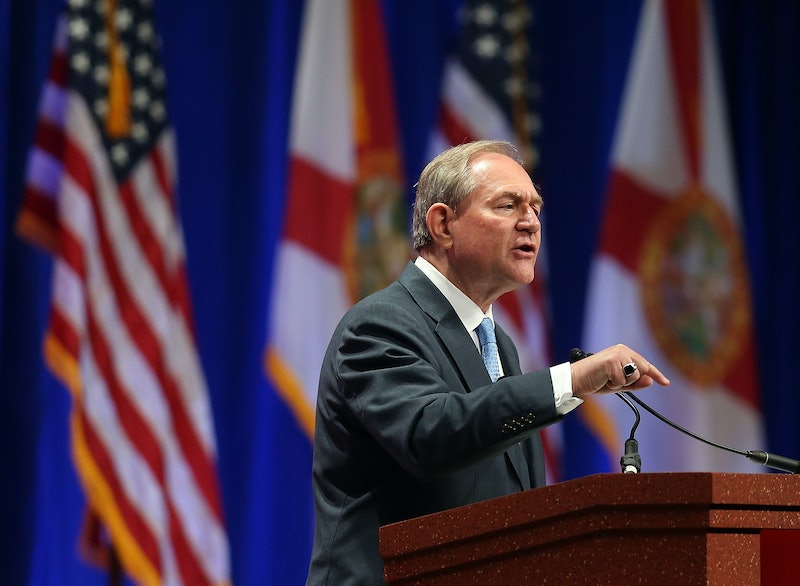 If you haven’t heard the name Jim Gilmore this presidential campaign season, chances are, you’re not the only one. The former Virginia governor, who's running for the Republican presidential nominee, just scored a spot at the next Fox News undercard debate on Thursday night. He’ll be joining the ranks of Carly Fiorina, Mike Huckabee, and Rick Santorum, to name a few — candidates who all didn’t qualify for the main stage but still got at least 1 percent support in a national poll. So who is this unknown underdog, and how will the debate affect Gilmore's GOP presidential hopes?

Gilmore, who’s been called the “hermit candidate of 2015” by the Washington Post, hasn’t been seen on a national debate stage since August when he qualified for Fox News' JV squad. Apparently, Gilmore recently hasn’t really been seen much… anywhere. The 65-year-old candidate never held a kickoff rally with supporters and instead announced his candidacy alone on video, speaking to the camera in a live webcast from the Iowa GOP headquarters. But according to Gilmore, his lack of screen time and attendance at live campaign events is for good cause: “We’re too busy getting the pieces in place. It’s significant,” he said in an interview with the Washington Post.

This isn’t the former Virginia governor’s first swing at bat — he ran for president in 2008, though he withdrew due to lack of funds. This time, though, it looks like Gilmore is back in the game to tackle economic issues by cutting taxes and addressing national security by securing the border. “I don’t think we’re addressing the threat to the country,” Gilmore told the Times-Dispatch. “I bring to the table experience that others don’t have.” One of the roles Gilmore cites in his foreign policy experience is his past chairing the National Commission on Homeland Security.

Though Gilmore sounds confident in his campaign, the polls haven’t been looking so hot for him. Gilmore has rarely received more than 1 percent in a national poll, and typically even polls at 0 percent. But with the opportunity to speak on the national stage on Thursday, and Trump refusing to participate in the last Republican debate before Iowa caucuses, this could very well be the underdog’s chance to shine. “I’m in this thing to offer the best candidacy because I ought to be the president,” Gilmore said in the Palm Beach Post. “Now we’ll see if we can make the politics work.”