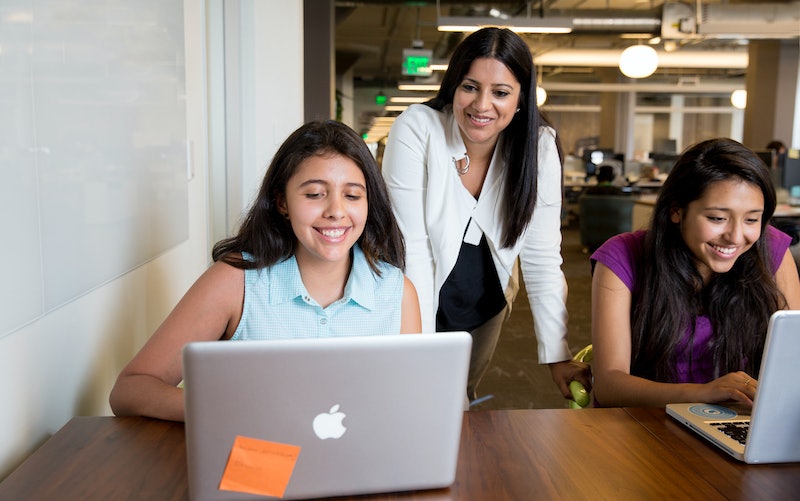 Lawyer, politician, and activist Reshma Saujani is living proof that no one is limited to choosing a single path toward making a positive change. As founder of the organization Girls Who Code — a nonprofit that teaches young girls how to code and program — Saujani is passionate about bursting society's bubble of outdated social and gender norms, insistent on resisting others' restrictive expectations, and steadfastly determined to help individuals unapologetically follow their own dreams. Above all, she wants to encourage girls to support each other, confidently step up to the leadership plate in all fields, and not be discouraged by the prospect of failure. Throughout her own life, she's applied that advice to herself, making her the perfect example of a woman who's out to actively create change and never settle for anything less.

Saujani is no stranger to "failure," but every leap and bound she dared to take paid off in the long run, adding facets to her life experience and character. “I think that we as women have to embrace failure, and that we have to chase it," she says. "I have failed two elections publicly — it’s been humiliating … you know, I get rejected all the time — but I put myself out there."

In 2010, Saujani, who was a hedge fund lawyer at the time, chose to run in the Democratic primary to be one of New York's House Representatives. By then, she had accumulated at least six years of political activism for presidential candidates including John Kerry and Hillary Clinton. Though she lost against the incumbent, she became the first Indian-American woman to run for Congress.

The decision made her stronger, and even inspired her to take another risk and create Girls Who Code. "For me, when I ran for Congress, people thought I was literally crazy, [and thought] I have no chance of winning. And I probably didn’t, but if I didn’t try, I kind of would have lived in the shadow of my potential," Saujani recalls. "I wouldn’t have known what could have been possible. And had I not lost that race, I never would have started Girls Who Code. So what I want to teach young women is just ... to fail. And I think that if we fail, we’re going to get closer to our dream. And we’re going to lead.”

But before creating Girls Who Code, Saujani worked to fulfill a different, equally worthy aspiration. In 2010, the same year she lost her race for public office, Saujani found a different way to become highly involved in the public advocacy sphere. Appointed the Deputy Public Advocate of New York City, she kickstarted the DREAM Fellowship, which aimed to help undocumented children pave better futures for themselves. Saujani herself is the daughter of Indian immigrants who had to flee Uganda, which was under the tyranny of a dictator. She attended the University of Illinois and earned the highest academic honors. She says that the DREAM Fellowship was created with the intention of providing immigrant children with the opportunity to excel as she did.

So what I want to teach young women is just ... to fail.

After launching Girls Who Code in 2012, she immersed herself in fields which she says "terrified" her during her childhood: math and science. “I am not a coder," she stresses. “When I was growing up, when I would say that I wasn’t good at math or science, or I would shy away from it, people would let me do that … So that’s what I’m trying to figure out." She points to a major underlying question Girls Who Code is trying to address: "Why do we let our girls think they’re not good at things when they are good at things?"

The Girls Who Code website primes readers with some important statistics that prove there is a major gender gap in the technological field. For example, 74 percent of middle school girls show interest in Science, Technology, Engineering, and Math (STEM), but only 0.4 percent of those girls pursue computer science as a college major. Even more shocking, the gender gap in the computer science field has actually widened since the 1980s. In 1984, women made up 37 percent of computer science graduates. Now, it's just 18 percent. And the decline can't be blamed on a lack of interest or a shortage of industry jobs.

And according to Saujani, bringing women into the field is more important than ever in our technological age. “Instagram, Snapchat, Twitter — they changed everything about the way we communicate, and I think girls have to be a part of it … the consumers of so many products are girls and are women. So I think that there’s a kind of desire to disrupt, and to have women be the center of that.”

Girls Who Code isn't just about integrating girls into the world of coding — it's about creatively expanding the application of coding knowledge itself. For Saujani, the applications are endless, reaching far beyond the boundaries of computers. “It’s about using technology for whatever it is that you want to do," she exclaims. "I want to see our girls start their own companies, I want to see them go to Africa and figure out how to get access to water for communities, and I want to see them solve world hunger. I want to see them use tech to be an agent of social change.”

Saujani's mission isn't a simple one. There's a deeper societal problem afoot here. But it's those complex, ingrained dilemmas that keep her going. As she confronts them in her everyday life, she doesn’t simply maneuver her way around them. Instead, she seeks solutions; a way to disrupt them. This is why she defines herself foremost as a "disrupter." She adds, "That’s kind of what I get excited about: deeply entrenched problems, and figuring out how you solve them and build movements to solve them.”

It doesn’t sound so different from solving a math problem. But the dilemmas keep coming her way. Her next step is advocating for paid leave for parents of newborns. She admits that as CEO of a nonprofit and the mother of an 11-month-old, it can be tough. "I really think that we have not created a society that makes it possible for parents to bring their whole selves to their careers and bring their whole selves to parenting," she tells Bustle.

This is why no one can sum up Saujani's career too neatly. Her goals are manifest in determined actions that tackle a variety of causes, including education for immigrants, promoting the inclusion of Southeast Asian citizens in the political sphere, and now, narrowing the gender gap in the technological industry. Each cause, not matter how diverse, harmoniously connects back to Saujani's own life experience, as well her determination to never set a limit for herself or settle for society's flaws. Sometimes, the only way to create change is to disrupt the norm.