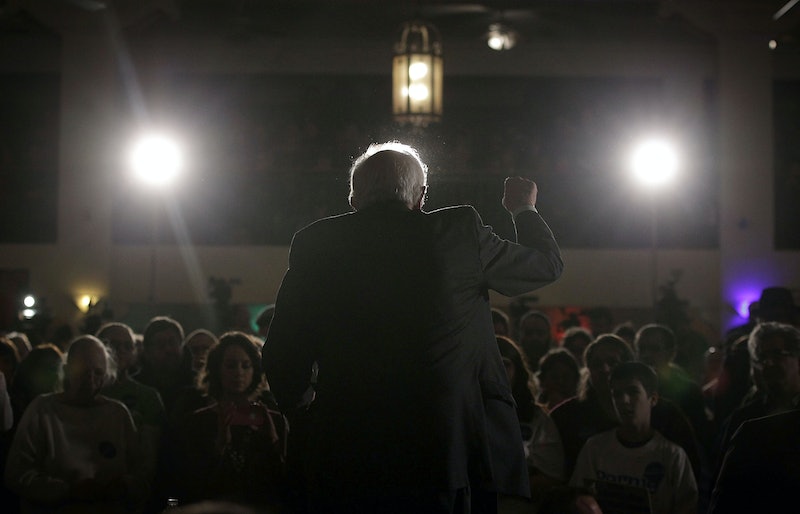 Bernie Sanders has long told voters, "this is not about me, it's about you." But the message seems to have been forgotten by many as caucus fever takes hold and curiosity about potential Oval Office occupants lead the media to pick apart the personal lives of presidential candidates. Articles, like Politico's recent feature "Bernie Sanders Has A Secret" fuel probes into the private relationship between Sanders and his son Levi. Sanders has managed to keep a lot of details about his family largely on the down low, which shouldn't upset voters given his resume as a father isn't what determines his electability or qualifications for presidency.

Unsurprisingly, Google search queries on Sanders have spiked since he announced his bid for the Democratic presidential nomination, but those looking to dig up juicy details on Sanders' family life are likely to be disappointed. While Hillary Clinton saw her family thrust under a microscope when her husband was elected president in 1993, the Vermont senator has been largely able to fly under the radar for most of his political career. Sanders, who likes to keep talk focused on his policy, hasn't been shy about voicing his frustrations when the media (or the competition) tries to get too personal. "More stuff has been written about my hair than my infrastructure program or my college-education program — no question about that," Sanders complained to Rolling Stone last July.

Sanders has never kept his son a secret. Levi, who was born in 1969 to Sanders and Susan Campbell Mott, was a toddler when his father began his political career. As Sanders' only biological son, Levi has been known to lend a helping hand (literally and figuratively) to his father's political endeavors. In a Dec. 27, 1987, episode of the cable access show Sanders hosted while mayor of Vermont, a college-age Levi stands in the snow to hold a microphone for his father. Levi was spotted on the campaign trail back in August, introducing his father at two New Hampshire town hall events, according to CNN's Dan Merica. In October, Levi and his three children (all adopted from China with his wife, Raine Riggs) appeared onstage with Sanders at a town hall event.

Although Levi has never given an in-depth interview about his childhood, he previously told People Magazine they had a good relationship despite the fact he doesn't called Sanders "Dad."

Rolling Stone's feature on Sanders last July included a momentary glance into the easy camaraderie that Levi characterized his and Sanders' relationship with. While sorting through unemployment statistics between campaign events, Sanders is said to have reached over and taken "a massive bite" from the eggplant-parm sandwich Levi was eating beside him.

But Sanders is right when he says, "this is not about me, it's about you." Voters should care more about where a candidate stands on the issues that matter to them than if they were divorced, born in Canada, or once had a husband who cheated on them. The facts that are important to take to the polls revolve less around a candidate's personal life and more around their policies.