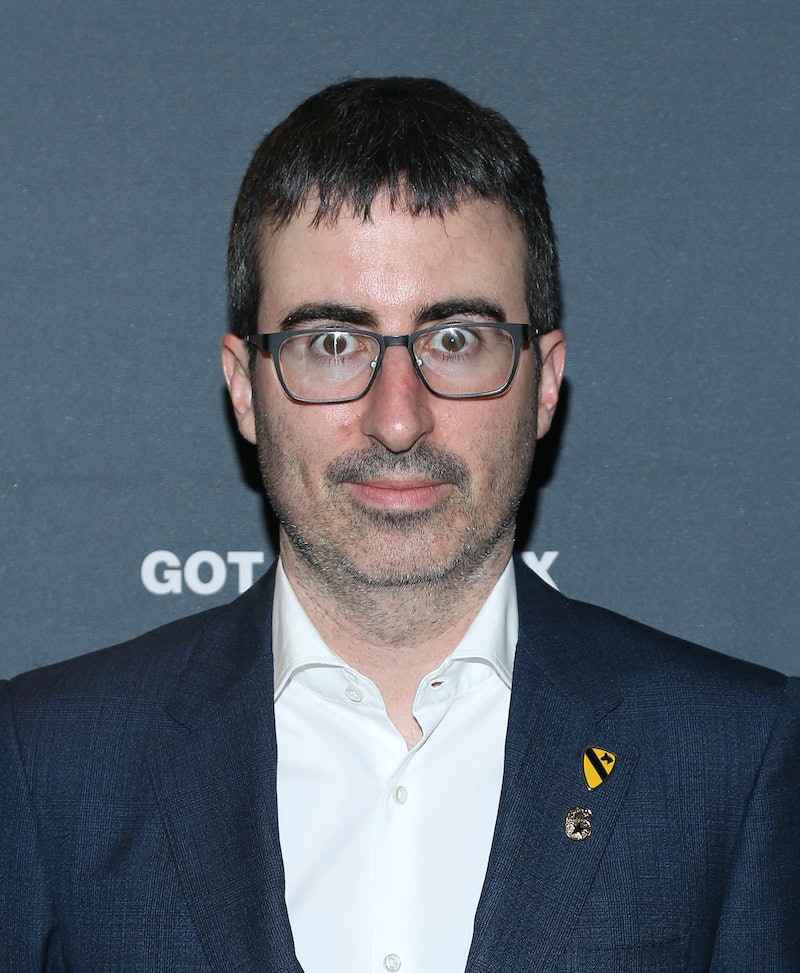 Everybody loves John Oliver, right? He's English, came from The Daily Show, knows American politics better than most Americans, and can make a debate into a clown car with just a single, logical point. Oh, and did I mention he's English? Democrat, Republican, Pizzafarian — most can agree that the guy is hilarious. Over the course of his show, Last Week Tonight, audiences have seen him cover LGBT issues, migrants and refugees, FIFA, online harassment, education, and essentially every issue in present-day American culture. However, audiences have not seen Oliver admit to American traditions he secretly loves to hate — or perhaps just secretly loves.

One can only speculate, but these seven times Oliver covered American culture are bound to bring curiosity — and plenty of laughter — to fans of the show. Whether it's his confusion over the presidential tradition of pardoning the Thanksgiving turkey, his strange fascination with American televangelists, the popular American resignation to do nothing beyond that which they already know, or the hazy line between "I'm full" and "I can't move," Oliver always comes through in a bind. And naturally, no less is expected of him because he'd not expect any less of himself.

Come on, Oliver not-so-covertly revels in the catchiness of these standardized testing jingles. He is ready with his No. 2 pencil.

Patriarchy, anybody? Oliver definitely loves this one — especially the contestant doing her "impression of a dictionary in a washing machine." But in all fairness, how could he not go there? In his own words:

Through it all: the swimsuits, the dance numbers, the inexplicable ventriloquism, it was very difficult not to think 'how the f*** is this still happening?'

"Tobacco: it used to be a cornerstone of American life. It was how we knew sex was over before the female orgasm was invented." He nailed that one. As well as, "That, of course, is the iconic Marlboro Man, as synonymous with ruggedness and freedom, as he was with dying from smoking-related diseases. Because — and this is true — that's what happened to at least four of the actors who played him. Four dead actors. It's like if there was a gas leak on Who's Line Is It Anyway." In this segment, Oliver somehow manages to cover America's entire history of tobacco use in under 20 minutes. He even made mention of his love for hating tobacco in a separate news segment:

Even Oliver has trouble discussing this long-standing American tradition, so I'm just going to leave this quote here:

The death penalty is like the McRib. When you can't have it, it's so tantalizing, but as soon as they bring it back, you think, 'This is ethically wrong. Should this be allowed in a civilized society?' And by the way, there is your new slogan, McRib. You are welcome. You are welcome.

There's that whole, pesky Washington Redskins controversy again. Half of white America believes the name should remain as tradition would have it, and the other half finds it highly offensive. Oliver explains this dichotomy perfectly:

Wow, for the average American, that should target one-sixteenth of your heart strings and make the rest feel extremely guilty.

As Oliver so aptly puts it, "Churches are a cornerstone of American life. There are roughly 350,000 congregations in the United States and many of them do great work — feeding the hungry, clothing the poor, but this is not a story about them. This about the churches who exploit people's faith for monetary gain." Whoa. I mean, yeah, everyone knows the Bible is unalienable, inerrant, immutable, and only open to a specific, narrow interpretation. Just listen to these guys!

OK, this one is from The Daily Show, but it still reveals Oliver's love of American gun laws by comparing them to the political suicide faced by Australian politicians. Because, remember, gun laws will never stop a bad guy; the only thing that can stop a bad guy is an out-of-shape, overly-medicated, paranoid guy who conceal-carries in a Home Depot to protect the lumber aisle from ISIS.

For anyone who just needs more of Mr. Oliver — dare I suggest, everyone? — HBO has many episodes of Last Week Tonight readily available. There, fans may discover further American traditions Oliver secretly loves — or loves to hate.