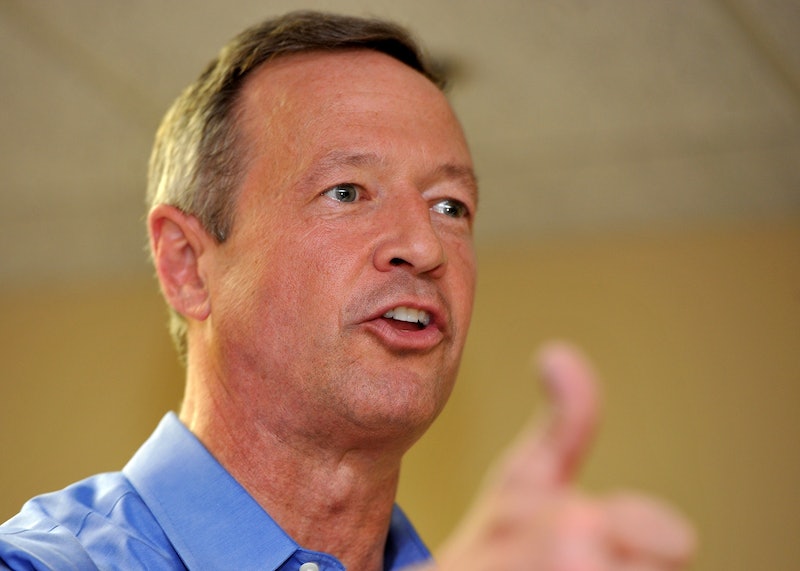 The Iowa caucuses are tantalizingly close, and Bernie Sanders and Hillary Clinton are in a statistical dead-heat in the state's Democratic contest. There's a third candidate in that race, of course, and while he doesn't have a legitimate chance of winning, he's not entirely counting himself out. In Iowa, Martin O'Malley won't be playing tie-breaker, as past candidates have. Instead, he's breaking with tradition in a big way that could affect all three candidates in the race.

The Iowa Democratic caucuses are extremely complicated, but the issue here is relatively simple. Let's imagine that Clinton, Sanders, and O'Malley are three college friends ordering a pizza. When it arrives, the pizza has mushrooms on it, but O'Malley hates mushrooms. Rather than give his slices to Clinton to Sanders, though, he simply throws his share in the garbage. That's essentially what the former Maryland governor is doing on caucus night in Iowa.

OK, so here's how it goes down. In the Iowa Democratic caucus, supporters of the various candidates attend their local precinct (that is, caucus site) and attempt to convince other voters to join their camp. At the end of the night, each precinct tallies up the total for each candidate, and that precinct's delegates are awarded proportionally.

But in order to get any delegates at all at an individual precinct, a candidate has to be deemed "viable," meaning they're supported by at least 15 percent of the people in the room. And therein lies the problem for O'Malley: He hasn't polled above single digits in Iowa yet. If his supporters can't convince 15 percent of the attendees at an individual precinct to vote for O'Malley, the former Maryland governor will receive no delegates at all from that precinct.

Normally when a candidate fails to reach viability in a precinct, their supporters will simply support somebody else instead. That's what Barack Obama did Iowa in 2008 — his campaign picked off supporters of low-polling candidates like Bill Richardson and Chris Dodd, and that helped him eke out a win in the state over Hillary Clinton.

O'Malley, however, is telling his supporters and precinct captains not to do this. Instead, his campaign has decided, O'Malley supporters should simply walk away from the caucus site and take their votes with them if they can't reach viability — essentially telling his supporters to take their toys and go home if they're not invited to play. This matters because it's quite possible that Sanders and Clinton could end up in a tie delegate-wise. If that's the case, O'Malley supporters would potentially have the ability to act as tie-breakers in the state.

But O'Malley doesn't want to do that, presumably because he doesn't want to admit defeat in the state, or the primary in general. That's understandable on an emotional level, but in all honesty, O'Malley isn't a serious contender in either Iowa or the nation, and he hasn't been at any point in this campaign. If Iowa does end up a tie, O'Malley's strategy will have accomplished nothing other than irritating both Sanders and Clinton, and why would he want that? Most candidates don't do what O'Malley is doing in Iowa, and for good reason.