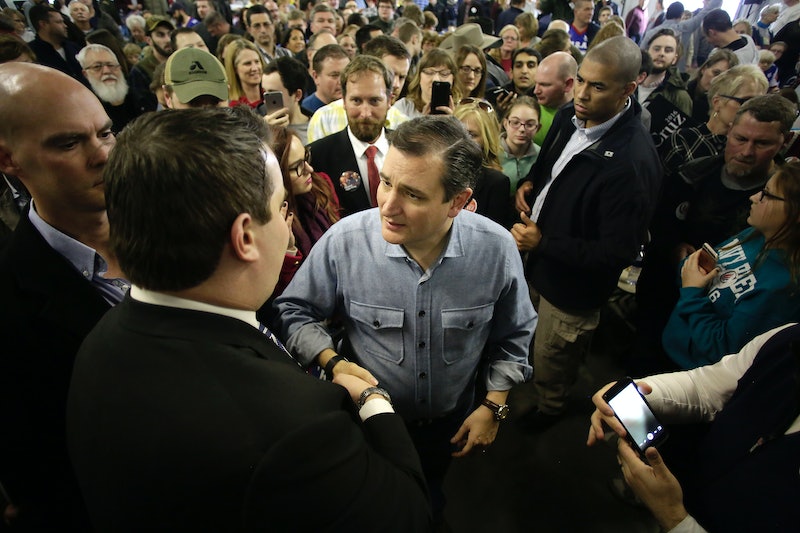 The first votes of the 2016 presidential race will be cast on Monday, and in Iowa, both the Democratic and Republican races are coming down to the wire. Unlike most states, Iowa selects its presidential nominees not through a primary, but through a series of complex voting events known as caucuses. If you're not quite sure how the Iowa caucuses work — and that would be understandable, given how absurdly complicated they are — here's a guide.

First of all, not all caucuses are created equal. The process is different for Democrats than for Republicans, and it's the Democratic one that's more confusing. For Republicans, though, it's rather simple: Everyone shows up at their caucus site, casts a secret ballot for a candidate, and leaves. Each caucus site is worth a predetermined number of delegates, and it distributes those delegates proportionally to the candidates. Easy, peasy.

For Democrats, it's a much more complicated process. In essence, though, Democrats gather at caucus sites and try to convince one another to support the candidate of their choice. But candidates are disqualified if they fail to meet a certain threshold of support, and then there's another process later down the line through which the delegates are actually allocated. Oh, and we haven't even touched on superdelegates yet.

Like I said, it's complex. You could even argue that it's needlessly complex. Thankfully, there a number of resources and explainers that help clear things up a bit.

How Voting Works At The Democratic Caucuses

This two-minute video from Vermont Public Radio is a good primer on the voting process in the Iowa Democratic caucus. As an added bonus, it has Legos.

If you want a more practical feel for what a caucus actually looks like, check out this on-the-ground report from the Iowa caucuses in 2008, courtesy of TheRealNews.

The Ins-And-Outs Of Delegates

You'll be hearing quite a lot about delegates between now and the two parties' national conventions. CGP Grey produces some of the best explainer videos on the Internet, and his overview of presidential primaries has an excellent, easy-to-understand explanation of what a delegate actually is.

In addition to delegates, there are superdelegates. This short video from Newsy explains what they are, and why they matter.