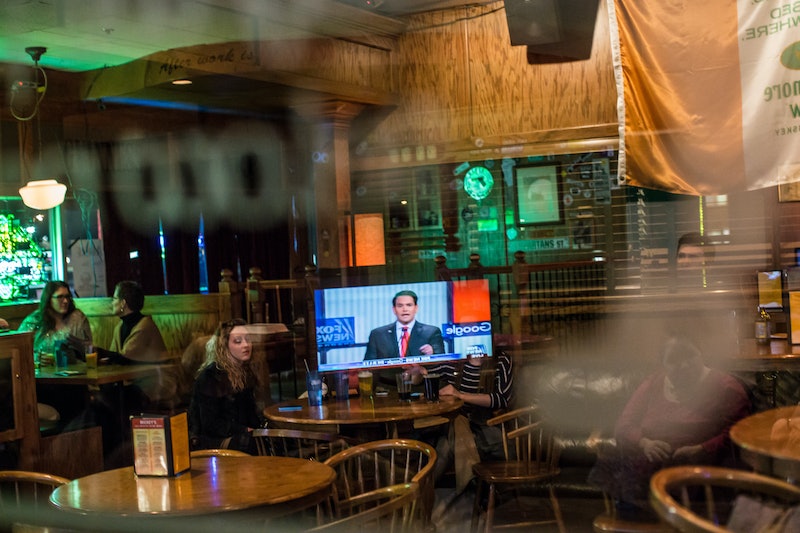 Imagine rolling out of bed, shuffling to the living room, and flipping on the TV — the first part of your morning ritual (even before turning on the coffee pot). What peers back at you from the screen? A clip of Ronald Reagan from the 1980s. Now you can skip the caffeine — you're wide awake. Change the channel? A Jeb Bush super PAC is tearing into Rubio. Or maybe it's Trump attacking Bush. Channel surf all you want. What you'll find on TV in Iowa leading up to Monday, Caucus Day, is an unending barrage of political ads supporting and then attacking every candidate still in the race. Can't be there to caucus? You can live at least part of the Iowa primary experience by watching these ads all day today on YouTube.

After the caucuses, the people of the great state of Iowa will get a reprieve. The ads will be limited to those airing on national television — at least until the general election picks up. It's only fair they get a break. The latest batch have contained a mixture of so many cornfields, Bibles, and American flags that even the most stereotypical of Iowans needs a breather. The head of political science at the University of Northern Iowa, Donna R. Hoffman, Ph.D., told The Wall Street Journal that the saturation has reached the point that they might not even work:

Basically nothing, I think, to Iowans is standing out to this moment because we've hit such a saturation. That lends a question to the effectiveness.

As of Jan. 25, The New York Times reported that candidates had spent $40 million on broadcast ads in the state and another $13 million on cable channels. PACs and super PACs have spent more on top of that. So be glad you're not spending your free time in Des Moines listening to these gems ad nauseam.

In this ad, Cruz attacks Trump's days as a developer and the process of eminent domain used to take over private property for public use. The ad accuses Trump of colluding with Atlantic City officials and demolishing an old lady's house to put up a parking lot. Don't miss this lady call him out.

Trump On Cruz: "What Is He Talking About?"

This Trump ad fires right back and shows a tongue-twisted Cruz searching for a way to defend his support of an immigration reform bill on Fox News. On screen reads "pro immigration" and "pro amnesty" as Cruz talks but then goes on to feature Trump speaking about limiting immigration with "Trump will end illegal immigration" at the bottom in capital letters. Subtle.

Just in case 30 seconds wasn't annoying enough. Rubio bought 30-minute television ads (yes, 30 minutes) in all of Iowa's television markets over the weekend. The long version featured clips from town halls he held on the campaign trail, like this one in Waterloo, Iowa. "Our rights come from God," he said in this clip — attempting to appeal once again to evangelicals in the state. The only thing worse than short clips taken out of contest (or his immigration "Invasion" ad) might be listening to Marco Rubio for 30 minutes.

This ad from the super PAC Right to Rise, which is supporting Bush, claims that Rubio put more than $20,000 in personal expenses on a party credit card. It implies he has bad judgment, skips important votes in Washington, D.C., and can't make up his mind on immigration. The best part? Rubio's face 17 seconds in as the screen flashes "refused." Don't miss it.

Rubio's Boots Are Made For Flippin'

Then there's the bright cheery side to political ads. This one, deemed by Red State to be one of the worst political ads ever, is at least up beat in its attack. I'd quote the lyrics but I really don't want to ruin it for you.

Referencing his earlier "These Hands" ad, Ben Carson released a new ad saying that America's safe in his hands because he has saved so many lives. "Carson spent his entire career holding a child's life in his hands." It also says he can look death in the eye and not blink — but is that impressive when it's somebody else who might die?

Jeb's Mom Talks About Him, Since No One Else Does

So despite the attack ads that super PACs supporting Jeb Bush are running, no one seems to be returning the shots (this Trump trolling from September remains pretty amazing though). Well, I guess the Bush campaign figured if no one else was going to talk about him, his mom could. Former First Lady Barbara Bush stars in a recent release talking about how her son would make a good president (not mentioning of course the other one who... well, not so much).

Bernie Goes After Banks (Oh, And Hillary Is Implied)

The Democrats are playing significantly nicer — but Bernie Sanders' latest ad implies some things about Clinton. The target of the ad is Goldman Sachs, a firm the ad blames for the 2008 financial crisis. Then it goes on to say that politics shouldn't be corrupted by "millions in campaign contributions and speaking fees" — a clear dig at Clinton who has accepted speaking fees from the Wall Street firm in the past.

And Clinton? She's Banking On Her Experience

Clinton touts her experience from first lady, to senator, and then secretary of state in her last big ad asking Iowans to caucus for her Monday. Starting with an image of the White House the narrator says, "The person who lives here has to solve problems as big as the world and as small as your kitchen table.” Definitely a winning argument.

Political ads, though, aren't everything, especially in a state with so much direct interaction with the candidates. Monday night's results should provide a better idea of whether or not Iowans were listening.