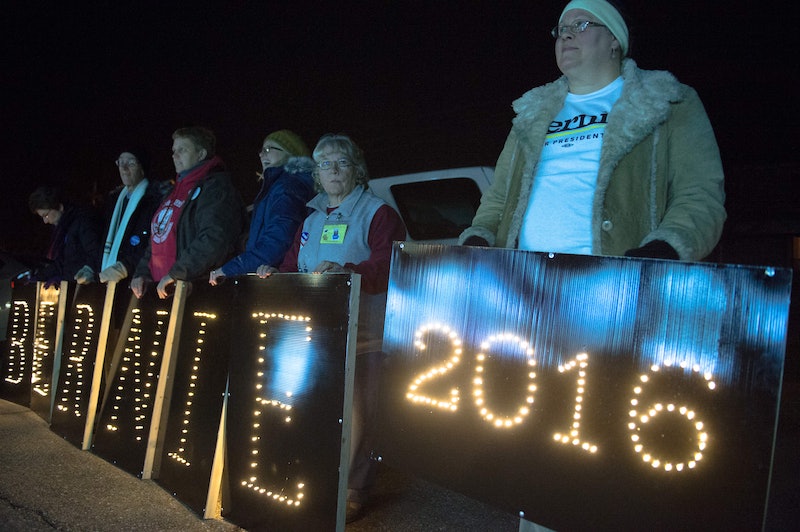 Leading up to the Iowa Caucus Monday, Democratic candidates Bernie Sanders and Hillary Clinton — and millions of their supporters — have been having the "electability" talk. Who is in the best shape to beat Trump, Cruz, Rubio, or whoever the Republican nominee ends up being? The early answer was Hillary, of course, but Bernie's recent poll numbers have been strong against the leading Republicans. The results of Monday's caucus could change all that very quickly.

Should Sanders weaken Clinton's position of "inevitability" by winning Iowa or New Hampshire, there could be a complete transformation in his poll numbers when stacked up against the Republican frontrunners. That's because he'd be a frontrunner too. So far — besides some derogatory comments from Trump in the fall and again in January — the Republicans have focused their attacks on Clinton. Be it her emails, or one of the other myriad attacks lobbed at her over the years, Clinton has come out standing strong.

As Lee Miringoff, the director of the Marist College Institute for Public Opinion, told Politico, the current poll numbers don't have much to do with how the general election would play out:

It’s a big leap of faith to take primary poll data and jump to the general. You do ask the questions, and it tells you something: Hillary has a problem with independents, and Bernie doesn't. Fast forward to September, October and November. The campaigns will change, and that dynamic will be different.

If Sanders became the frontrunner — or if he even seemed to have a decent chance of securing the nomination — there's no doubt that they would start laying into him too. And they'd have plenty of fodder. As Politico put it, "'Socialist' could be a one-word silver bullet against Sanders."

George Stephanopoulos brought the matter up on ABC's This Week Sunday, asking Clinton if she thought Sanders' "democratic socialist" views would hurt the Democratic party up and down the ticket. She said yes:

That certainly is what a lot of Democratic leaders are saying. And I take them at their word. They know their states, they know the country, they know we have to take back the Senate. They want to make some advances in the House as well as at governor and legislature levels across the country ... And if there are issues that Republicans and their allies on the right believe they can use to bring down a Democrat, they're going to use it.

Sanders, when asked the same question — whether he would be "slapped" with the socialism label — responded that Clinton has her own problems, one of them being that the GOP won't let go of her emails. Sure, but they haven't let go of or let up on her emails or Benghazi since 2015 and 2012 respectively.

Sanders is essentially fresh meat. Even among likely Democratic caucus goers, a full 25 percent said they don't think it would be okay to elect a "democratic socialist." That's according to the latest Des Moines Register/Bloomberg poll released over the weekend. Imagine how Independents will react if a full 25 percent of Democrats have a problem with it.

Sanders' national image has been constructed solely through this campaign. That's why in September he wasn't very well known nationwide in comparison to the early voting states. As he has become better known, his nationwide poll numbers have improved to where we see them today. There's maybe room for more improvement (Clinton has been polling around 50 percent with Dems nationwide with Sanders at 38) but he's still in a gray area where some people haven't decided what to make of him.

In the CNN/ORC poll released Jan. 25, about 8 percent of Americans had never heard of Sanders and 9 percent who had no opinion. Statistically speaking, everyone has heard of Clinton and only 3 percent have no opinion. So any attacks would reach 17 percent who are basically blank canvases ready for the Republicans to infect against Sanders.

Whether or not any character attacks focused on Sanders' "socialist" views could work depends largely on his ability to respond effectively and maintain some control of the conversation. But if Sanders wins Iowa or New Hampshire, some Republican super PACS will probably start getting the ball rolling.