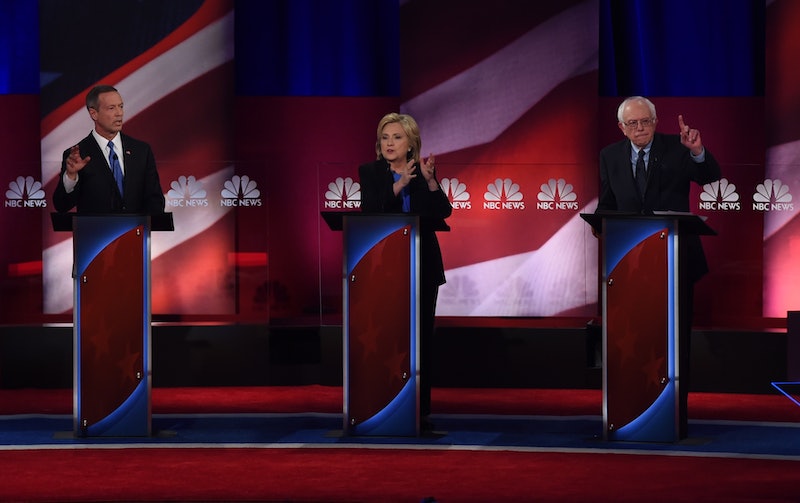 Throughout the presidential election season, the Democrats have held fewer debates than their Republican counterparts. Additionally, they've done so at more awkward times. As the nation's early primaries approached, however, the three Democratic candidates displayed a newfound sense of urgency, and asked the Democratic National Committee to amend their schedule so that they may gain additional time to show America why they should be elected president. In response to the request, the DNC has made the Democratic debate schedule considerably more rigorous, adding four additional debates.

Prior to the request, Democratic candidates Bernie Sanders, Hillary Clinton, and Martin O'Malley were scheduled for two more debates — on Feb. 11 and March 9. These dates still stand, but voters should expect another four in addition to them. The first of the four new debates will air Thurs., Feb 4, and will be preceded by a more casual question-and-answer-style event in New Hampshire, where candidates will take inquiries from audience members. The forum event will be hosted by CNN's Anderson Cooper, and marks the candidates' shifting focus from Iowa to New Hampshire.

After the Iowa caucus, the New England state is the first to conduct primary elections, which will occur Feb 9. The state's Democratic Party chair Raymond Buckley emphasized the immediacy of interacting with New Hampshire's voters before the primary:

We have three incredible Democratic candidates running for president and this is a fantastic opportunity for voters in New Hampshire and around the country to hear their plans to build on the progress we've made just days before the New Hampshire primary.

The dates of the other three debates have yet to be determined, but are expected to be spread out over March, April, and May. In a statement regarding the candidates' request, Representative Debbie Wasserman Schultz, chairwoman of the Democratic National Committee, stressed the importance of allowing adequate time for candidates to connect to their audiences:

We have consistently worked with our campaigns to ensure a schedule that is both robust and allows our candidates to engage with voters in a variety of ways, whether through debates, forums or town halls, while also leaving them the flexibility to attend county fairs and living room conversations for the direct voter contact that matters so much in the early states.

There are still some components of the new schedule that need to be teased out. In particular, Bernie Sanders will not guarantee his involvement in the four new debates until each of them is officially approved and scheduled. In a statement made Saturday, his campaign manager Jeff Weaver attributed the inadequacies of the original debate schedule to Hillary Clinton's initial refusal to participate in a greater number of debates, and he suggests that the DNC is catering to her individual requests:

After refusing for months to participate in more debates, Secretary Clinton requested that the Democratic National Committee rules be changed and that a new debate take place in New Hampshire next week. We agreed pending an agreement on three future debates in March, April and May. Unfortunately, the Clinton campaign has not accepted debates we proposed on March 3 in Michigan and April 14 in New York. They apparently agreed to May 24 in California. The Clinton campaign, after not accepting Michigan, now says they want it. We are pleased to do it on March 3 before the Michigan primary provided the Clinton campaign will agree to Brooklyn, New York, on April 14. Why won't they debate in Brooklyn? What's the matter with Brooklyn?

We are prepared to show up for a debate next Thursday and for three additional debates in the months ahead, which we can all work together to schedule. We hope Senator Sanders will be there too. If the Sanders campaign decides to reject the debate next week, we’ll let them answer to the voters of New Hampshire.

If the four debates are officially added to the Democratic candidates' schedule, Sanders wants to ensure that he, as well as Clinton, have an equally important say in the matter.