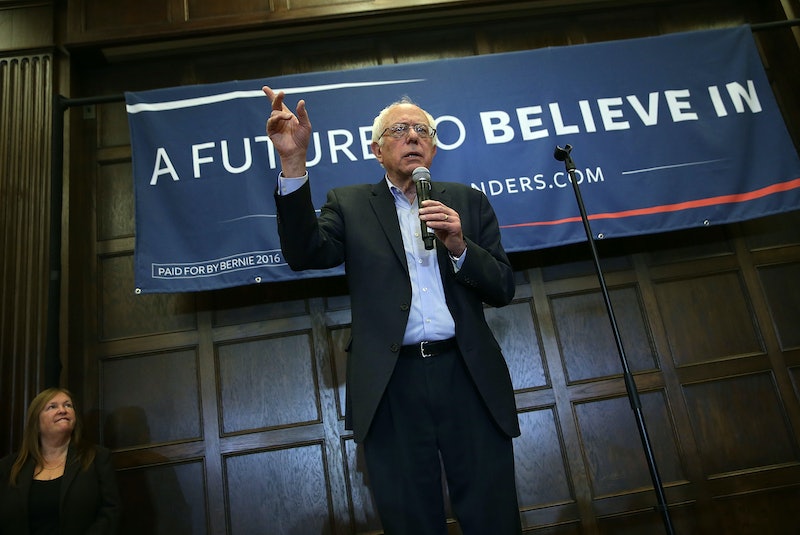 As Bernie Sanders, the 74-year-old senator from Vermont, entered the 2016 presidential field as a self-proclaimed socialist, he was instantly labeled an outsider. With radical, left-leaning political views (like a belief in free healthcare and free college), Sanders promised voters that he would champion the rights of underrepresented and lower-income people across the U.S. Only a few percentage points have separated Sanders and Hillary Clinton throughout the race to the Iowa caucuses. In a last-minute effort to persuade voters, Sanders recalled President Obama's 2008 victory as a parallel to his projected victory at the 2016 caucuses on February 1.

At 6 p.m. on the evening before the caucuses, Sanders addressed a crowd of 1,700 supporters inside the Grand View University basketball court. The event was the final rally for the Sanders campaign before the caucus results are released. Barack Obama was considered unlikely to win when he ran in 2008; by reminding Iowa voters of when they voted for Obama as the Democratic nominee, Sanders strategically boosted his campaign by acknowledging himself as another longshot candidate who was deserving of the party's support.

Throughout his campaign, Sanders has appealed to students and young voters, much like Obama during his time at the caucuses. Although many have viewed Sanders as an outsider — especially compared to Hillary Clinton — this recent strategy of reminding Iowa how they previously made history with Obama could put him ahead as the nominee.

Moreover, in making a parallel between his campaign and Obama's Iowa victory, Sanders also reminded Iowa voters of Clinton's previous unexpected defeat in their state. Yahoo! Politics reported its expectation for a similar upset this year, as the 2016 democratic socialist could defeat his counterpart.

Obama was just a senator from Illinois when he asked Iowa voters for support in the 2008 caucuses; trying to win over a state whose population is 92 percent white was unexpected for an African-American candidate at the time. Sanders recalled this unforeseen victory at his final rally, and touched on a similar theme of hope for the future:

Eight years ago a young United States senator came here to campaign. What people were saying is, Iowa is a virtually all-white state and this black guy doesn’t have a chance. But what the people of Iowa did is say, ‘Hey we’re going to judge this guy not by the color of his skin but by his ideas and character.’ And you allowed Barack Obama to win the caucus.

After addressing his supporters for nearly an hour, Sanders made sure to summarize his ideas for the crowd, once again reminding them of what he hopes to accomplish if elected president. From things like paid maternity leave to reducing carbon emissions to, of course, providing free healthcare for everyone in the U.S., Sanders maintained his Democratic socialist views on issues that matter to his supporters — issues that Obama has tried to reform in his presidency.

During his 2008 victory speech at the Iowa caucuses, Obama addressed subjects that are relevant to Sanders, such as his opposition to the idea that wealth wins over voters. After an unanticipated win, Obama criticized candidates who thought their money would secure them a victory:

You said the time has come to tell the lobbyists who think their money and their influence speak louder than our voices that they don't own this government — we do. And we are here to take it back.

Sanders echoed this almost exactly in his final rally on Jan. 31, assuring his supporters that he is nothing like the wealthy GOP candidates with parochial views of what the American people want and need. Sanders made it clear that a vote for him was a vote for a hopeful, more democratic future:

It is us coming together as a people to tell the billionaire class they cannot and will not have it all.

The parallel between Obama and Sanders becomes clearer when you realize that the two politicians hold similar views on fixing a system that favors the rich. As the 2016 outsider who has been just a few points behind Clinton, it was strategic for Sanders to remind his supporters of Obama's unexpected yet incredible victory at the Iowa caucuses eight years ago. Perhaps Sanders will pull off an unforeseen upset of his own, especially if Iowans want to make history yet again.