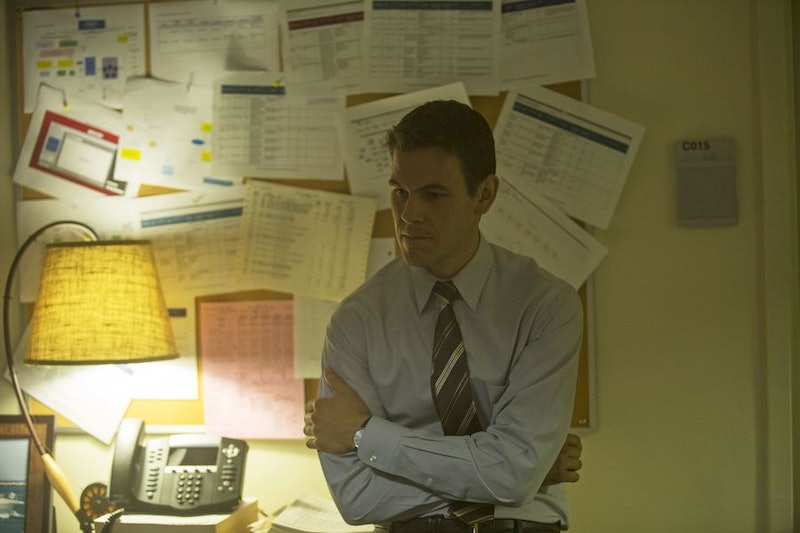 While Bernie Madoff continues to serve his 150-year prison sentence for perpetrating one of history's largest Ponzi schemes, ABC will air a miniseries, titled Madoff, about the man (played by Richard Dreyfuss). The series will also include portrayals of Madoff's family members, like his wife Ruth (played by Blythe Danner) and his two sons, Andrew and Mark (played by Danny Deferrari and Tom Lipinski respectively). But will Madoff include the sad story of Mark Madoff's 2010 suicide, which occurred on the two-year anniversary of his father's arrest?

A synopsis for Madoff, which airs for four hours over two nights on Feb. 3 and Feb. 4, was previously released by ABC, but there's been no official word on whether or not the tragic circumstances surrounding Mark's death would be included. When asked about the accuracy of the miniseries, a spokesperson for ABC made this statement to Bustle:

The only person who definitively knows what really happened is sitting in prison in North Carolina — Bernie Madoff himself. Madoff is a scripted piece of fiction based on truth, inspired by reporting on the crime and on ABC News Chief Investigative Correspondent Brian Ross’ book, The Madoff Chronicles.

Mark committed suicide when he was 46, and was survived by his parents, his brother Andrew (who later died of Lymphoma in 2014, at the age of 48), his four children, and his second wife, Stephanie Mikesell Madoff. His wife now goes by Stephanie Mack to distance herself from the Madoff name. She told the magazine in 2012, "It just sucked to, like, pick up a prescription at the pharmacy and have someone say something ... I don't feel ashamed anymore, but I don't want to have to hear it."

Based on the photos released by ABC for Madoff, Mark will be a pivotal character in the miniseries, even if his death isn't shown ― which, out of respect for his family, might be the best idea. The miniseries is based on the book The Madoff Chronicles: Inside the Secret World of Bernie and Ruth, which was written by ABC News chief investigative correspondent Brian Ross and was first published in 2009, before Mark's death.

In 2015, a few months after Andrew's death, Bernie wrote an email to CNBC from federal prison, describing the pain of losing both his sons, who had ceased contact with him after turning him in to the authorities in 2008.

"As difficult as it is for me to live with the pain I have inflicted on so many, there is nothing to compare with the degree of pain I endure with the loss of my sons Mark and Andy," Madoff wrote in his email. "I live with the knowledge that they never forgave me for betraying their love and trust."

More like this
'Line Of Duty’s Jed Mercurio Has A New Crime Drama In The Works
By El Hunt
Jeffrey Dahmer’s Arresting Officer John Balcerzak Got His Job Back After Being Fired
By Grace Wehniainen
Gabby Petito’s Family Responded To The New Lifetime Movie About Her Final Days
By Grace Wehniainen
Where Is Lionel Dahmer Today? Jeffrey Dahmer’s Father Reflected On The Serial Killer’s Death In 2020
By Brad Witter
Get Even More From Bustle — Sign Up For The Newsletter