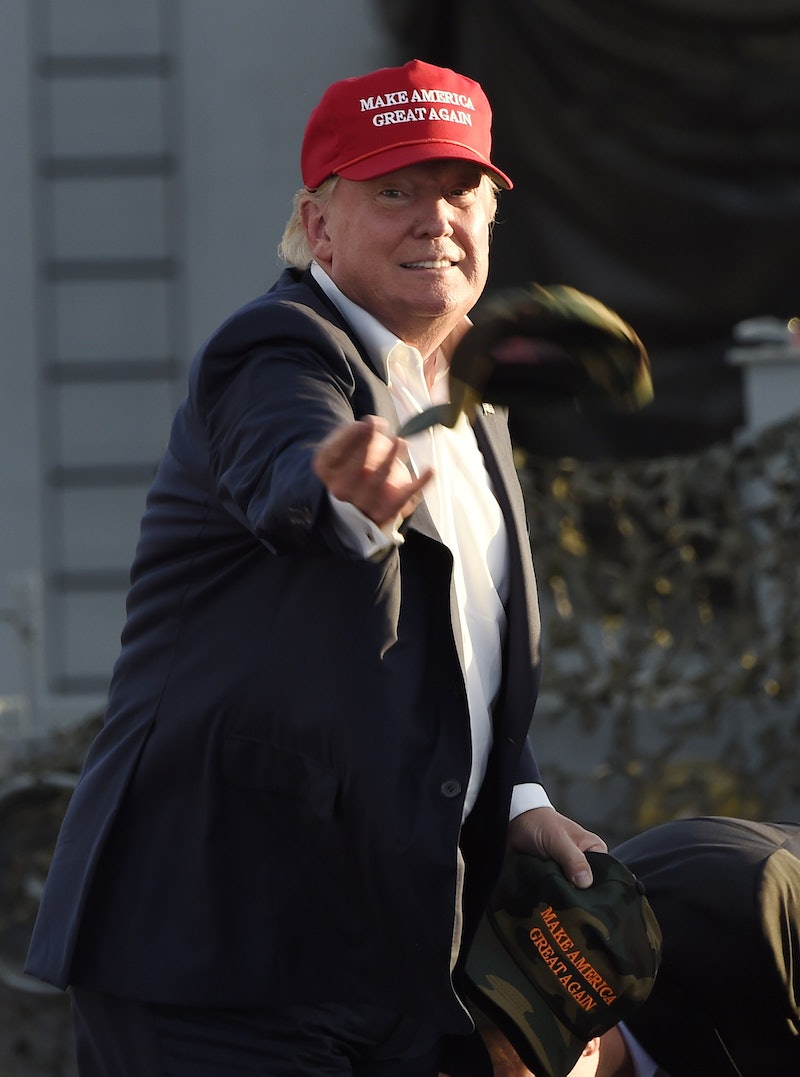 Based on his campaign's spending record, Donald Trump loves his "Make America Great Again" hats even more than hipsters in search of ironic accessories. Trump's campaign spent approximately $450,000 on haberdashery alone in the final quarter of 2015. Hours before the Iowa caucus, the GOP frontrunner filed a report with the Federal Election Committee, detailing how his campaign spent $6.9 million in the final three months of the year. Of the many, shall we say, "curious" aspects of Trump's political strategy, he appears to have devoted nearly 7 percent of that spending to hats. That amount is even more noteworthy considering it's more than the $281,000 the Trump campaign spent on strategy consulting, and rivals the $518,000 spent on payroll during that quarter.

While the Trump campaign's website does offer a variety of headgear options (perhaps a supporter wants a "Make America Great Again" visor when visiting Trump's financial failure of a golf course in Scotland), Trump's hat of choice on the trail is undoubtedly the "Make America Great Again" baseball cap. Generally, Trump goes for the basic red — a jarring stylistic choice against his orange-tinted day-old cotton candy mop. However, when he is feeling especially patriotic, the orange/camo combination is an option.

The "Make America Great Again" hats have easily become the most ubiquitous campaign goodie of the 2016 presidential election, stealing thunder from even Jeb Bush's Guaca Bowle and Hillary Clinton's Chillary Clinton beer koozie. Just as those items appeared to be attempts to win over those candidates' long-sought white whale voting groups (Latinos and millennials, respectively), Trump's "Make America Great Again" hats initially came off as a cloying effort to appeal to conservative blue-collar Americans. Trump even ripped off the slogan from GOP deity Ronald Reagan and his presidential campaign (though Trump is the one who actually trademarked it).

Ironically, there is a group that could not be farther way from this "real" Republican America which loves these Trump hats, albeit in their own way. The New York Times reported in September that the garish hats were appealing to young liberal Americans who had absolutely no intention of supporting an anti-immigration, xenophobic, sexist candidate. They didn't mind effectively donating $25 ($30 if you want the camo) to Trump's campaign for one of the hats. "I'm at a loss to describe the ironic charm of the hats," Nu Wexler of Twitter told The Times. “It’s a huge hat that looks like something you’d wear at a golf club in South Florida in the ’80s.”

For campaign wonks, the most fascinating reveal in Trump's FEC filing is not the relatively exorbitant amount spent on hats, but how little money Trump has raised. Outside donors account for only a little more than $6 million of Trump's campaign funds. In comparison, Texas Sen. Ted Cruz raised $20 million, and Dr. Ben Carson raised $23 million in the closing quarter of 2015. Trump's own money makes up the lion's share of his campaign chest. Then again, Trump also spends significantly less than his GOP rivals and is still leading in Iowa, with 31 percent of polled voter support. Maybe there is something about the hats.