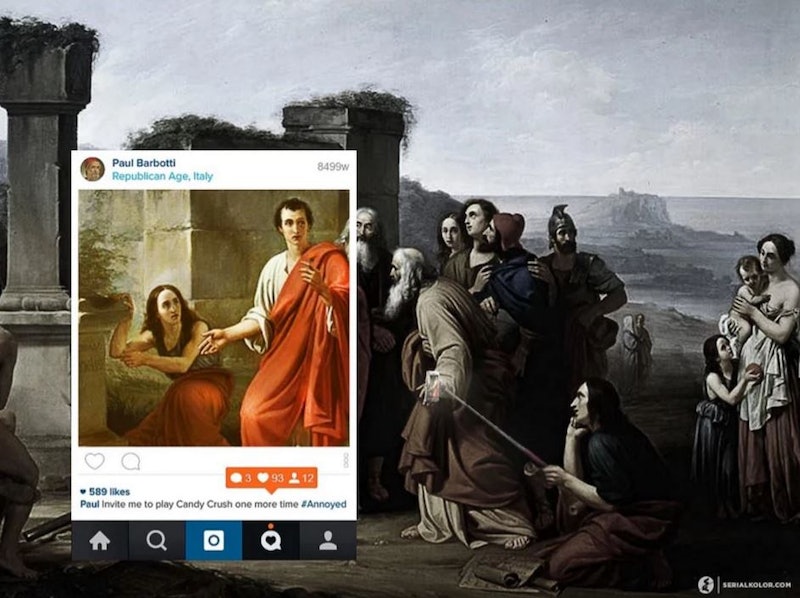 If you've ever wondered what the stoic people in classical paintings may be considering, creative agency Serial Kolor may just have tapped into the historical subjects' psyche. The agency's artists reimagined famous works of art as Instagram posts, turning the subjects into hashtagging, Candy-Crush-hating selfie aficionados. Now they're just like us!

According to the Pakistan-based creatives, the tongue-in-cheek series was inspired by the whimsical desire to view historical characters in a modern context. "We at Serial Kolor are a creative agency, operating on interdisciplinary levels. We are passionate about telling stories through integrating compelling designs, motion, and sometimes live action," the artists explain to Bustle via email. "How about we examine a percentage of the famous canvasses from the times passed by, and remember them in the light they ought to have been initially seen?"

It goes without saying that the technology featured in this cheeky project is entirely anachronistic, but therein lies the humor — these historical characters may not have had Insta accounts, but the fact that Serial Kolor was able to pull off the notion so seamlessly makes you think that the vintage subjects were silently dreaming of a society in which they could become their authentic selfie-snapping selves.

Such seamlessness is also clearly a testament to the impressive abilities of the artists. Not only did they think up these interpretations, but they also managed to execute them so well that we all obviously want to follow these fictional Instas ASAP. "We chose a couple of renowned vintage Greek artistic creations and modified them with inscriptions and hashtags. We made it as if the first craftsman transferred those a very long time prior. Much attention has also been paid to the details of each reinterpretation — the social media snapshots have retained their color, while the rest of the canvases have faded, and time stamps like '8134w' have been included to reflect each artwork's creation more than 150 years ago."

So if you need a pick-me-up to get through your afternoon slump, keep scrolling for a unique glimpse at what classic Greek art subjects were really thinking all those years ago.

History has it wrong — Republican orator Cicero isn't shocked over discovering the tomb of Archimedes. He's appalled that anyone has the gall to keep sending him Candy Crush requests (and also possibly annoyed that one dude has a selfie stick and he doesn't). We know your pain, Cicero. WE KNOW YOUR PAIN.

In Peter Paul Rubens' circa-1638 oil on canvas "The Judgement of Paris," Mercury's golden apple gets swapped for a smartphone. Who knows — perhaps the Trojan War could have been avoided entirely if Paris had, indeed, been perfecting his duckface, as opposed to holding the first-ever beauty pageant.

"You're My Favorite Bitch"

In the original "Roman Carnival" by Orlov Pimen Nikitich, this bloke is holding what could actually be a circa-1859 blunt. If he really did have an Insta today, it might look a lot like the hipster feed of a Russian expat living in Colorado selling hand-blown glass and smoking cigarillos. We'd know, because we'd obviously be following his feed.