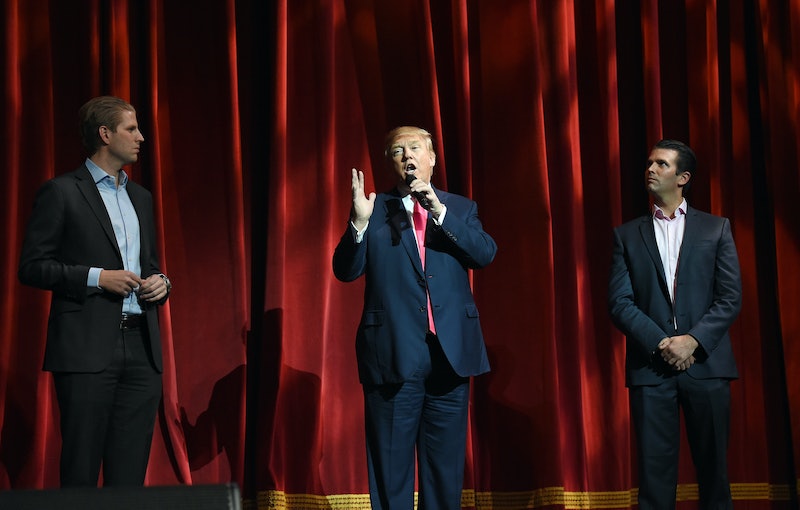 By the look of their Twitter accounts, it appears that Donald Trump's sons, Eric and Donald Jr., have been about as busy as their father leading up to the Iowa caucuses on Monday. Trump's sons joined him in Iowa last Thursday for his Veterans Rally, which was held during the Republican debate, which he boycotted over his feud with Fox News' Megyn Kelly. Donald Jr. and Eric plugged the event on Twitter, sharing a link for donations, boasting about the size of the crowd, and updating social media on how much money was raised for veterans — over $6 million.

Eric, a 32-year-old businessman, and Donald Jr., a 38-year-old businessman, joined Greg Chance on KISS 107.5 for an interview on Jan. 29. They then went to an open field with a few CNN reporters for a pheasant hunting session. Donald Trump doesn't hunt, but his sons are eager to show that they aren't just big-city boys; while spending their childhood summers with their maternal grandfather in what was then Czechoslovakia, the two enjoyed plenty of outdoor time, and learned how to hunt. Donald Jr. also took part in Gov. Terry Branstad’s annual deer hunt on Jan. 9 in Iowa.

On Jan. 30, the Trump boys took a couple of photo opportunities with a police officer and the mayor in Boone, Iowa, then got some time in at the shooting range at Crossroads Shooting Sports in Johnston. Then on Sunday, Eric and Donald Jr. were interviewed by CNN.

Donald Jr. touted his dad's "35-year track record of success" that his companies attest to, and Eric said his father's business experience will be relevant in the White House. The boys also attended the Snowflake Garden Brunch on Sunday in honor of Blue Star Families, a nonprofit that works to support military families. There, they met former Sec. Hillary Clinton, who tweeted that the Trump sons are "charming, engaging and smart."

Caucus day for Donald Jr. and Eric kicked off early with an interview on Good Morning America, during which they said their father is "tough" but "fair" and expressed confidence in his ability to take Iowa on Monday. "People have just embraced us so much," said Donald Jr. of their Iowa trip, "and it means so much when you see that kind of enthusiasm."

Trump has a narrow lead in Iowa of just under five points, according to the most recent polls. Monday night will reveal whether that enthusiasm shows up at the caucuses.