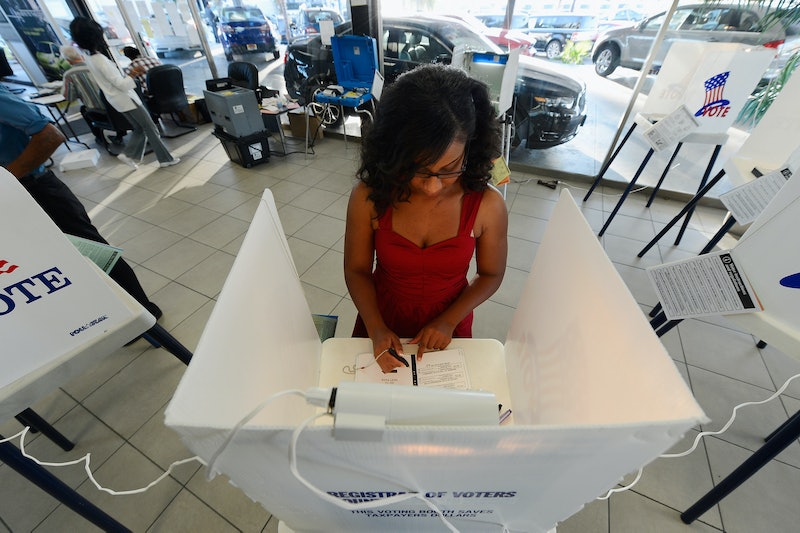 There's been a lot of talk about the Iowa caucuses lately, and about why the event is so important for presidential hopefuls. However, for many people, it remains a mystery why a state like Iowa, with a relatively low population of so little diversity wields, so much political power. The Midwestern state has an alarmingly homogeneous population: 92 percent of its residents are white. If one wanted to better represent the general population of the U.S. in terms of racial demographics, then California would be a better caucus state than Iowa.

The history behind how Iowa became the leading primary conference in the country is complex. As The Washington Post reports, there were unexpected scheduling conflicts back in 1972, so Iowa shuffled its state convention, which usually happened in June. This forced the caucuses to be pushed to January, because the state convention took place after the caucuses and there had to be a certain amount of time between them. After the scheduling shifts, the Iowa caucuses came before the New Hampshire primaries in the early '70s, and cemented their place for years to come.

But history aside, when minorities make up a mere 8 percent of the population in Iowa, it's slightly confusing how the first delegate-selecting event in the country continues to occur in a state that is hardly representative of our nation's people. According to Time, nonwhites made up 37.9 percent of the overall U.S. population in 2014. With that in mind, California might be a better state to hold the first caucuses, because minorities account for 57.8 percent of its population. While California's demographics are still not necessarily representative of that of the country as a whole, in a way, it represents the future. By 2040, the U.S. is estimated to be majority-nonwhite for the first time. Currently, half of the people aged five years and younger are nonwhite, according to Time.

Among the top 10 most diverse large metropolitan areas in the U.S., four are located in California: San Jose, Oakland, Orange County, and San Francisco. Of these, Forbes reports that San Jose is the most diverse large metro, with a 65 percent minority population. Among the more than one million residents of San Jose, 31 percent are Asian and 28 percent are Hispanic. These four California areas boast diverse demographics, which could serve our presidential elections well if the caucuses were held there, because underrepresented communities could have better representation in politics. (Members of congress are over 80 percent male, about 80 percent white, and average around 60 years old.) There's no guarantee that the majority of the state would vote, but bringing the nation's first caucuses of the year to California might encourage residents to ensure that the voices of their heterogeneous communities would be heard in national politics.

Although California has been considered a Democratic state, even their Republicans have expressed their disdain for Republican frontrunners Donald Trump and Ted Cruz. During the last GOP debate, as candidates John Kasich and Jeb Bush talked about supporting immigrants and embracing marginalized groups, California Republicans rejoiced.

Yes, Iowa is a decidedly "purple" state, meaning it has near-equal representation of Democrats and Republicans, which allows for more fairness in elections. However, despite California's current left-leaning population, the state was ruled by Republicans from 1952 through 1988. Moreover, their Independent voters are almost equally split between voting for Democrats (37 percent) and Republicans (34 percent), so that helps even the political party representation across the state. With an impressively diverse population and Republicans who recognize the demise of their party in having Trump and Cruz as frontrunners, California would be a great alternative state to host the first caucuses in the country.