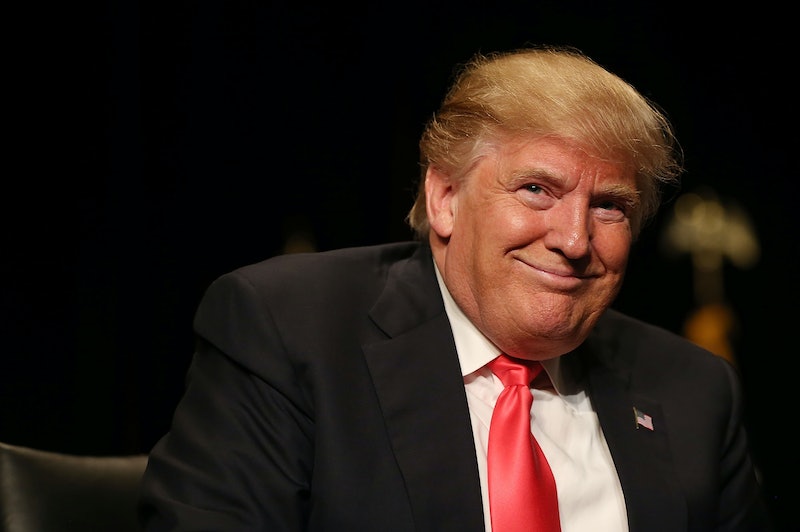 Love him or hate him, there's no denying that Donald Trump is the most controversial presidential hopeful. As he vies for the 2016 Republican presidential nomination and declares that he will "make America great again," some celebrities are coming forward with their support. Of course, there have been plenty of famous people who have spoken out against the former Apprentice host, but don't worry — he has a fan club, too. Just like his main opponents, like Hillary Clinton and Bernie Sanders, he has famous people in his corner.

Considering the polls show that Trump is doing quite well for himself, it's not that shocking that he has his share of celeb supporters. But at the same time, some of the names on this list may take you by surprise. Take Kid Rock, for instance, who did an entire Rolling Stone interview voicing his support for Trump:

I'm digging Trump. I feel like a lot of people, whether you're a Democrat or a Republican, feel like if you get Hillary or Bernie, or you get Rubio or Cruz or whoever, there's going to be the same sh*t.

He actually sounds quite passionate about the matter. And he's not the only one! Here's a roundup of Trump's biggest celebrity supporters.

In the aforementioned interview, the "Picture" singer made his thoughts even more clear with several expletives:

Kid Rock also said he genuinely thinks that Trump will get the nomination, although he admitted that he's "not an expert at political science or anything."

Remember Tila Tequila, from MTV's A Shot At Love ? She's been out of the spotlight for a while, but recently reemerged to make her support for Trump known. She made an entire YouTube video about it back in October.

In the video, she included a moment of self-reflection about how she initially judged him for his reality show, before taking a step back:

I looked within myself and realized, "Wow, Tila, you are judging him how people are judging you."

As for why she's a supporter, Tila identifies as "anti-vax" and appreciates Trump's views on vaccines. "Guys, seriously. Wake up, open your eyes. Trump is the man," she insists.

Boxing champ Mike Tyson has endorsed Trump on numerous occasions. In October, he told HuffPost Live, "He should be president of the United States." By way of explanation, Tyson said:

Let's try something new. Let's run America like a business, where no colors matter. Whoever can do the job, gets the job.

Even after Trump's comments about Muslims, Tyson was still in his corner. He told TMZ in December, "Hey listen, anybody that was ever President of the United States offended some group of people. He deserves a chance."

Just how much does Hulk Hogan support Donald Trump? So much so that he wants to be his running mate. In August, TMZ asked the former wrestler which candidate he'd like to be up against in the ring. He replied:

I don't want to be in the ring with any candidates. I want to be Trump's running mate.

He even insisted that "Vice President Hogan" had a nice ring to it. Honestly, it's not the worst idea I've ever heard.

Stephen Baldwin has appeared on multiple seasons of The Celebrity Apprentice, so he and Trump go way back. "Well, he fired me twice," Baldwin jokingly told CNN in July 2015. "But I think he's fantastic." The Flintstones actor admitted that he thinks Trump would make a great president because he's not a politician. "That's why he's surging in the polls. He's saying what he thinks," Baldwin said, acknowledging that Trump doesn't always say the right thing, but still gets people talking about issues.

Back in July, Rodman expressed his support for Trump on social media. The basketball-player-turned-actor tweeted about his friend, and why he's the right fit:

Similarly to Kid Rock and Tyson, Rodman emphasized Trump's business background as a plus.

Quite frankly, I'm confused about how Charlie Sheen really feels about Trump. First he's calling the candidate a "shame pile of idiocy," and then the next month, he wants to be his VP.

Given the second tweet's more recent timestamp, I guess that chalks him up as a supporter. Plus, that #TrumpSheen16 hashtag sounds pretty serious — it even rhymes.

Late Monday night on Twitter, Azealia Banks revealed that she plans to vote for Trump. Just in case you think that means she thinks he's a good guy, nope, that's not the case at all. Instead, she just thinks he's the most transparent, and the kind of evil that America needs. Here are a few highlights:

Admittedly, I'm a bit puzzled by all of this. But when she received a bunch of backlash in response to the tweets, Banks stood her ground. Props to her for that.

As the election gets closer, more celebrities may come out of the woodwork and show their support. Only time will tell who endorses whom!

More like this
Camilla Paid Tribute To The Queen In A Heartfelt Video Message
By El Hunt and Sam Ramsden
Here’s Everything You Need To Know About Operation London Bridge
By Bustle UK
Confusion Reigns After Kanye Changes His Instagram Profile Pic To Kris Jenner
By Jake Viswanath
The Try Guys Cheating Scandal, Explained
By Grace Wehniainen
Get Even More From Bustle — Sign Up For The Newsletter