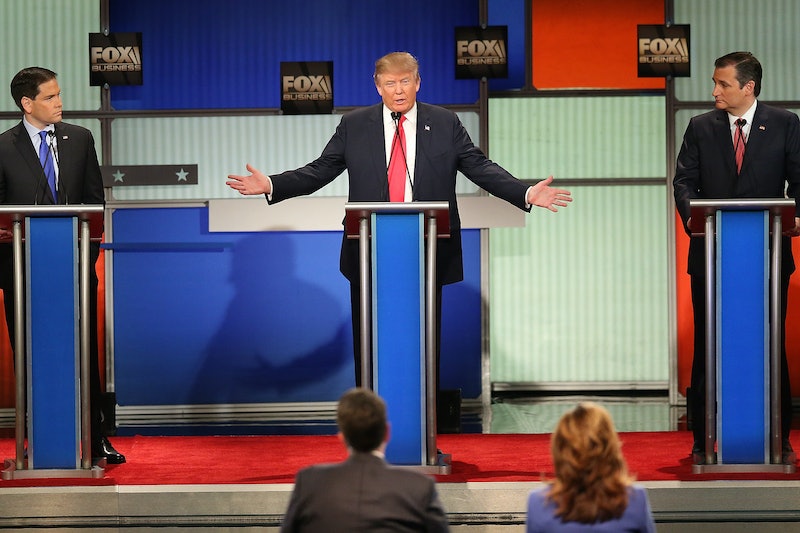 There is no shortage of hype surrounding the Iowa caucuses on Monday, which began at 7 p.m. CT. And there's good reason for that: This is the first time in the 2016 presidential race that we will have something other than polls with which to measure where voters' loyalties lie. And as the first primary in the nation, it has the potential to spark momentum within the campaigns that perform well. Though we have reason to be paying attention, there's no need to get stressed out about who does or does not win on Monday, especially on the Republican side — few GOP candidates who won the Iowa caucuses have gone on to secure their party's nomination for the general election.

In fact, The Des Moines Register reported that Republican winners of the Iowa caucuses have only gone on to win their party's nomination twice out of the six races that have taken place since 1980. What is more, only one of those Iowa winners went on to win the presidential election. Taking a look at the past Republican winners of the Iowa caucuses can give us some insight into just how unpredictable the race will remain after Monday's votes are in.

Sen. Bob Dole won the Iowa caucuses by a sizable margin, getting 37.4 percent of the votes, compared to second-place candidate Pat Robertson's 24.6 percent. The candidate who actually got the nomination — George H.W. Bush — came in third, with a paltry 18.6 percent.

This time, Dole did indeed go on to secure his party's nomination, after beating his closest competition in Iowa, Pat Buchanan, by 3 percent. He lost to incumbent President Bill Clinton in the final race.

The Iowa caucuses of 2000 saw Texas Gov. George W. Bush take a strong lead of 10.5 percent over his best competition in the state, Steve Forbes. He went on, as we haven't likely forgotten, to win both the Republican nomination and the presidency.

Arkansas Gov. Mike Huckabee took Iowa in 2008, with 34.4 percent of the vote. Sen. John McCain, who became the Republican party's presidential nominee, only garnered 13.1 percent of votes. He was barely in fourth place, behind Sen. Fred D. Thompson by only 0.2 percent.

Though Mitt Romney became the Republican nominee in 2012, Rick Santorum won the Iowa caucuses — just barely. Both candidates came in at 24.6 percent, with Santorum winning by only 34 votes.

Perhaps a more important thing to look for than the winner on Monday night is the top three candidates. From the data above, you'll see that only once since 1980 has a candidate who came in below third place in the Iowa caucuses eventually won the party nomination, and that was John McCain, who missed out on that placement by a very small margin. Averages of recent polls show Donald Trump, Sen. Ted Cruz, and Sen. Marco Rubio in first, second, and third, respectively. Rubio is averaging 16.9 percent compared to Ben Carson, who sits in fourth place a full 9 percent behind him.

The Iowa caucuses are worth paying attention to, but there's no need to freak out about Monday's results. It's not anyone's game at this point, but there is time for the tables to turn in the Republican race.