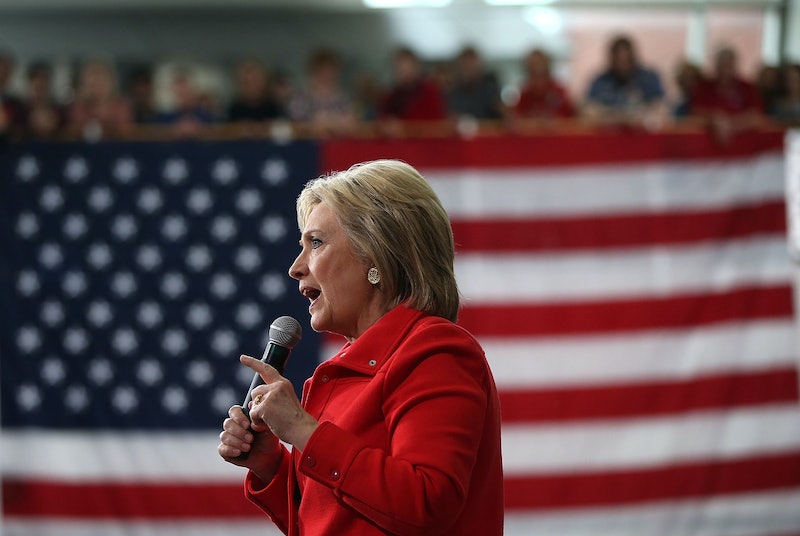 Hillary Clinton has a lot riding on Monday night's Iowa caucus. Once seen as the inevitable Democratic presidential nominee, the former Secretary of State's once-steady polling has been slipping as the country has moved into this first major contest of the 2016 election. Polls predicting the evening's outcome have placed her nearly neck-and-neck with Bernie Sanders. As such, her campaign has gotten that much more aggressive in recent weeks. Clinton knows that the Iowa caucuses could cause a drastic shift in her campaigning, and has urged voters to act accordingly.

National polling data shows Clinton with only a slight edge over Sanders, with the average figure between them being a four-point lead. For months following her announcement as a candidate, Clinton enjoyed a substantial edge over all of her opponents. But as voters have gotten to know Sanders better, her campaign has started to see an all-too-familiar downward trend — one that very much mirrors her 2008 decline and eventual defeat by Barack Obama. Clinton knows that without a dedicated turnout from her supporters, this caucus may very well put her on track for a similar outcome.

Clinton's comment on voters' ability to make history is an important one — by slating herself as the historic candidate, she again gives herself a needed edge over the male Sanders. In this way, Clinton's campaign revolves around making history, a factual but bold statement that shows she is willing to use all her cards in the race for Iowa.

Though when asked a few weeks ago about Sanders' boost in the Iowa polls, Clinton told The Today Show: "I'm not nervous at all. I'm working hard, and I intend to keep working as hard as I can until the last vote or caucus-goer expresses an opinion. I'm excited about where we are." Her actions, however, tell a different story.

The generally amiable relationship between Clinton and Sanders has become more tense as the primary elections have drawn closer. Having all but ignored the senator throughout the race, Clinton's team released a series of attack ads against Sanders and his healthcare plan in mid-January. The result of the ads, however, had quite the opposite effect of what her team most likely intended — according to the Sanders camp, financial contributions to their campaign began coming in at four times the previous average rate since they were released.

These shifting strategies show that, despite what Clinton says, she understands the strength in Sanders' campaign, and what she now has to lose going up against it. Her outward confidence but internal change in direction demonstrates that she does not want a repeat of 2008, and will drum up all the support she can to maintain her lead.