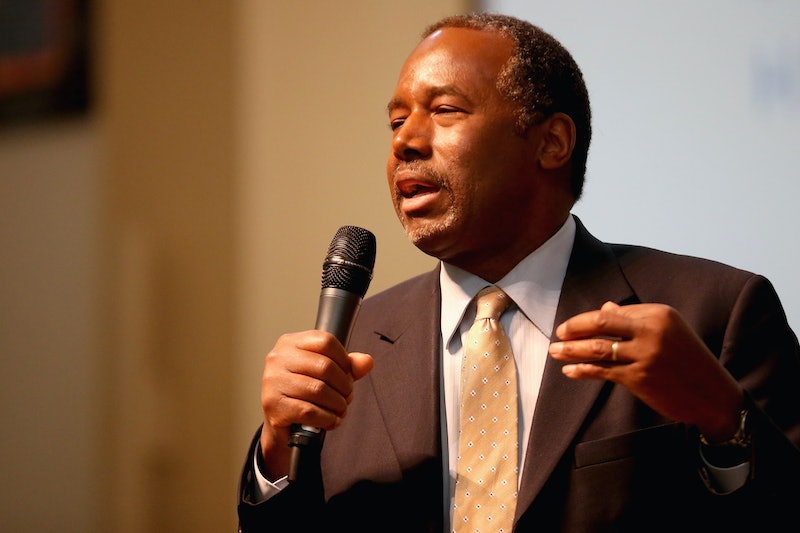 In what could easily rank as one of the most hilarious moments in U.S. political history, Republican presidential nominee Dr. Ben Carson has temporarily abandoned the campaign trail in Iowa to do laundry. According to Carson's senior communications strategist, the man simply requires fresh clothes. Well, at least that's what his strategist keeps saying. Apparently — and more reasonably — Carson also wants to see his family. Both the correspondent Jason Osborne and senior reporter for CNN Politics Chris Moody explain that Dr. Carson will return to the proverbial trail by Wednesday. That's a relief — and he'll have fresh clothes to boot!

Although Carson is deserting at arguably the most crucial time to date, since the Iowa caucuses are a pretty big deal, he is sticking around long enough to speak to Clive precinct in Iowa and apply for their vote. Shortly thereafter, he is leaving on a jet plane bound for Florida.

This isn't the first time Dr. Carson has chosen an unusual hour or reason to leave the trail. Back in October 2015, he took some time away to eat some pancakes. It was rumored he was also promoting his book, A More Perfect Union, though he claims he in no way halted his campaign to do so. He explained:

You separate it out. You know, I'm not on book tour today, for instance, which is why I'm talking to you.

Some are speculating that this temporary leave means Carson soon plans to abandon the campaign trail, but apparently he's just trying to escape Des Moines before an approaching storm. At present, he is ranking fourth in the Iowa Republican caucus, which is fair considering the vast field of GOP hopefuls who began the race along with him. Carson dropped from his second place lead behind Donald Trump to his current position after a some blunders on the subjects of national security and refugees.

Naturally, according to unspoken Internet decree, an unusual move by a presidential candidate shalt not go unnoticed by the people of Twitter. And, of course, they have had a field day, expressing amusement toward Dr. Carson. I even think Don Henley had a few words on the topic. Plenty of mental images of washers and dryers are appearing, a few floating breakfast foods, some books casually tossed about, and then a long nap — that's what I imagine when I think of Dr. Carson. And honestly, that's how I'd like to remember him: a sleepy neurosurgeon with a proclivity for occasionally decamping to a place with pancakes.