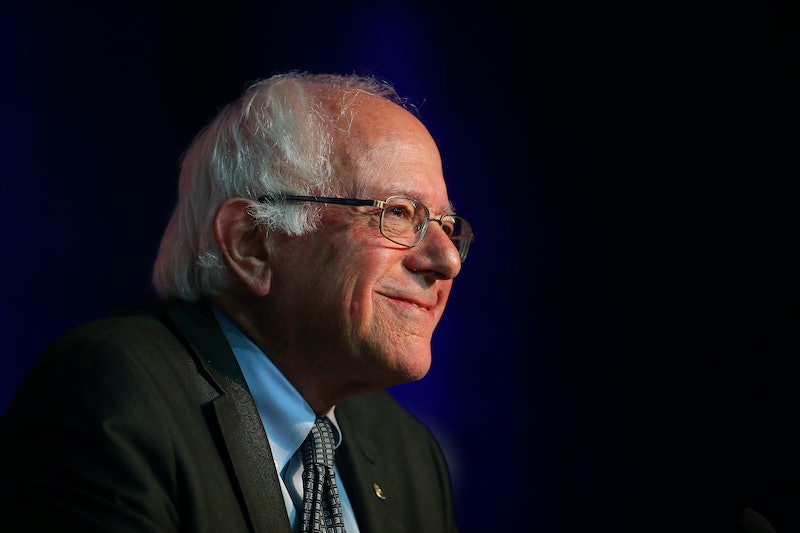 Imagine living in a house divided: a husband and wife, one a Hillary Clinton supporter, the other voting for Martin O'Malley. Both want to stand their ground in favor of their candidate. But surprisingly, during Monday evening's Iowa caucus, this lovers' quarrel helped Sanders gain a new supporter.

Sanders snagged this extra vote after the husband, an O'Malley supporter, deflected from the unpopular camp to instead join forces with the Vermont senator — he did, however, get an extra push from his wife, who insisted that he join the Clinton side along with her. But like any normal husband, he decided to not listen to his wife, and after some back-and-forth between the couple, chose to side with Sanders.

Yahoo News reporter Liz Goodwin captured the exchange in a series of live tweets. At one point, the wife pitched her support of Clinton to her husband with, "She did things as a First Lady!" He shot back, "Everybody does things as a First Lady!" Followed, reportedly, with some awkward silence. Eventually, it looked like the entire West Des Moines caucus site joined in on the argument, with voters from both the Clinton and Sanders sides attempting to sway the lone O'Malley supporter.

Some background: during the Iowa caucus, voters meet in their designated precinct space (often times a church, school, or office building) and physically stand in a section marked off for their chosen candidate. All of this is done publicly — so whereas husband and wife may be able to normally hide their choice for president in a closed ballot, the caucus leaves everything out in the open.

The husband, however, could not stand in the O'Malley section and had to make his decision based around Clinton or Sanders because of a technicality called the "viability rule." In Democratic caucuses, the viability rules requires that each candidate must meet a threshold of 15 percent support. Meaning, 15 percent of all caucus-goers in each given precinct need to stand with O'Malley for him to even be counted as a viable candidate. Because the husband was the lone O'Malley supporter, this rule meant he would need to choose either Sanders or Clinton.

O'Malley's inability to become viable in many precincts, having polled nationally at 3 percent immediately leading up to Iowa, could help either Sanders or Clinton. If they don't go home altogether, O'Malley supporters could flock to either candidate. In the case of the lovers' quarrel, however, it helped Sanders, who ended up taking the precinct altogether.

Sanders surely doesn't want to cause too many spats among couples, but if it could help him win the nomination, maybe we'll be seeing a few more breakups on account of the Senator this Valentine's Day.