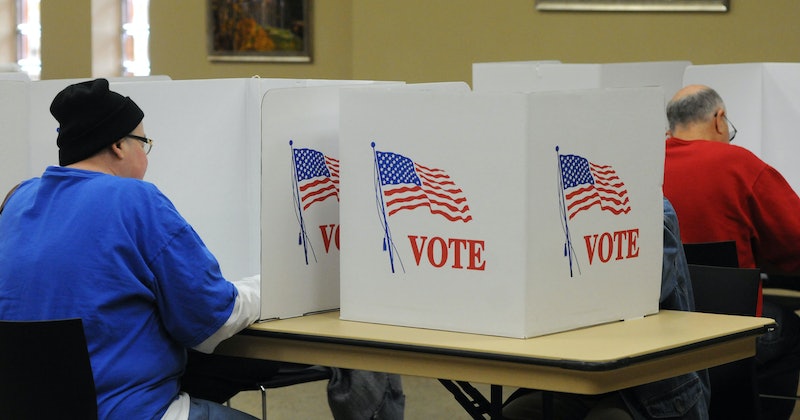 Republican Iowans took to the ballot boxes Monday in the first caucuses of the 2016 presidential race. As the first real indication of who Americans want to be the GOP candidate this year, the Iowa caucus was a huge deal for every single politician trying to become the next leader of the U.S. In the end, Ted Cruz won the Republican Iowa caucus, upsetting Donald Trump's months-long party lead.

Keep in mind that Iowa is only the first caucus, with many more to come, but it can still make or break a candidate's campaign. For Cruz, who won with 28 percent of votes, Monday's win solidifies him as a viable GOP nominee and bumps him up out of Trump's shadow, where he's hovered since the race began. An Iowa caucus victory will allow him to move into the upcoming primaries much stronger than he would have been able to otherwise, and could mean the beginning of the end for all of his Republican opponents who didn't fare so well. While some of the other 11 GOP hopefuls will no doubt begin suspending or ending their campaigns following their disappointing losses in Iowa (beginning with Mike Huckabee), Cruz's campaign will ramp up after a big celebration of the long-awaited validation.

Despite Trump maintaining his lead in the GOP field for months, the real estate tycoon finished the caucus in second place, with Marco Rubio trailing closely behind in third and Ben Carson much further behind in fourth. Cruz only beat Trump by a few percentage points, but he pulled through in the end, and won by a much larger margin than the Democratic candidate.

The GOP caucuses saw a record turnout of voters, with ABC News estimating that more than 180,000 Republicans showed up to cast a ballot. Winning in a caucus with a huge turnout proves that Iowans really back Cruz, leaving no room for speculation that Trump or Rubio could have won if more voters hit the ballot boxes Monday.

Cruz's victory was due in part to the state's large evangelical population that could more closely identify with Cruz's social ideologies than Trump's less religious beliefs and background. However, polls of New Hampshire Republicans show that voters there are more socially moderate, and Trump holds a 25 percent lead over Cruz. The Iowa caucuses and New Hampshire primaries usually have different results, so Cruz's victory could be short-lived; nevertheless, winning in Iowa is a huge boost for the Cruz campaign.