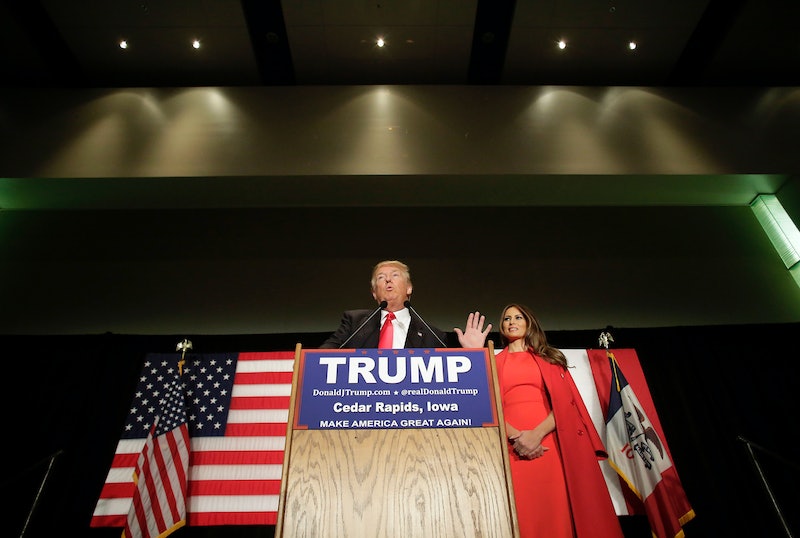 When the tall businessman with the wacky hair decided to skip the GOP debate right before the Iowa caucuses, some said it was a brilliant move. It gave him a press push leading up to the caucus and positioned him as a rule-breaker destined to forge his own path. His fans assured everyone that this would help, not hurt, his chances of winning at the polls come Feb. 1, but, not so much. One can't really argue anymore that ditching the debate was the smartest move. After all, Texas Sen. Ted Cruz has won the Iowa caucus. So what does that make Mr. Make America Great Again? That's right, a hu-uuge lo-oser. And don't you worry, the "Donald Trump loses the Iowa caucus" memes are just as fantastic as you'd hope. Thanks, Internet and savvy Iowans!

It was a tight race, though. The AP reports that Cruz received 28 percent of the vote, with Trump earning 24 percent, and Florida Sen. Marco Rubio shocking many, many, people with a very decent 23 percent. No one was probably more surprised than Trump that Trump was forced to admit defeat. Taking the stage in Iowa, he said, "I want to congratulate Ted, and I want to congratulate all of the incredible candidates."

It was the most shocking event of the night.

Clearly, a Trump loss is something to talk about. To the Interwebs!

People Are Shocked By His Gracious Speech

His Next Big Goal

And Finally, This Guy Sums It Up Pretty Nicely