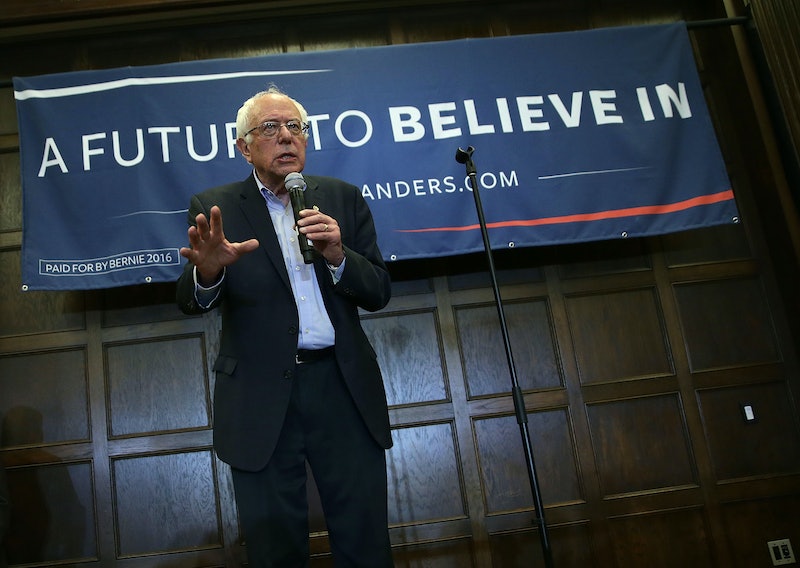 The Iowa caucuses Monday night were extremely close for Democrats Hillary Clinton and Bernie Sanders, and both candidates gave a speech before the final results were in. Although it was virtually a tie, Clinton and Sanders each felt they won and gave a "victory speech." Sanders' speech after the Iowa caucuses was triumphant, yet gracious, congratulating Clinton and supporting O'Malley before jumping into his usual talking points.

Clinton and Sanders were within .03 percent of one another when the Vermont senator took the stage to address his supporters and call Iowa a success. Sanders wasn't too worried about Clinton winning by less than one percentage point, as the two candidates will get the same number of delegates from Iowa. Per usual, he spoke about the need for a political revolution, finance reform, universal healthcare, and environmental protections, but he also addressed his haters and looked forward to the New Hampshire primaries. With nearly 50 percent of Iowa votes, Sanders' confidence got a major boost and he said he expects even more success in New Hampshire. He has a wide lead in the state's polls, with 57 percent of Democrats' votes compared to Clinton's 34 percent. So, he's feeling pretty good.

And while, the results are still not complete, it looks like we'll have about half of the Iowa delegates. I wanna take this opportunity to congratulate Secretary Hillary Clinton and her organization for waging a very vigorous campaign, and I want to thank Governor Martin O'Malley. It's never easy to lose — I've lost more than one campaign, but he should know he contributed a whole lot to the dialogue, that he ran an issue-oriented campaign, and that he won the respect of the American people.

As I think about what happened tonight, I think the people of Iowa have sent a very profound message to the political establishment, to the economic establishment, and by the way, to the media establishment. And that is, given the enormous crises facing our country, it is just too late for establishment politics and establishment economics. What the American people have said — and by the way, I hear this not just from progressive, I hear from conservatives, I hear it from moderates — and that is we can no longer continue to have a corrupt campaign finance system. I am the former chairman of the Senate Veterans Committee, and in that capacity, not only have I worked hard of trying to protect the interest of our veterans ... I've had the privilege of men and women ... and what they were protecting is an American democracy of one person, one vote. not billionaires buying elections. I am overwhelmed and I am moved by the fact that millions of people throughout this country have helped volunteer in our campaign ...

We do not represent the interests of the billionaire class, Wall Street, corporate America. We do not want their money ... We are the only candidate on the Democratic side without a Super PAC. And the reason that we have done so well here in Iowa, the reason I believe we're going to do so well in New Hampshire and the other states that follow, the reason is the American people are saying "no" to a rigged economy. They no longer want to see an economy in which the average American works longer hours for low wages while almost all new income and wealth is going to the top 1 percent.

What the American people understand is this country was based and is based on fairness. It is not fair when the top 1/10th of 1 percent today owns almost as much wealth as the bottom 90 percent. It is not fair when the 20 wealthiest people in this country own more wealth than the bottom half of America. So you guys ready for a radical idea? Well, so is America. And that radical idea is, we are going to create an economy that works for working families not just the billionaire class.

And when millions of our people are working for starvation wages, we are going to raise the minimum wage to $15 an hour. And yes we are going to have pay equity for women. I've been all over this state of Iowa, we have spoken to some 70,000 people and in meeting after meeting, I hear people standing up and they say, Bernie, I went to college. I graduated college, now I am 60, 80, 90 thousand dollars in debt. That is crazy. That is crazy. They want to get a decent education; they should not be punished.

That is why I believe in the year 2016, public colleges and universities should be tuition free. And then my critics say, well, Bernie, that's a great idea, all this free stuff, how are you going to pay for it? I will tell you how we will pay for it, we are going to impose a tax on Wall Street speculation. The greed, the recklessness and the illegal behavior of wall Street drove this economy to its knees. The American people bailed out Wall Street, now it's wall Street's time to help the middle class. And when we talk about transforming America. We will end the disgrace of having more people in jail than any other country. Disproportionately African American and Latino. What we are going to do is provide jobs and education for our kids not more jails and incarceration. I'll tell you something, that really does astound me. I'm on the senate energy committee, on the senate environmental committee, I have talked to scientists all over the world. The debate is over, climate change is real. And we have a moral responsibility to work with countries throughout the world to transform our energy system away from fossil fuel to energy efficiency and sustainable energy.

What amazes me, what totally amazes me, is that we have not one Republican candidate for president prepared to come up and tell us, and agree with what virtually all scientists agree with, and you know why they are not prepared to do that? Because on the day that they do acknowledge the reality of climate change and call for change, you know what happens? They're going to lose their campaign funds from the Koch brothers and the fossil fuel.

So I say to the Republicans, stop worrying about your campaign funds from big oil or the Koch brothers worry about the planet you're going to be leaving your children and your grandchildren. Now, I have been criticized during this campaign for many, many things. Every single day. That's okay. That's OK.

So for all of my critics out there in the Wall Street Journal and the Washington Post and in corporate America, wherever you may be, let me tell you straight up, yes, I believe that health care is a right, not a privilege.

And that is why I believe in a Medicare for all single payer program which will not only guarantee health care to all, it will not only end the pharmaceutical ripoff of the American people but it will save the middle class family, the average middle-class family thousands of dollars a year in health care costs.

Let me conclude by saying what no other candidate for president will tell you. And that is that no president, not Bernie Sanders, not anybody else, will be able to bring about the changes that the working families and the middle class of this country, that our children, that the seniors, our seniors deserve. No one president can do it because the powers that be, wall Street with their endless supply of money, corporate America, the large campaign donors are so powerful that no president can do what has to be done alone. And that is why — and that is why what Iowa has begun tonight is a political revolution.

A political revolution that says when millions of people come together including those who've given up on the political process, they're so dismayed and so frustrated with what goes on in Washington, with young people who before had never been involved in the political process, when young people and working people and seniors begin to stand up and say loudly and clearly, enough is enough, that our government, the government of our great country belongs to all of us and not just a handful of billionaires, when that happens we will transform this country. Thank you all very much.

Essentially tying with Clinton was enough of a victory for Sanders and voters feeling the Bern to celebrate.