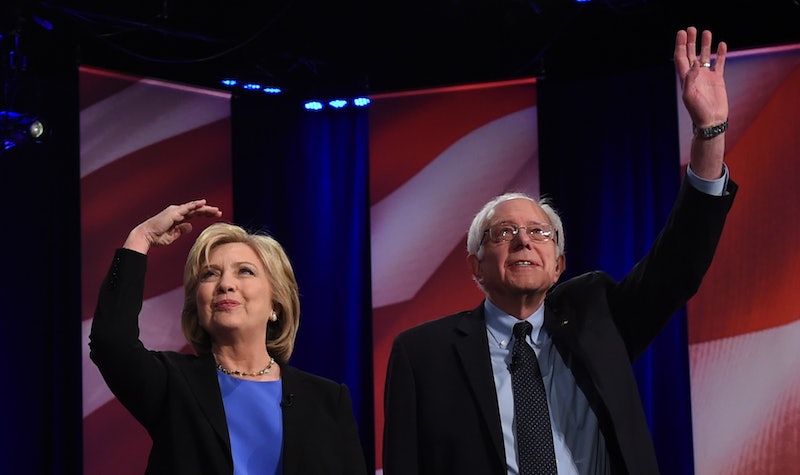 Monday night, Hillary Clinton and Bernie Sanders faced off in the Iowa caucuses — the very first voting event in the 2016 election. The polls had the two Democrats neck and neck leading up to the big day, and the caucus turned out the same way, with a margin of less than 1 percentage point and it virtually ending in a tie. Clinton's and Sanders' speeches after the Iowa caucus both mentioned feminist issues, but somewhat skirted over the topic that they usually go into detail about.

Clinton spoke to her supporters first, essentially declaring her success before the party's official caucus numbers had rolled in. Regardless, her speech touched on all of her major policy goals, including her commitment to achieving gender equality. "And I know we can protect our rights, women's rights, gay rights, voting rights, immigrant rights, worker's rights," Clinton said, failing to mention any specific feminist issues.

Similarly, Sanders briefly mentioned how he wants to help American women, focusing on closing the wage gap. "And when millions of our people are working for starvation wages, we are going to raise the minimum wage to $15 an hour," Sanders said Monday. "And yes we are going to have pay equity for women."

While Clinton only vaguely mentioned women's rights and Sanders only brought up one issue (albeit a pretty big one), it's still reassuring that the candidates included the topic in their speeches. Ted Cruz, who won the Republican Iowa caucuses, didn't mention women's issues at all, only saying: "To the revolutionary understanding that all men and that all women are created equal." It's easy to say everyone is equal, but without actually ensuring that everyone's treated equally, it's an empty statement.

Sanders' promise to establish pay equity and raise the minimum wage (which disproportionately affects women) exemplifies why he did so well in the caucuses — he has stuck by his commitment to revolutionize America's entire finance system, including how much women are paid for their work. Even with so many financial issues to address, Sanders made a point to specifically bring up women's pay among his usual talk about Wall Street, corporate America, and the "billionaire class."

Though there could have been a lot more, Clinton's and Sanders' inclusion of feminist issues in their post-Iowa speeches further solidified how much they differ from Republicans on the matter.