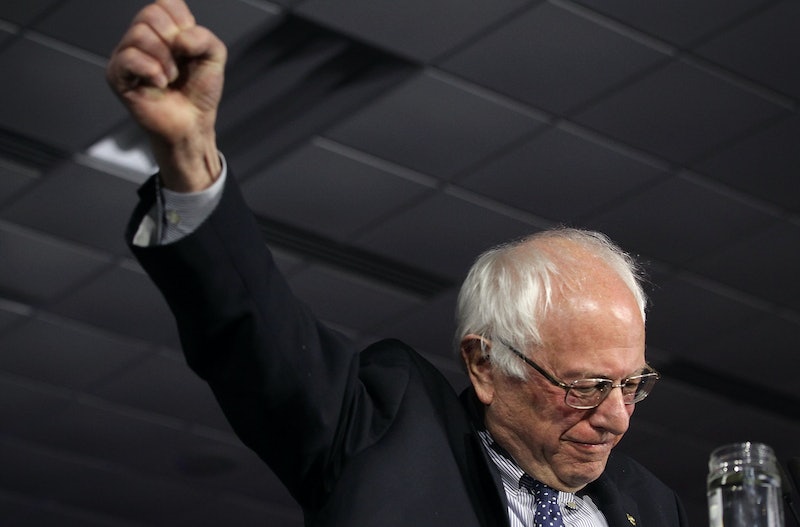 In a speech late Monday night acknowledging his virtual tie with Hillary Clinton, presidential candidate Sen. Bernie Sanders thanked caucus-goers in Iowa for beginning "a political revolution." For voters who are feeling the Bern, the idea isn't new. In fact, if you were to Google "political revolution" you'd come up with a slew of Sanders-related content. Sanders has centered many of his speeches around creating radical change in American politics. In essence, Sanders' call for political revolution is an appeal for disenchanted or disengaged voters to believe that change, although hard, is possible and begins at the polls. But what does Sanders political revolution look like?

Sanders' message of upheaval has found significant support among younger voters, who have previously been criticized for their failure to engage in politics. His plan relies heavily on voter participation. It is, simply stated, a call for participation. In Iowa Monday, Sanders said a political revolution would only happen with the support of the voters, stressing that no presidential candidate, himself included, would be able to stand up to Wall Street or corporate America alone.

The Vermont senator is hoping to bring voters to the polls long after the presidential election in November in order to turn his campaign's agenda into legislation. Speaking at the Iowa Jefferson-Jackson dinner last October, Sanders repeated a much-uttered message of his campaign: His presidential bid isn't about him; it's about forcing change.

What this campaign is about is not just electing a president, it is transforming America. To do that we need millions of people — people who have given up on the political process, people who are demoralized, people who don’t believe that government listens to them. We need to bring those people together to stand up loudly and clearly and to say ‘Enough is enough.’ This country belongs to all of us, not just wealthy campaign donors.

When Sanders says "political revolution," what he means is rotating the balance of power in politics so that the interests of the working class hold more weight in Washington than those of the one percent. Sanders believes that billionaires, big banks, and Wall Street currently have too much say (and sway) in Congress. He's looking to change to a single-payer healthcare system, effectively eliminating private health insurance and funding federally-run healthcare by taxing the wealthy.

Another aspect of Sanders' campaign that falls under his political revolution is his proposal to drop the cost of tuition at public colleges and universities down to a big fat $0. To pay for this, Sanders has proposed taxing Wall Street trades. Other revolutionary ideas from his campaign are to break up banks classified as "too big to fail" and to raise both the monthly Social Security benefits payout and the federal minimum wage. Sanders has also proposed taxing the rich to fund infrastructure and job programs.

Finally, it's notable that, unlike some presidential candidates who seem to think they'll walk into the White House on Day 1 and immediately negate any of President Barack Obama's policies that they don't like with a wave of their pen, Sanders has realistic expectations for his political revolution. He knows the kind of radical change he's advocating for won't happen in a year, and he knows it won't happen without a major support base. "Anybody here who thinks real chance comes easy knows nothing about American history," he told supporters in Mason City, Iowa over the weekend.

With Sanders' virtual tie with Clinton in Iowa, it's clear that his call to action has resonated with more than a few voters and we'll continue to hear the Vermont politician advocate for a political revolution.