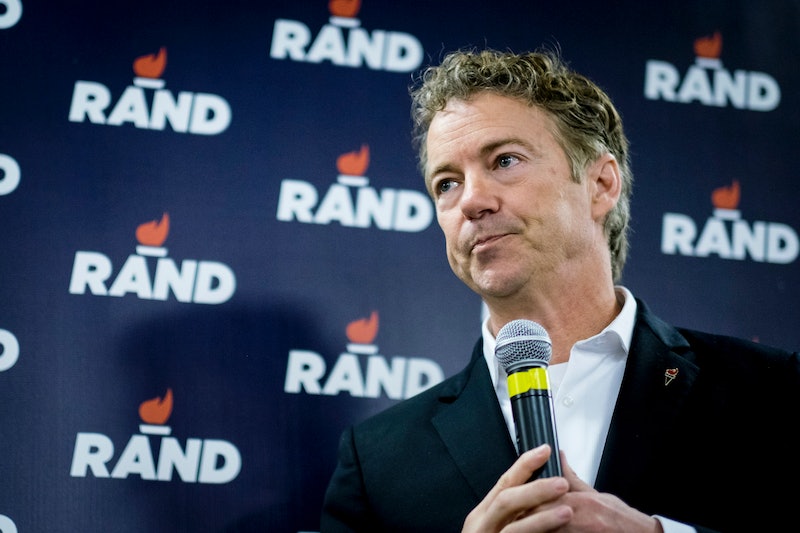 In a speech Monday night, feeding the crowd with energy as opposed to acknowledging his poor showing at the Iowa caucuses, Rand Paul focused on liberty. "Liberty is alive and well in Iowa," he began. Paul finished in fifth place, with about 4.5 percent of the vote Monday in the Republican Iowa Caucus, earning himself one delegate. This was roughly in line with polling leading up to the election. The underwhelming outcome does not bode well for him in New Hampshire, but Paul is staying in the Republican race anyway.

According to The Des Moines Register, the top three finishers have traditionally continued the fight for the nomination, but Paul's chief Iowa strategist told the paper that, given how crowded the Republican field is, the top five should continue on. (Mike Huckabee quickly suspended his campaign as the state's results came in.) In other words, Paul will not be dropping out. Instead, his campaign has called on the GOP and ABC to put him on the stage in the next debate. He did not trail the top four closely. The fourth-place candidate, Ben Carson, had more than double his points, with 9 percent. The top three — Cruz, Trump, and Rubio — were all in the 20s.

This was likely a letdown for the Paul campaign, if not a surprising one. The campaign tried to rebuild the support that the state had shown his father, Ron Paul, a former Texas congressman. In 2012, Ron Paul took third place in the Republican caucus, with a little over 20 percent of the vote. Drawing support as an outsider int he race, he fired up college students. This year, much of that momentum went to Bernie Sanders.

Rand Paul addressed his supporters as if they were the last bulwark against a rising tide of, well something:

In New Hampshire, Paul has done even more poorly than in Iowa. He currently is polling at about 3 percent. Despite that outlook, he put a positive spin on things for supporters:

Against all odds, against a little bit of bias here and there, tonight the liberty movement beat four sitting governors from the establishment. Victor Hugo wrote that ideas are stronger than armies. I think the idea of liberty lives on in you, in us. We will continue to fight. Tonight is the beginning. Liberty will live on. We fight on.

Victor Hugo is the author of Les Misérables. It's unclear whether he would have voted for Paul. Either way, he'll need far more than one dead writer to win the nomination.