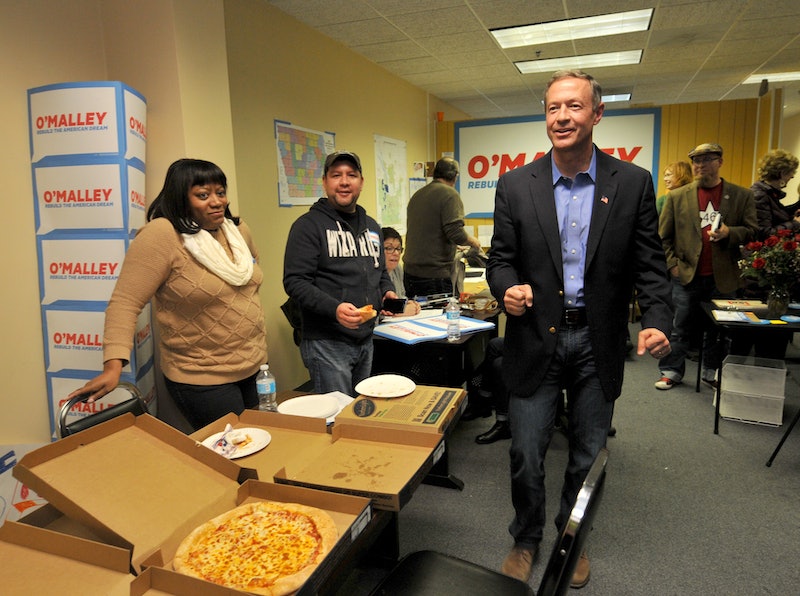 Each year, the Iowa caucuses help determine which candidates have enough support and potential to become the president of the United States. Just hours after the 2016 Iowa caucuses ended, candidates began dropping out of the race. Though they were hanging by mere threads prior to Monday night, the results represented the final straw for Democrat Martin O'Malley and Republican Mike Huckabee.

Leading up to the caucus, Iowa polls placed O'Malley in last place, at 4.3 percent, but his support then dipped even further, falling 3.7 points in the actual event. With less than one percentage point of support in Iowa, O'Malley announced that he is suspending his campaign during a speech in Iowa Monday night. Though the news surely came as a disappointment to O'Malley, he maintained a positive attitude, pledging in a speech to continue supporting the causes he believes in most:

This cause continues. This fight continues. I have never been more proud of the people that have been associated with this campaign; I've never worked with a better group of young American patriotic men and women.

The caucus results weren't the first round of bad news for him Monday. Earlier that day, The Washington Post published an article that proved problematic for O'Malley. The equal pay advocate and combatant of Wall Street corruption reportedly had campaign members working without pay. He had also withdrawn hundreds of thousands of dollars in loans during December, according to a filing by the Federal Election Commission. The article was a harbinger of dwindling momentum, and all fingers pointed to a campaign suspension before the caucuses even began.

Huckabee, on the other hand, announced his resignation from the race via a single tweet. He kept it short and to the point. According to an average of Iowa state polls, Huckabee had slightly over three percent of support statewide. In the Iowa caucuses, his support dropped down to 1.8 percent. The former Governor of Arkansas and Christian minister who championed himself with his religiously-motivated political views most likely lost the evangelical vote to Ted Cruz, who has frequently brought political commentary to churches and ministries in the state. Based on Huckabee's secondary stage placement in the last few debates, his resignation seemed as though it would come in a matter of time. Meanwhile, Donald Trump, Ted Cruz, and Marco Rubio became the most popular candidates among voters and the media.

Though the Democratic race has been narrowed down to just two contenders, over 10 remain on the Republican side. Eventually, several more will have to be weeded out of the mix. Based on the polls, Rick Santorum, Carly Fiorina, and John Kasich aren't doing as splendidly as they had surely hoped. And according to Real Clear Politics' national polling averages, Jeb Bush ranks at just under five percent of support. Although Bush ranks fifth in the polls, it's clear that he's lost a great amount of momentum. His uncertainty has shown in the past GOP debates, when he has been talked over and interrupted by more outspoken candidates such as Donald Trump and Ted Cruz — who, not coincidentally, are the frontrunners of the race.

Aside from Trump, Cruz, and Rubio, Fiorina and Bush have received the most publicity among the remaining candidates, and this popularity may give them something to grasp in the days to come. Regardless of the what the polls say, Americans are at least aware of the fact that they're running. Santorum, who has basically been a ghost in this year's presidential campaign, is more likely to pull out of the campaign first, simply because he has less to lose than the formerly popular candidates.