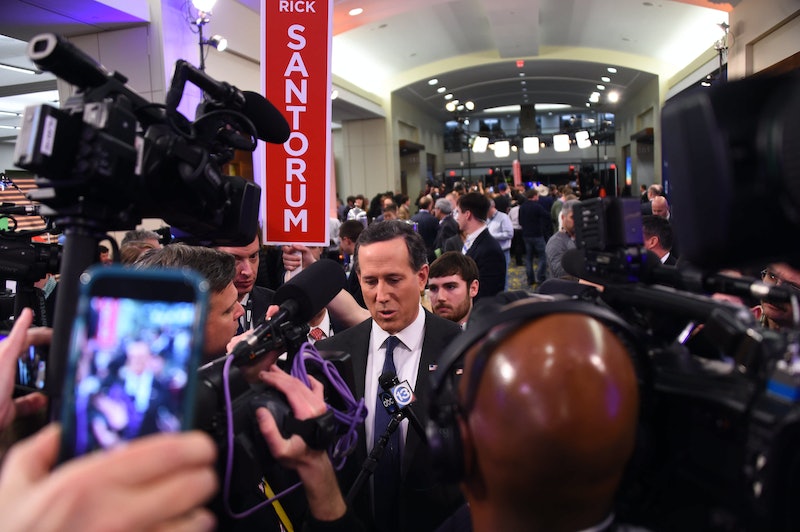 Oh, how the mighty have fallen. Rick Santorum ended the Iowa caucuses in 11th place Monday night. It was a tragic plunge from his performance in 2012, when he claimed a narrow but definitive win over eventual Republican nominee Mitt Romney. All of Santorum's efforts since he announced his campaign in May culminated in only 1,666 votes in Iowa. While he didn't place in dead last, the bottom-of-the-pack finish is not an encouraging sign for his campaign. Yet a Washington Post reporter confirmed that the Santorum train will ride on to South Carolina Tuesday, undeterred by the less-than-stellar performance in Iowa.

It's astonishing that Santorum is still moving on to South Carolina, where he's polling in last place. Mike Huckabee, who similarly won the caucuses eight years ago and finished in ninth this year, officially suspended his own campaign after the results were announced Monday night. One might think that with the continuously dismal numbers, Santorum would bow out sooner rather than later. But it seems that Santorum just isn't ready to give up the fight, and he's counting on an unconventional strategy to help him place higher in South Carolina. The tactical switch means skipping right over campaigning for the primary in New Hampshire ... where he's also polling in last place.

The key to Santorum's strategy might be money. His finances are quickly depleting — as of his last campaign finance report, his campaign had only about $43,000 cash on hand and over $167,000 in debts. Staying put in South Carolina might be cheaper and a better use of resources than fighting the other candidates in New Hampshire. If Santorum is the only candidate sticking it out in South Carolina, then all the advantages of local media and popular campaign stops would be at his disposal.

Four years ago, Santorum carried the evangelical Christian vote to the top of the leader board in the Hawkeye State. But he couldn't pull off the win, or poll more than 1 percent, this year. The former Pennsylvania senator campaigned endlessly, hosting over 700 events in Iowa and dedicating much of his efforts to taking back the state he had once won. But like many of the other candidates, Santorum suffered from the Trump-centric media machine in this election cycle. Combined with his continued relegation to the undercard debates, Santorum never got the opportunity to gain any traction with his campaign, despite the name recognition from his caucus win in 2012.

Santorum staying in the race might not make logical sense, but it's certainly impressive. And who knows, maybe he can pick himself up in South Carolina long enough to get some more financing and a second wind. Stranger things have happened. As long as there's still a race, Santorum's running it until the very end.