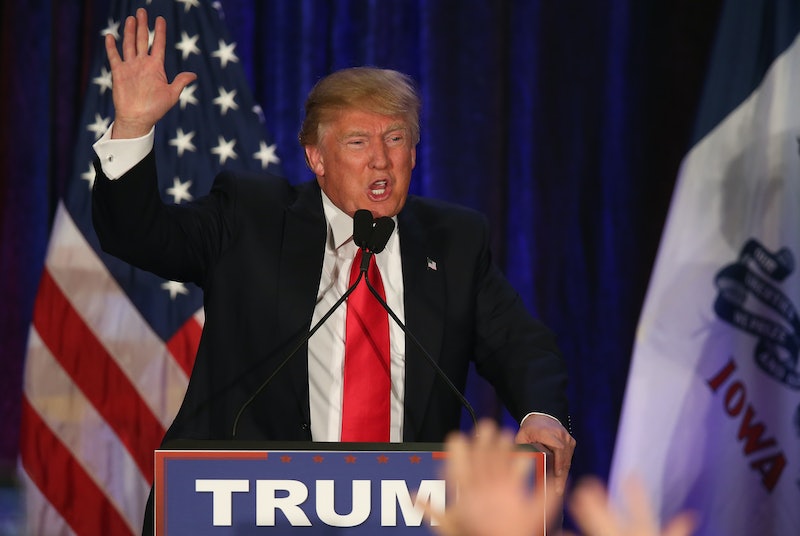 One day after the Iowa caucuses, Donald Trump spoke out about his second-place finish on Twitter. He posted five tweets in the span of an hour, congratulating his own performance and condemning the media. "My experience in Iowa was a great one. I started out with all of the experts saying I couldn't do well there and ended up in 2nd place. Nice," he tweeted first. He then followed up with a concession: "Because I was told I could not do well in Iowa, I spent very little there — a fraction of Cruz & Rubio. Came in a strong second. Great honor."

Trump's tweets are the perfect combination of the humblebrag and a backhanded compliment. By brushing off Iowa as something that was never that important in the first place, he made his campaign look effortlessly successful, and gave the impression that Ted Cruz only won because Trump didn't care. He also implied an imminent win in the New Hampshire primary next week, where he's polling 21 points above current second-placers Ted Cruz and John Kasich. Though technically a loss, Trump's relative success in Iowa is still a sign of his campaign's strength.

Furthermore, Trump's claims about spending are totally true. The billionaire, who's funding the majority of his campaign with his personal coffers, has spent astonishingly little on advertising, relying on free media exposure to bolster his visibility. By contrast, Ted Cruz spent $1.1 million on advertising just in the two weeks leading up to Iowa. Clearly, Trump's strategy has been effective — he's barely gone a day without making national headlines since his campaign announcement. As a result, he's been able to save his billions for other things, like merchandising and event spaces.

Trump then turned his tweeting toward his "unfair" treatment by the media, stating that he "brought in record voters and got second highest vote total in history" and no one gave him credit. This year's Iowa caucus did indeed shatter the record from 2012, with a jump from 122,000 caucus-goers to over 182,000. But Trump's claim that he was the one who brought in those huge numbers can't be verified, and also just doesn't seem likely. Trump lost the top spot to Cruz by nearly 6,000 votes, so if he had been the sole reason for the historic turnout, he probably would have pulled off a win.

Finally, the at-first well-constructed tweet spree fell apart at the end, when Trump attacked the voters for not giving him credit for his self-financed campaign. Hopefully, he sees the inherent logical fallacy there — great, you're not taking money from billionaires, but you are a billionaire. Not exactly a huge distinction there, Donald.

Trump's saltiness about losing Iowa was well-disguised, but it's definitely inherent in his Twitter post-game breakdown.