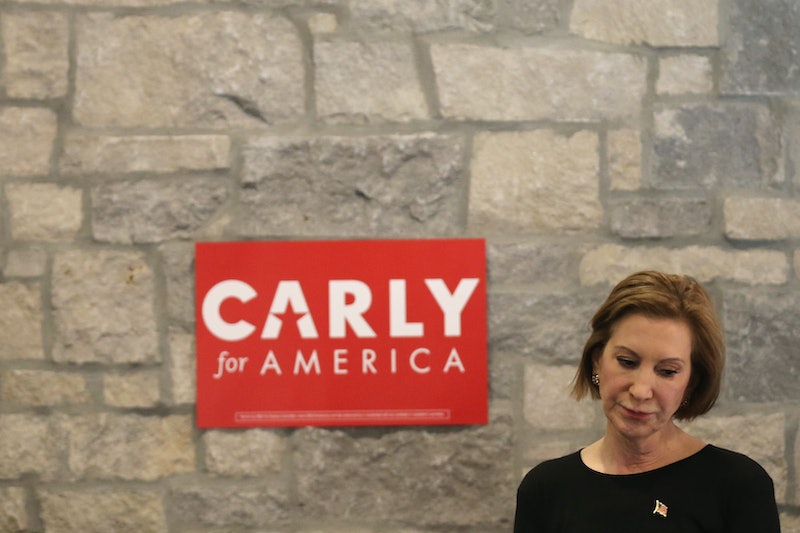 After Monday night's Iowa caucus results were released, two candidates — Martin O'Malley and Mike Huckabee — decided enough was enough. Their numbers in the polls just weren't cutting it. With over ten candidates remaining, the pool of GOP candidates needs to dwindle even more in the near future. By opting out of a post-caucus campaign speech in Iowa, Carly Fiorina didn't leave her supporters assured of her continued participation in the long run. Her diminishing support and presence in the political sphere has sparked grim speculation that she may be next to drop out of the presidential race.

Early on, Fiorina had immense media presence and support. As the only woman running in the Republican party, she claimed to champion women's rights — both Democrats and Republicans can get on board with that — but aggressively opposed Planned Parenthood and abortion, a standpoint many women oppose. Currently, the former Hewlett-Packard CEO comes in at second-to-last in the national polls, with less than two percent of support. The decline becomes particularly apparent after taking a look at October's Iowa polls, where she ranked third.

Fiorina's decision to board a plane instead of addressing Iowa is not an indicator of strength in the days to come. Even so, Fiorina's campaign defended her choice to head straight to the airport, playing it off as a sign that she was simply eager to arrive at her next stop in New Hampshire. Her press secretary, Anna Epstein, sent an email assuring the public that Fiorina is not suspending her campaign:

We are definitely headed to (New Hampshire) on Wednesday (morning) for a full schedule of events before the primary.

We know that she is going to continue to exceed expectations, and that’s why we’ve built an organization that is prepared to go the distance.

But have Fiorina's actions sent a message that suggest she's willing to go the distance? Or has she suggested that instead she's losing some steam on the campaign trail? Chip Felkel, a veteran Republican strategist in South Carolina, commented on Fiorina's decreasing popularity in an interview with The Washington Post's Abby Phillip. According to Felkel, Fiorina is being drowned out by bigger personalities, one of whom also happens to be a political outsider:

An anti-establishment candidate without a voice can't get very far in this race. In fact, both Fiorina and Rand Paul were excluded from the main Jan 14 GOP debate, which occurred just over two weeks before the Iowa caucuses. Thus, Fiorina lost the chance to address America on prime-time television at a particularly pivotal moment. The morning before the debate, NPR's David Greene interviewed Fiorina and asked her about her poll numbers, which had been declining for the past couple of months. She said:

I mean, the polls are not this precise. I think this is what happens when the RNC outsources decision-making to the media and the media decides they want to show. But I'm going to talk to the American people every chance I get. And I'll talk to them about why we have to take our country back, and why I am the best candidate to beat Hillary Clinton and to lead this nation in these difficult times.

But after losing badly in Iowa, Fiorina did not take "every chance" she got to speak to the American people. In fact, she forewent what may have been the most important opportunity to let America know that when she says she's still in the race, she means it. Even so, Iowa's caucus couldn't have been an easy event for her to lose, especially to her main opponent, Hillary Clinton. While endorsing her own candidacy, Fiorina often spoke about how she and Clinton differ:

Unlike Fiorina, Clinton won her party's caucus, though by less than a point. In her NPR interview, Fiorina also stood by the opinion that Donald Trump cannot win against Clinton. If that's the case, she has some real work to do if she wants to catch up with both of her rival candidates. Speaking at public events may be the first step.